Working with Children in Columbia

How does visiting a farm, trekking up a mountain side, making origami flowers and fantasy animals instill good moral values and a sense of brotherhood within children? As our Featured Project The TOS in Colombia may have the answer, as their continuing work with children shows.

Many of our TOS Sections support the scholastic and moral education of children in one way or another. Some build or run schools or orphanages. Some volunteer at these types of institutions, and others lend financial support or give material gifts. Children are our future, our hope for a better world. As theosophists we want to encourage positive values and the theosophical world view of spiritual transformation and oneness to children, as we ourselves model them.

For the TOS in Colombia, and at the Blavatsky Lodge, working with needy children has been their foremost service activity for a number of years. In Colombia this takes the form of clubs. The Home Michin Club and the Casa “Ester Julia” work with girls. A club for boys was formed in Casa “Tea-Kurt Weis” on 3 February 2014. Dr Ruth Guan, a TS member, coordinates that group. 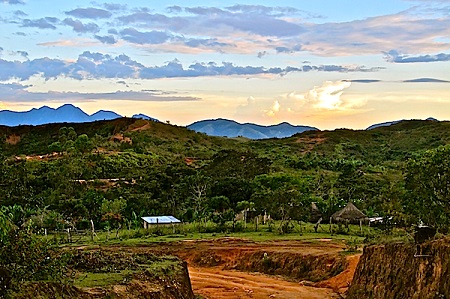 Approximately 30 girls participate in the activities at Casa “Ester Julia” each week. The activities are many and varied. Meditation practices are foremost as the Blavatsky Lodge and the TOS meditate in the mountains every Saturday morning. The girls also join in on discussions of family and other human relationships and are encouraged to view them with a Theosophical perspective. Films with theosophical messages, singing, mandala painting and workshops on angels are also presented. The girls learn reverence and find joy as well in performing ceremonies, such as the Golden Chain ceremony, the Light ceremony and the Offers to the Mother ceremony.

The Golden Chain of Love ceremony comes from the Round Table, a children’s organization that can be found all over the world. The Round Table has a special link with the TOS. It emphasizes service and is a kind of children’s symbolic lead-in to the TOS. It was founded the same year as the TOS and was the fruit of that whole same generation of wonderful idealists who fought for social justice.
The girls contacted nature this year by going to the farm “Cathay” where they had life experiences that increased their strength and moral values.

Their playful activities began by learning key factors about the region and the farm and getting an outline of the day’s activities. The first order of the day, before continuing, was to change into clothing appropriate for getting wet and muddy. It wasn’t long before they found out why as a long walk took them to a waterfall where they scampered over rocks getting completely wet in the process. The rock climbing offered various degrees of difficulty, but the girls soon got over any fears by turning their attention to helping each other over the rocks. After a rest to cool off the girls showed their sense of balance, equilibrium, strength and skill by using bamboo poles to cross a shallow well of mud. Each one patiently waited for her turn to cross respecting their friends’ differences in degrees of skill. Later the group used teamwork to leap over a big well. They continued up the side of the mountain with the help of a rope, the climb being somewhat difficult because the ground was wet. Upon arriving at the summit the energetic group threw themselves onto a big slide/toboggan. They returned to the farm in lively good spirits. Later, after lunch settled, they had fun in the swimming pool. Their wonderful day elapsed in the most complete harmony with nature and all others. There was joy and a good attitude towards God, nature and their hosts on the farm who had treated them so well.

In the House of “Tea-Kurt Weis” a group of approximately 15 boys met every Wednesday. The boys took part in workshops on meditation, mental exercise and sensibility. Sensitivity to classical music and creativity was stressed, and many artistic endeavors, such as painting and caricature, coloring mandalas, drawing and dance were pursued. A reading club was also formed. The boys read the book Journey to the Stars by Jules Verne, part of The Legends of King Arthur by Margaret Simpson and The Knight in Rusty Armour by Robert Fischer. This book tells the story of a knight who, while trying to get out of the rusty armour that is stuck to him, learns the lessons of true knighthood. 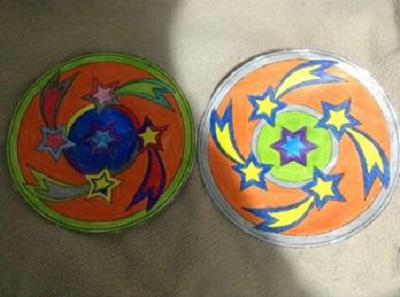 In the Casa “Tea-Kurt Weis” reading club the boys read Journey to the Stars by Jules Verne, author of Voyages Extraordinaires, a popular adventure series that included Journey to the Centre of the Earth and Around the World in Eighty Days. These colored mandalas, made by the boys, seem to represent a journey to the stars.

In the reading club concentration techniques such as sounded reading and questioning about what had been read were used in order to reinforce attention. Mutual respect in accepting the reading skills, or lack thereof, of each reader was also learned. Each of the teachings and workshops were presented like a game in accordance with new educational methods. Reflection on moral values was always encouraged as well.
Through workshops carried out by means of table games the boys worked on respect and sharing besides mental development. In an origami workshop they made lotus flowers that were used as decorations in the TS’s White Lotus Day celebrations. Two children, a boy and a girl, assisted in the celebration. In another workshop the children used their imaginations to create fantasy animals with parts from different animals. Throughout all of their work with children the TOS Colombia always encourages the values reflected in The Golden Chain of Love. 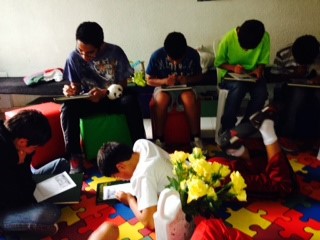 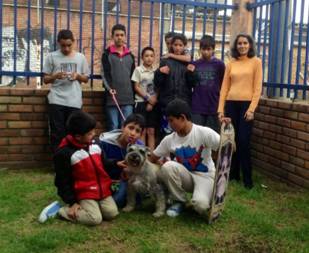 We have 289 guests and no members online