Good News from Finland and Estonia

This report was sent to TF by Mirva Jaatinen, General Secretary Finnish Section of the TS.

The Finnish Section had the great pleasure of hosting International President Tim Boyd and his family from 7th to 14th August on their first ever visit to Finland and Estonia. The visit began with a weekend seminar of Theosophical sister organizations in Kreivila, the summer course centre of the Finnish Section. There Tim gave a lecture titled The Imprint of Theosophy and participated in an English speaking discussion group. The seminar was well attended with approximately 70 participants. 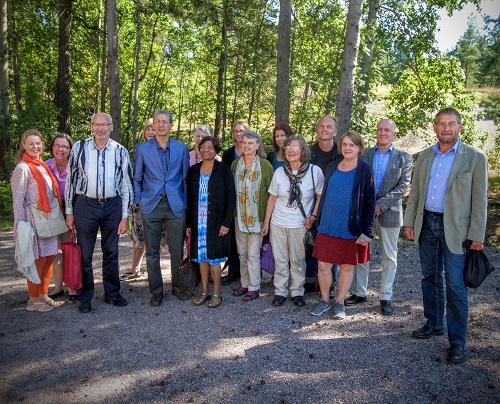 From Kreivila Tim and family proceeded to Helsinki where he gave a lecture on August 9th with the title The Solution to all problems. Approximately 80 listeners were eager to hear what that solution might be. Before the lecture Tim met a group of thirteen Swedish TS members, who had come to Finland to attend the lecture and meet him. The lectures held in Finland can be watched online at https://vimeo.com/135812804 and https://vimeo.com/135761932 .

On Tuesday August 11th it was time to make a daytrip by ferry to Tallinn, Estonia. After a two hour guided tour of the old town with a group of Estonian and Finnish Theosophists, the participants had a nice lunch together, after which it was time for Tim’s lecture entitled The Forgotten Truths. Approximately 40 listeners came to listen to the lecture. After that there was a meeting with members, at the end of which a newly accepted member of Tallinn’s HPB lodge received her membership diploma from Tim. 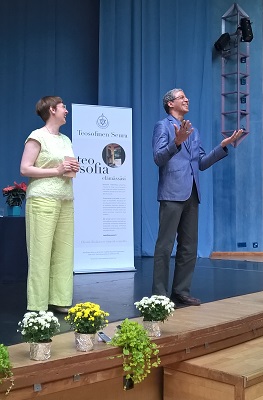 Translator and GS Mirva Jaatinen on stage with Tim

On Wednesday 12th it was time to have a members meeting at the TS headquarters in Helsinki, with about 40 members attending. Discussion there covered quite a variety of practical questions. Based on the comments heard after the events it was very clear that the Finnish, Estonian and Swedish members were very delighted, happy and impressed to get to know our new international president and they hope to meet him and his family again soon.