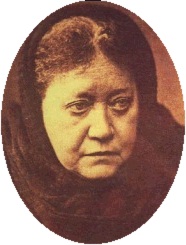 [The opening verses of Fragment 3 of The Voice of the Silence.]

196. “Upadhyaya,1 the choice is made, I thirst for Wisdom. Now hast thou rent the veil before the Secret Path and taught the greater Yana2. Thy servant here is ready for thy guidance.”

197. ’Tis well, Shravaka.3 Prepare thyself, for thou wilt have to travel on alone. The Teacher can but point the way. The Path is one for all, the means to reach the goal must vary with the pilgrims.

198. Which wilt thou choose, O thou of dauntless heart? The samtan4 of Eye Doctrine, fourfold Dhyana, or thread thy way through Paramitas5, six in number, noble gates of virtue leading to Bodhi and to Prajna, seventh step of Wisdom?

199. The rugged Path of fourfold Dhyana winds on uphill. Thrice great is he who climbs the lofty top.
200. The Paramita heights are crossed by a still steeper path. Thou hast to fight thy way through portals seven, seven strongholds held by cruel crafty powers—passions incarnate.

201. Be of good cheer, disciple; bear in mind the golden rule. Once thou hast passed the gate Srotapatti6, "he who the stream hath entered"; once thy foot hath pressed the bed of the Nirvanic stream in this or any future life, thou hast but seven other births before thee, O thou of adamantine Will.

202. Look on. What seest thou before thine eye, O aspirant to god-like Wisdom?

203. “The cloak of darkness is upon the deep of matter; within its folds I struggle. Beneath my gaze it deepens, Lord; it is dispelled beneath the waving of thy hand. A shadow moveth, creeping like the stretching serpent coils. . . . It grows, swells out, and disappears in darkness.”

204. It is the shadow of thyself outside the Path, cast on the darkness of thy sins.

205. “Yea, Lord; I see the Path; its foot in mire, its summit lost in glorious light Nirvanic. And now I see the ever narrowing Portals on the hard and thorny way to Jnana [‘Knowledge, Wisdom.’]”

GLOSSARY
1. Upadhyaya is a spiritual preceptor, a Guru. The northern Buddhists choose these generally among the Naljor, saintly men, learned in gotrabhu-jnana and jnana-darshana-shuddhi, teachers of the Secret Wisdom.

2. Yana—vehicle; thus Mahayana is the "Great Vehicle," and Hinayana, the "Lesser Vehicle," names for two schools of religious and philosophical learning in Buddhism.

3. Shravaka—a listener, student who attends to the religious instructions. From the root shru. When from theory they go into practice or performance of asceticism, they become Shramanas, "exercisers," from shrama, action. As Hardy shows, the two appellations answer to the words akoustikoi and asketai of the Greeks.

4. Samtan (Tibetan), the same as the Sanskrit Dhyana, or the state of meditation, of which there are four degrees.

5. Paramitas, the six transcendental virtues; for the priests there are ten.

6. Srotapatti—(lit.) "he who has entered the stream" that leads to the Nirvanic ocean. This name indicates the first Path. The name of the second is the Path of sakridagamin, "he who will receive birth (only) once more." The third is called anagamin, "he who will be reincarnated no more," unless he so desires in order to help mankind. The fourth Path is known as that of Rahat or Arhat. This is the highest. An Arhat sees Nirvana during his life. For him it is no post-mortem state, but Samadhi, during which he experiences all Nirvanic bliss. [How little one can rely upon the Orientalists for the exact words and meaning, is instanced in the case of three "alleged" authorities. Thus the four names just explained are given by R. Spence Hardy as: 1. Sowan; 2. Sakridagami; 3. Anagami; and 4. Arya. By the Rev. J. Edkins they are given as: 1. Srotapanna; 2. Sagardagam; 3. Anagami; and 4. Arhan. Schlagintweit again spells them differently, each, moreover, giving another and a new variation in the meaning of the terms.]

We have 422 guests and no members online