The Mystery Schools of Today 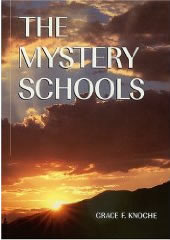 The Brotherhood of great ones never deserts humanity. Underneath and behind and within there pulsates the eternal heart of compassion. Withdrawal of the Mystery-Schools from public knowledge by no means indicates withdrawal of the perennial support of the Mahatmas. Mystery-centers are to be found today all over the world, writes H. P. Blavatsky, for "the Secret Association is still alive and as active as ever" (Isis Unveiled 2:100). Guarded with jealous care by their protectors, the precise location of these schools is undiscoverable except by the worthy; however, a veil of secrecy is not synonymous with nonexistence.

Does the physical body remain alive and functional if the heart ceases to pump blood into the circulatory system, if the organs do not receive their vital flow from the heart? Thus with the spiritual body of the earth, whose mystic heart is Sambhala, and from whose ventricles flows forth into organic centers the esoteric life-blood of the Brotherhood. Every Mystery-center is an organic focus, every human being is a living cell. All owe spiritual allegiance to the central heart. Is it logical to infer that a heart beats in vain? Is it logical to infer that organs function apart from the heart? Such conclusions are against reason or experience.

Three are the distributions, therefore, of this esoteric life-flow:

(1) Through the exoteric and the esoteric Mysteries. The exoteric or Lesser Mysteries are now "largely replaced by the different activities of the Theosophical Movement, which itself is exoteric as a Movement'' (Studies in Occult Philosophy, p. 637). The esoteric or Greater Mysteries, because of the weight of matter blinding the world-consciousness, are at present far more carefully hid. Significantly, just because of the increased need for light and truth, "the esoteric groups of Mystery-Schools are perhaps more numerous today than they have been for thousands of years'' (ibid.).

This fact is of far-reaching importance for seekers after truth. Once the power and force of the ancient wisdom seizes the citadel of the heart, one may receive not only genuine spiritual uplift through contact with the exoteric Mysteries but, more importantly, he places himself in direct line of inspiration from the esoteric Mysteries, the seats or organic centers of the Brotherhood.

(2) Through organic foci of national compass. In the circulation of spiritual influences all countries are in magnetic and sympathetic vibration with Sambhala. Every great country has its esoteric centers:

"Thus a little country like the Netherlands might be the center of a secret Mystery-School whose ramifications and influence would extend over half of Europe. . . . Yet as a matter of fact, every single National unit of the globe has its own secret spiritual protectors, who as a body form a true esoteric center. We can call these the Occult Guardians of a people. Thus Britain has hers, Germany has hers, Russia has hers, likewise so with Switzerland, France, Italy, Spain, Portugal, China, India, Japan, the United States, Mexico, Canada, Brazil, etc., etc., etc." (ibid.)

These national occult guardians do not meddle in political affairs; their work is "purely spiritual, moral, intellectual, and wholly benevolent, and indeed universal, and is a silent guide to the intuitive minds of the different races'' (ibid., p. 638).

(3) The third channel of esoteric work is one of the most fascinating, yet least recognized: that of preserving the knowledge from age to age.

"There are actually groups whose sole business is forming occult centers of Initiation, preparation of students for esoteric work in the world, and for the safeguarding of priceless treasures, the heirlooms of the human race, treasures both intellectual and material." (ibid., p. 637)

The generations of seers are not wasteful, nor are the grand systems of philosophy and religion lost in the darkness of receding ages. All that is of essential spiritual value is preserved in the secret archives of the planet:

"There are, scattered throughout the world, a handful of thoughtful and solitary students, who pass their lives in obscurity, far from the rumors of the world, studying the great problems of the physical and spiritual universes. They have their secret records in which are preserved the fruits of the scholastic labors of the long line of recluses whose successors they are. The knowledge of their early ancestors, the sages of India, Babylonia, Nineveh, and the imperial Thebes; the legends and traditions commented upon by the masters of Solon, Pythagoras, and Plato, in the marble halls of Heliopolis and Sais; traditions which, in their days, already seemed to hardly glimmer from behind the foggy curtain of the past; — all this, and much more, is recorded on indestructible parchment, and passed with jealous care from one adept to another. (Isis Unveiled 1:557-8)

Some day worthy explorers will recover the lost keys, and mystery after mystery will be solved; temples will be unearthed; secrets of the initiatory chambers revealed; the occult history of the planet and human races unfolded. When? At the appointed hour, an hour not fixed by whim or fancy, but brought into being as the third eye now "most carefully hidden and inaccessible" opens once again in esoteric birth.

According to Purucker, the chief of these hid centers has its home in Sambhala, with branches in Syria, Mexico, Egypt, the United States, and Europe, each one "subordinate to the mother-group of the Occult Hierarchy in Sambhala" (Studies in Occult Philosophy, p. 637).

In The Mahatma Letters a wonderful description is given by Master M of a secret retreat in which his brother and friend KH enters the silence of further initiation. Masters, though vastly superior to us, are still human beings — grandly human, but human nevertheless — and must undergo further testing, but such initiations are of supernal character. Of the trial of his co-worker, Master M writes:
"Two days later when his [KH's] 'retreat' was decided upon, in parting he asked me: 'Will you watch over my work, will you see it falls not into ruins?' I promised. What is there I would not have promised him at that hour! At a certain spot not to be mentioned to outsiders, there is a chasm spanned by a frail bridge of woven grasses and with a raging torrent beneath. The bravest member of your Alpine clubs would scarcely dare to venture the passage, for it hangs like a spider's web and seems to be rotten and impassable. Yet it is not; and he who dares the trial and succeeds — as he will if it is right that he should be permitted — comes into a gorge of surpassing beauty of scenery — to one of our places and to some of our people, of which and whom there is no note or minute among European geographers. At a stone's throw from the old Lamasery stands the old tower, within whose bosom have gestated generations of Bodhisatwas. It is there, where now rests your lifeless friend." (Letter 29, p. 217 [chronological ed. p. 87])

There within the Sanctuary are "gestated generations of Bodhisattvas," among whose esoteric purposes is the enlightenment of humanity. Through all the heartache and sorrow of the world, this strong network of occult vitality flows in unceasing rhythm along the invisible arteries and veins of the body spiritual of our earth. So profound is the compassion of the Brotherhood, so untiring its labor, that not until the heartbeat of every human being shall pulsate in harmony with the heartbeat of the Great Brotherhood will it lay down its task.