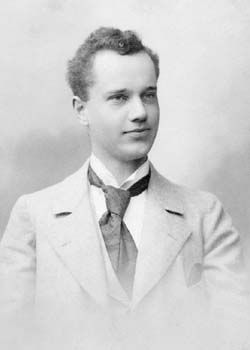 Head of the Theosophical Society (now headquartered in Pasadena) from 1929 to 1942. Born in Suffern, New York, on January 15, 1874, Purucker was destined for the clergy by his father, an Anglican minister who in the late 1880s was chaplain of the American church in Geneva, Switzerland. There Purucker’s education stressed Latin, Hebrew, Greek, and the writings of the early Church Fathers. He enrolled in the Collège de Genève, but left school and went to America, settling in San Diego County. There he read a translation of the Upanishads and learned Sanskrit. In 1893 he joined the San Diego Lodge of the Theosophical Society (Adyar) and soon was leading a class on The Secret Doctrine.

Purucker returned to Europe for several years, in 1899-1900 working on the editorial staff of the Paris Daily Messenger. In 1903 he joined the headquarters staff of Katherine Tingley’s Theosophical Society, which she had moved from New York City to Point Loma, California, in 1900. He studied and taught at the Theosophical University, where he received a doctorate in literature and held the chair in Hebrew and Sanskrit.
Following Tingley’s death in 1929, Purucker assumed leadership of the Society, changing the emphasis from practical social action to study of Theosophical teachings. Under Purucker, the headquarters published periodicals, such as The Theosophical Forum, as well as various Theosophical and Eastern philosophical classics. Purucker also attempted to establish good will among members of the various Theosophical organizations and to arrange discussions among Theosophical officials of different societies in a program known as the Fraternization Movement. Shortly before his death on September 27, 1942, he moved the international headquarters to Covina, California, near Los Angeles.

The hallmark of Purucker’s writings is a coherent presentation of the fundamental ideas of Theosophy.  Fundamentals of the Esoteric Philosophy, edited from lectures delivered to esoteric students in the 1920s, is a basic introduction. Beginning with the three fundamental propositions of The Secret Doctrine, it develops the concepts that underlie Blavatsky’s masterwork. The Esoteric Tradition, in two volumes, concentrates on karma, reincarnation, death and rebirth, and Theosophy’s relation to science, religion, and philosophy. The Occult Glossary explains some 300 terms frequent in Theosophical writings. Man in Evolution is a clear, detailed examination of Theosophical ideas in relation to modern science, particularly the concepts of matter, life, and evolution. Golden Precepts discusses the wonder of life, spiritual growth, selfless love, old age and death, and compassion. Fountain-Source of Occultism, prepared posthumously from booklets for his private students, is an in-depth presentation of concepts from The Secret Doctrine. Other publications include the three-volume Dialogues of G. de Purucker, Wind of the Spirit, Studies in Occult Philosophy, The Four Sacred Seasons, Messages to Conventions, and Questions We All Ask.

One of Purucker’ s favorite grouping of teachings is the “seven jewels”: reimbodiment, karma, hierarchies, svabhava or self-becoming, evolution, the two paths of growth, and atma-vidya or self-knowledge. He emphasized that study of Theosophy leads to a union of heart and mind and to the cultivation of compassion, which arises naturally from a realization of our oneness with all that is.

We have 463 guests and no members online