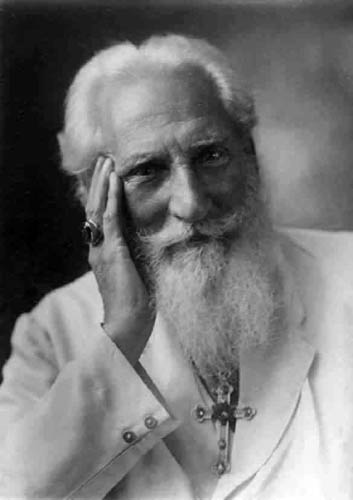 An English clergyman and Theosophical author in the generation following Blavatsky. He was born at Stockport, Cheshire, on February 16, 1854. He became a priest in the Church of England in 1879, but became interested in Spiritualism and, after reading A. P. Sinnett’s Occult World, join the Theosophical Society 1883. He met Madam Blavatsky in1884 and followed her to India, where he developed his power of clairvoyance.

In much of 1886-9, Leadbeater directed educational and Theosophical work in Ceylon, where he met the thirteen-year-old C. Jinarajadasa, whom he took to England in 1889 to be educated there. He also tutored George Sydney Arundale and A. P. Sinnett’s son, Dennis. Leadbeater increased his occult investigations, which led to publication of The Astral Plane (1894), The Devachanic Plane (1895), and, in collaboration with Annie Besant, papers that resulted in Occult Chemistry (1908). In these works, Leadbeater presented clear, distinct, easily visualized word-pictures of forces, entities, and patterns of life on the inner planes. Thought Forms (1905), also in collaboration with Annie Besant, had a remarkable influence on modern art, especially through Wassily Kandinsky, by its vivid color illustrations representing the subtle energy patterns of various moods and feelings, as seen clairvoyantly. In 1899, Leadbeater published The Christian Creed, followed by Man Visible and Invisible (1902), An Outline of Theosophy (1902), and The Other Side of Death (1903).
In 1906, Annie Besant received letters from officials of the American Section and the Esoteric School in America, charging that Leadbeater had taught masturbation to boys approaching puberty, and demanding that he be expelled. He admitted having done so in a few cases, on therapeutic and occult grounds. Victorian attitudes toward “self-abuse” were quite different from those of today, so Olcott appointed an investigative committee, and subsequently Leadbeater resigned from the Theosophical Society. This hiatus in his Theosophical career did not last long. In December 1908, after Besant had succeeded Olcott as President, the General Council of the Society voted to reinstate Leadbeater, and he returned to Adyar.

During the next six years, in association with Besant, Leadbeater did some of his most significant work. In 1909, he discovered the boy J. Krishnamurti. The Inner Life (1910-1) and The Hidden Side of Things (1913) present Leadbeater’s Theosophical view of human nature and life. In 1910, he began a series of articles on the past lives of Theosophists, later published, in collaboration with Annie Besant, as Man: Whence, How and Whither (1913). In 1914, Leadbeater moved to Sydney, Australia, where he was spiritual supervisor for a group of Theosophical boys and girls from Australia, Java, India, and the U.S. In 1922, he settled in the Manor, a mansion on Sydney Harbor, which is still a center of Theosophical work.

A controversy arose between Leadbeater’s “Neo-Theosophy” and a “Back-to-Blavatsky” movement. The charge of innovation was partly provoked by Leadbeater’s work with Co-Masonry and the Liberal Catholic Church. In 1915 James Ingall Wedgwood initiated Leadbeater into Co-Masonry and in 1916 consecrated him as a bishop, both being enthusiasts for a ceremonial expression of Theosophy. Leadbeater published The Science of the Sacraments and The Hidden Side of Christian Festivals in 1920 and The Hidden Life in Freemasonry and Glimpses of Masonic History in 1926. In 1923 Leadbeater became Presiding Bishop of the Liberal Catholic Church. He published The Masters and the Path in 1925 and The Chakras in 1927.

In 1929 the enthusiasm over the World Teacher and the Order of the Star in the East came to a dramatic end with Krishnamurti’s renunciation of his former role. Leadbeater moved back to Adyar from Australia that fall, saying only that “the Coming has gone wrong.” He died in 1934.

Leadbeater is a monumental presence in the history of Theosophy. He never argued, never wavered, rarely retracted or admitted error. He simply went on telling what he saw with his clairvoyant sight, as though reporting objects viewed through a telescope, to companions without benefit of that lens. He had the perfect self-confidence in his opinions of many men of his era, with little capacity for questioning or self-analysis. Bishop Sten von Krusenstierna of the Liberal Catholic Church, in his preface to the 1972 edition of The Inner Side of Christian Festivals, described Leadbeater in these terms: “His personality was that of a conservative Victorian gentleman, who at the same time could be very unconventional, both in ideas and behavior when he considered it right. . . . He would never defend himself against criticism, neither would he criticize others” (p. vi).