Message from Abraham Oron, Chairman of the Theosophical Society in Israel

Warmest greetings from Israel and all the Israeli Theosophists.

Between the May 12-14 2011 around 140 supporters of interfaith dialogue, Muslims, Christians, Jews, Hindus, Druze, Buddhists, and Baha'is, from different nationalities and backgrounds, met for 3 intensive days in Neve Shalom village which is situated about 30 km from Jerusalem. 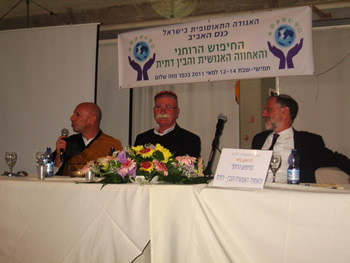 A Buddhist, a Druze sheik, and a Rabbi in a panel

Members and non-members of the Theosophical Society, religious scholars, members of interfaith dialogue organizations, and musicians gathered to connect, build relationships, and inspire one another; gaining strength and insights from the different views of the One Divine Wisdom which are found in the religions and embodied in the principles of Theosophy. 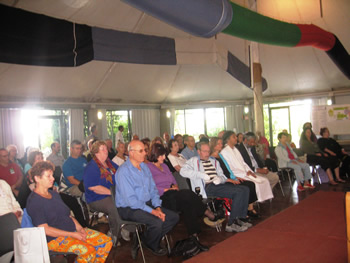 We listened to each other with the conviction that only through mutual understanding and respect for the religion of the other can brotherhood be achieved.

We feel that the second object of the Theosophical Society namely: the study of comparative religion, philosophy and science, involves much more than study. This is a very important tool to be used for promoting peace and brotherhood through the discovery of the common spiritual truths shared by all religions.

In the attached presentation* there are some of these fundamental universal truths which are found in the sacred teachings of the religions, and which were included in a booklet distributed in the convention. 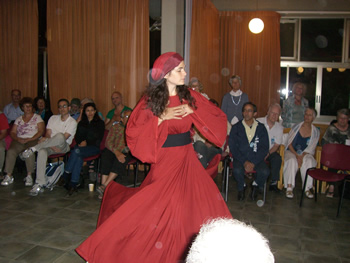 A Sufi in a darvish dance

In the dialogues we had with the religious scholars before and during the convention, we were greatly impressed by their openness to Theosophical ideas, and their sincere desire to promote the spirit of peace and brotherhood between nations and religions.

There is so much work to be done in order to bridge the gulf of fear, mistrust, and sometime hatred between the followers of the different religions in Israel. But we feel that even a small gathering, such as we had, can point the way of practical spirituality, which involves the discovery of the spiritual or the "sweet voice" in the hearts of those who are very much different from us.

During the convention many of us felt the presence of a spirit of peace and grace that inspired us and remained with us all the three days, making us feel that this gathering is in harmony with the aims of Theosophy and that maybe Theosophists all over the world should initiate more gatherings of this kind. 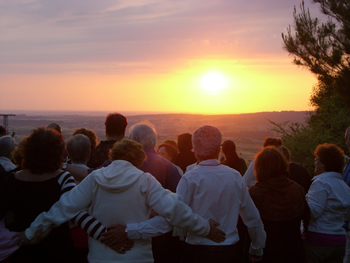 Brotherhood and a sunset on Shabbat evening

I would like to thank our International President Mrs. Radha Burnier for her written address to the convention, and all our Brother Theosophists all over the world for sending us their written greetings and hearty good wishes.

We thank Brother Maithreya and his wife Sunita for coming all the way from India to share with us their deep knowledge of Theosophy and Hinduism. 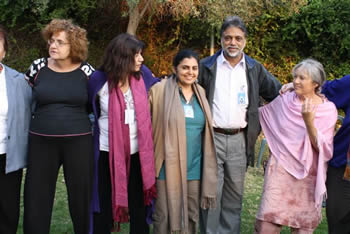 Maithreya and Sunita from India, dancing and making new friends in Israel

We send our hearty thanks to all the honored religious scholars, interfaith organization representatives and musicians.

And last, but not least, a big thank you to Bracha Elron and Daphna Koren my dedicated assistants and all the devoted TS members who invested so much thought and effort in making this convention possible.

Abraham Oron
Chairman of the Theosophical Society in Israel

For the attached presentation “The Story of an Interreligious Convention”, click here.