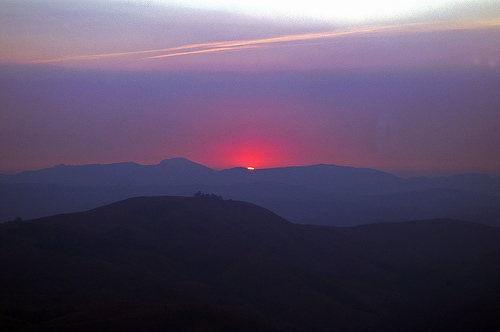 [The following is the first paragraph of a letter, whose text is on the Web site Blavatsky Archives Online (www.blavatskyarchives.com/hpbwqj81287.htm) as part of a series of letters compiled by Dara Eklund and Nicholas Weeks; the present notes have been added by Theosophy Forward editors.]

To explain my telegram of today know, that for several days I kept thinking over your letter & that of Coues1 — feeling the great responsibility you wanted me to assume. The night before last, however, I was shown a bird's eye view of the present state of Theosophy & its Societies. I saw a few earnest reliable Theosophists in a death struggle with the world in general, with other — nominal but ambitious — theosophists. The former are greater in number than you may think, & they prevailed, as you in America will prevail, if you only remain staunch to the Masters' programme and true to yourselves. And last night I saw

2 & now I feel strong — such as I am in my body, and ready to fight for theosophy & the few true ones to my last breath. Are you ready to help me carry on the sacrifice — that of accepting & carrying on the burden of life which is heavy? My choice is made & I will not go back on it. I remain in England in the midst of the howling wolves. Here I am needed & near to America, there, in Adyar — there are dark plots going on against me & poor Olcott (which you will understand better by reading Bert's3 letter & the enclosed one from Olcott) and I could only defend myself — not do any good to the Cause or Society. The defending forces have to be judiciously — so scanty they are — distributed over the globe wherever Theosophy is struggling against the powers of darkness. Let O. remain at Adyar — I will remain here. If you & Coues carry out the plan we will have four great & strong centres America, Paris, India, England.

1. Elliott Coues (1842-99) was a military surgeon during and after the American Civil War. He was an ornithologist who helped to establish the trinomial taxonomic classification of birds, generally adopted for all branches of zoology. He was also a spiritualist and a member of the Theosophical Society. His strong desire to become leader of the Society in America, when frustrated, led him to publish highly critical comments about Blavatsky in the New York Sun of July 20, 1890 (http://www.blavatskyarchives.com/coues.htm). Blavatsky sued for libel, an action ended by her death the following year. The Sun subsequently retracted Coues’s charges and apologized for publishing them.

2. Three triangular dots were used as a glyph by and for Blavatsky’s esoteric teacher, Master Morya.

3. Probably Bertram Keightley (1860-1944), a prominent Theosophical worker who helped to prepare The Secret Doctrine manuscript for publication. She inscribed a copy of the work to him with the words “To Bert Keightley, one of those to whom this work is dedicated” (www.blavatskyarchives.com/signature.htm). The dedication to which the inscription refers is “to all True Theosophists, / In every Country, / And of every Race, / For they called it forth, and for them it was recorded.”