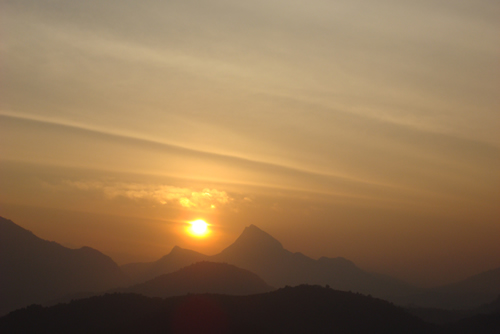 Student. — What is the Sanskrit name for this age, and what is its meaning?

Sage. — The Sanskrit is “kali,” which added to “yuga” gives us “Kali Yuga.” The meaning of it is “Dark Age.” Its approach was known to the ancients, its characteristics are described in the Indian poem the Mahabharata. As I said that it takes in an immense period of the glorious part of Indian history, there is no chance for anyone to be jealous and to say that we are comparing the present hour with that wonderful division of Indian development.

Student. — What are the characteristics to which you refer, by which Kali Yuga may be known?

Sage. — As its name implies, darkness is the chief. This of course is not deducible by comparing today with 800 A.D., for this would be no comparison at all. The present century is certainly ahead of the Middle Ages, but as compared with the preceding yuga it is dark. To the occultist, material advancement is not of the quality of light, and he finds no proof of progress in merely mechanical contrivances that give comfort to a few of the human family while the many are in misery. For the darkness he would have to point but to one nation, even the great American republic. Here he sees a mere extension of the habits and life of the Europe from which it sprang; here a great experiment with entirely new conditions and material was tried; here for many years very little poverty was known; but here today there is as much grinding poverty as anywhere, and as large a criminal class with corresponding prisons as in Europe, and more than in India. Again, the great thirst for riches and material betterment, while spiritual life is to a great extent ignored, is regarded by us as darkness. The great conflict already begun between the wealthy classes and the poorer is a sign of darkness. Were spiritual light prevalent, the rich and the poor would still be with us, for karma cannot be blotted out, but the poor would know how to accept their lot and the rich how to improve the poor; now, on the contrary, the rich wonder why the poor do not go to the poorhouse, meanwhile seeking in the laws for cures for strikes and socialism, and the poor continually growl at fate and their supposed oppressors. All this is of the quality of spiritual darkness.

Student. — Is it wise to inquire as to the periods when the cycle changes and to speculate on the great astronomical or other changes that herald a turn?

Sage. — It is not. There is an old saying that the gods are jealous about these things, not wishing mortals to know them. We may analyse the age, but it is better not to attempt to fix the hour of a change of cycle. Besides that, you will be unable to settle it, because a cycle does not begin on a day or year clear of any other cycle; they interblend, so that, although the wheel of one period is still turning, the initial point of another has already arrived.

Student. — Are these some of the reasons why Mr. Sinnett was not given certain definite periods of years about which he asked?

Student. — Has the age in which one lives any effect on the student; and what is it?

Sage. — It has effect on everyone, but the student after passing along in his development feels the effect more than the ordinary man. Were it otherwise, the sincere and aspiring students all over the world would advance at once to those heights towards which they strive. It takes a very strong soul to hold hack the age’s heavy hand, and it is all the more difficult because that influence, being a part of the student’s larger life, is not so well understood by him. It operates in the same way as a structural defect in a vessel. All the inner as well as the outer fibre of the man is the result of` the long centuries of earthly lives lived here by his ancestors. These sow seeds of thought and physical tendencies in a way that you cannot comprehend. All those tendencies affect him. Many powers once possessed are hidden so deep as to be unseen, and he struggles against obstacles constructed ages ago. Further yet are the peculiar alterations brought about in the astral world. It, being at once a photographic plate, so to say, and also a reflector, has become the keeper of the mistakes of ages past which it continually reflects upon us from a plane to which most of us are strangers. In that sense therefore, free as we suppose ourselves, we are walking about completely hypnotized by the past, acting blindly under the suggestions thus cast upon us.

Student. — Was that why Jesus said, “Father, forgive them, for they know not what they do”?

Sage. — That was one meaning. In one aspect they acted blindly, impelled by the age, thinking they were right. Regarding these astral alterations, you will remember how in the time of Julian the seers reported that they could see the gods, but they were decaying, some headless, others flaccid, others minus limbs, and all appearing weak. The reverence for these ideals was departing, and their astral pictures had already begun to fade.

Student. — What mitigation is there about this age? Is there nothing at all to relieve the picture?

Sage. — There is one thing peculiar to the present Kali Yuga that may be used by the student. All causes now bring about their effects much more rapidly than in any other or better age. A sincere lover of the race can accomplish more in three incarnations under Kali Yuga’s reign than he could in a much greater number in any other age. Thus by bearing all the manifold troubles of this age and steadily triumphing, the object of his efforts will be more quickly realized, for, while the obstacles seem great, the powers to be invoked can be reached more quickly.

Student. — Even if this is, spiritually considered, a Dark Age, is it not in part redeemed by the increasing triumphs of mind over matter, and by the effects of science in mitigating human ills, such as the causes of disease, disease itself, cruelty, intolerance, bad laws, etc.?

Sage. — Yes, these are mitigations of the darkness in just the same way that a lamp gives some light at night but does not restore daylight. In this age there are great triumphs of science, but they are nearly all directed to effects and do not take away the causes of the evils. Great strides have been made in the arts and in cure of diseases, but in the future, as the flower of our civilization unfolds, new diseases will arise and more strange disorders will be known, springing from causes that lie deep in the minds of men and which can only be eradicated by spiritual living.

Student. — Admitting all you say, are not we, as Theosophists, to welcome every discovery of truth in any field, especially such truth as lessens suffering or enlarges the moral sense?

Sage. — That is our duty. All truths discovered must be parts of the one Absolute Truth, and so much added to the sum of our outer knowledge. There will always be a large number of men who seek for these parts of truth, and others who try to alleviate present human misery. They each do a great and appointed work that no true Theosophist should ignore. And it is also the duty of the latter to make similar efforts when possible, for Theosophy is a dead thing if it is not turned into the life. At the same time, no one of us may be the judge of just how much or how little our brother is doing in that direction. If he does all that he can and knows how to do, he does his whole present duty.

Student. — I fear that a hostile attitude by occult teachers towards the learning and philanthropy of the time may arouse prejudice against Theosophy and occultism, and needlessly impede the spread of truth. May it not be so?

Sage. — The real occult teachers have no hostile attitude towards these things. If some persons, who like Theosophy and try to spread it, take such a position, they do not thereby alter the one assumed by the real teachers who work with all classes of men and use every possible instrument for good. But at the same time we have found that an excess of the technical and special knowledge of the day very often acts to prevent men from apprehending the truth.

Student. — Are there any causes, other than the spread of Theosophy, which may operate to reverse the present drift towards materialism?

Sage. — The spread of the knowledge of the laws of karma and reincarnation and of a belief in the absolute spiritual unity of all beings will alone prevent this drift. The cycle must, however, run its course, and until that is ended all beneficial causes will of necessity act slowly and not to the extent they would in a brighter age. As each student lives a better life and by his example imprints upon the astral light the picture of a higher aspiration acted in the world, he thus aids souls of advanced development to descend from other spheres where the cycles are so dark that they can no longer stay there.

Student. — Accept my thanks for your instruction.

Sage. — May you reach the terrace of enlightenment.