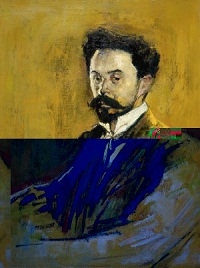 In the widely differing fields of lyric passion, expressed through piano music, and of a profound psychological philosophy, symbolized in myths and mighty music dramas, Chopin and Wagner reigned supreme. It would have seemed fantastic to predict that a composer would shortly appear who would blend these two types of thought; yet, idolizing Chopin, Scriabin followed in his steps until the path led him far beyond the heights reached by the old master, while into this realm of poems in music the Russian genius brought a wealth and profundity of psychological expression and interpretation that has widened the boundaries of musical speech.
As religion permeated the life and work of Bach and Cesar Franck, who remained in constant association with the Church, so the mystical and philosophical temperament of Scriabin led him to the wider inspiration of Theosophy, and to the great conception of interpreting the evolution of the universal soul in terms of music.

The later orchestral works, with their richer resources, stand out as the summits of his achievement, but it is in the piano literature that the full story of the composer’s own development is told, for he had progressed far before the first orchestral piece (Reverie, op. 24) was written, and the five great sonatas and smaller pieces that followed Prometheus, op. 60, show a further advance in thought and style. Op. 1 through op. 76 follow a logical sequence of development, as if the whole were one great epic of aspiration that should have culminated in the Mysterium, his projected synesthetic magnum opus, which he intended to be performed in the foothills of the Himalayas.

Rosa Newmarch, in the Musical Times for June, 1915, gave Scriabin’s own description of the Mysterium as follows: “It was to be a symphony of music, words and gesture, accompanied by secondary symphonies of color and perfume. It would, in fact, be a ritual, but a ritual which set up no barriers between the celebrants and those who were passively initiated.” The death of the composer prevented—or possibly only postponed indefinitely—the completion of this work. This combination of the arts is anticipated by a system of colored lights controlled by a keyboard (Alexander Wallace Rimington’s color-organ) which is included in the orchestral scheme of Prometheus, and was used at the performance in New York, but practical difficulties caused it to be abandoned. It is doubtful if any mechanical device can be found that will anticipate the development of the psychic color sense for purposes of art.

Though Scriabin was prevented by early death from giving all his dreams to the world, his aims and ideals, as well as the results he actually achieved, make him the most interesting of musical pioneers for students of occultism. It is probable that only those who were in intimate association with Scriabin could say how far the wonderful effect of his music is due to his startling, yet logical, technical resources, or to actual occult knowledge, or to the intuition of a sensitive Theosophical artist. Even when heard as absolute music by those ignorant of its mystic-psychological background, its influence is more poignant than that of any other. Those who doubt should listen to the Ninth Sonata, op. 68, called the Black Mass, followed by Prometheus, the Poem of Fire, from which they can learn much. The sonata expresses in universal terms the sensations of every sensitive nature, expressing the power and atmosphere of the invisible worlds and giving an added wonder to those who can glimpse behind the veil.

Throughout his whole musical life, we can trace the one-pointedness of the composer—his intense interest and faith in spiritual evolution, by creative activity surmounting every obstacle, difficulty, and danger. Every effort of the spirit striving for expression through matter is expressed in his works, directions in the score giving the key which our faculties might be unready to grasp unaided, until the ecstatic vision of the last sonata suggests that matter is tran-scended. Never does he lose sight of the first goal, and his aim is always to raise the consciousness of the listeners to a point of ecstasy. With those whose response is sympathetic, he succeeds in a degree peculiar to himself.

Scriabin is neither an impressionist nor an iconoclast; his form is definite, his phrases are clear, even formal, and his harmony is a rational development. This harmonic scheme has been fully analyzed by George Clutsam in the Musical Times of March, July, and August, 1913. It has been suggested that, in some of the latter works, the actual conception was in a scale resembling the tonal system of Busoni, to which only a rough approximation is possible within the tempered scale of the piano of today. Scriabin owed much of his command of delicate craftsmanship to his teacher, the Russian Sergei Ivanovich Taneyev. He wrote no vocal music excepting the choral parts in the first symphony and in Prometheus.

Scriabin, born in Moscow in 1872, was the son of a lawyer and a pianist. Russian children develop early mentally, and at five years of age he could improvise, while at eight years he played easily by ear and composed simple pieces. Like César Cui and Modest Mussorgsky, among other great figures in the history of Russian music, Scriabin intended to enter the army and for six years was a student in the Moscow Army Cadet Corps, but in 1890 he was permitted to leave in order to devote himself to music.

Thanks to the assistance of Mitrofan Belyayev, who published most of the works of Scriabin’s first period and organized concert tours for him, Scriabin was able to spend several years in travel, playing, composing, and reveling in the beauties of nature, which he loved intensely. From 1897 to 1903, he was professor of piano at his old conservatory, but in Moscow there was much opposition to “ultra modernism,” so Scriabin found the atmosphere of Geneva, Paris, and Brussels more congenial. It was in Brussels, where he lived from 1908 to 1910, that he composed Prometheus, the composer’s mystical conception doubtless being deepened by intercourse with a group of Theosophists, artists, and philosophers, of whom Jean Delville, who drew the covers for Prometheus, was a member. There is no doubt that Theosophy strongly appealed to Scriabin immediately, for his own line of thought was already in close sympathy; and after this time, the psychological program of his music became more definitely Theosophical. In 1909 he made a flying visit to Moscow for a concert of the Russian Imperial Music Society, which was a great success, although the periodical Russkoye Slovo (Russian Word) was critical.

It was not until 1914 that Scriabin visited England, where his music, if not always understood, aroused great interest, and he received invitations for twelve concerts which the outbreak of war prevented from taking place. The last concert in which he took part was at Petrograd, April 2, 1915. On his return to Moscow, the boil on his lip, which had troubled him in England, reappeared and developed into a carbuncle. Blood poisoning set in, and the great artist died on April 21, 1915. He received a public musical funeral and was buried at a Russian monastery, memorial concerts being held in many places shortly afterwards.

The words of Rosa Newmarch about Scriabin in the Musical Times of June, 1915, must have expressed the feelings of many mystics and lovers of music: “His loss at the time of this Armageddon [World War 1, 1914-1918] seems to our finite vision cruel and incalculable; for, with his sense of supernatural joy, his strangely beautiful language of ecstasy, and his aspiration to pierce the frontiers of this world, he was perhaps the best fitted among contemporary composers to celebrate the millennium which lies beyond the present strife.” To us those words must seem an unconscious prophecy. May it not be long before his gentle, lovable spirit of harmony and aspiration is again incarnate among us to give the music of that golden age which, though elusive as the rainbow, is surely drawing near. Scriabin’s works include three symphonies for orchestra: Reverie, Le Poeme de l’Extase, and Prometheus, and ten piano works, including sonatas, preludes, poems, waltzes, and mazurkas.

We have 412 guests and no members online