Along with Madame Helena Petrovna Blavatsky, Henry Steel Olcott founded the Theosophical Society, which now has branches worldwide. The Society is dedicated to universal brotherhood and to promoting a comparative study of religion, philosophy, and science. Olcott was passionate about those aims, and he worked tirelessly to get Asian texts translated and published in English. He especially focused on Hindu, Buddhist, and Zoroastrian texts. He founded a library at our international headquarters in Chennai, India. That library is still used today for research by Asian scholars.

Colonel Olcott founded Ananda College in Sri Lanka in the late 1800s. One of my mentors in the Theosophical Society, Fritz Kunz, was principal of that college from 1914 to 1917. Fritz had been traveling in Asia with C. W. Leadbeater, a prominent Theosophist, and when they arrived in Colombo, Colonel Olcott greeted them at the railway station.

In addition to being the President-Founder of the Theosophical Society, Olcott was a lawyer and a newspaper reporter. He was also deeply interested in agriculture and wrote a book on sorghum that is still used today in some universities.

In the United States, the Colonel’s integrity was well known among his peers. In fact, when President Lincoln was assassinated, Olcott along with two other men were appointed to investigate the assassination.

Olcott fought against slavery and he fought for women’s rights.  He also advocated cremation, something that had never been done publicly in America. When Olcott officiated at the first cremation funeral in New York, headlines in the newspapers reported the first “heathen” funeral. Police had to be called to keep order.

In addition to his extensive work for Buddhism, including writing a Buddhist catechism, first published in 1881, and now translated into more than twenty languages, he was an amazing healer. Stephen Prothero’s biography The White Buddhist: The Asian Odyssey of Henry Steel Olcott has an account of the Colonel’s remarkable ability:

“Olcott’s first healing in Asia occurred on August 29, 1882. When a man said to be totally paralyzed in one arm and partially disabled in one leg approached him after a lecture, Olcott recalled his youthful experiments with mesmerism and made a few perfunctory passes over the man’s arm. The next day the man returned with reports of improved health, and Olcott began to treat him systematically. Soon the man could, in Olcott’s words, ‘whirl his bad arm around his head, open and shut his hand, . . . jump with both feet, hop on the paralyzed one, kick equally high against the wall with both, and run freely.’ Equally important, he was also able to sign a public declaration testifying to his miraculous recovery.”

News of the healing spread like wild fire. Soon Olcott was treating hundreds of people a day, so much so that he became exhausted and his teachers asked him to stop the practice.

Olcott’s extraordinary teachers, called Mahatmas or adepts, had high praise for him. They said he would go anywhere, sleep on any bed, eat any food or none, for the cause. One of his teachers wrote: “Him we can trust under all circumstances, and his faithful service is pledged to us come well, come ill.” 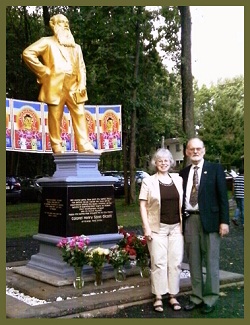 We have 319 guests and no members online