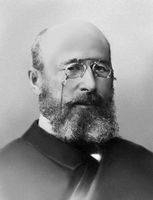 In The Secret Doctrine, H. P. Blavatsky quoted extensively from Butlerov's work in illustrating the infinite divisibility and elasticity of atoms, which if true reduces matter into centers of force. This was the subject that Albert Einstein drew particular attention to when he spoke of the significance of Blavatsky's The Secret Doctrine.
Butlerov wrote:

"See now what a curious contradiction this fundamental principle of the materialists is leading them into. The atom is indivisible, and at the same time we know it to be elastic. An attempt to deprive it of elasticity is unthinkable; it would amount to an absurdity. Absolutely non-elastic atoms could never exhibit a single one of those numerous phenomena that are attributed to their correlations. Without any elasticity, the atoms could not manifest their energy, and the substance of the materialists would remain weeded of every force. Therefore, if the Universe is composed of atoms, then those atoms must be elastic." (SD 1:519)