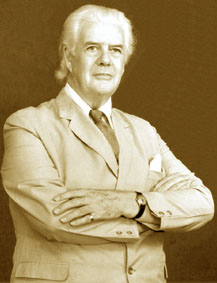 Coats returned to Vienna in 1932 on business and had his first contact with Theosophy through a casual conversation in a cafe. Returning to England in October 1932, he joined the TS on November 2, 1932. He and Betsan married on October 31, 1933, and worked jointly for Theosophy for the rest of their lives. In 1935, they embarked on a world trip and spent six months at Adyar, the headquarters of the TS; the Kalakshetra cultural movement, to which they contributed, was founded at that time.

Coats was associated with TS President George Arundale and his many lecture tours. In 1935, Coats participated in the reformation of the World Federation of Young Theosophists and headed that organization for many years. In 1937-8, Coats, whose family now included two children, worked in the President's office at Adyar. The year 1938 was unhappy for the Coatses, however, because their son Christopher was killed in an accident that year.

On the outbreak of World War II, Coats enlisted in the British Army, but his service was brief because of a motorcycle accident that caused him to be invalided out of the army. In 1941, he was elected General Secretary of the English Section and held that office until 1946. During the war years, the Coats's country home housed as many as fifty persons, some of whom were evacuees from the slums of London and who were looked after by Betsan Coats.

In 1946, the Coatses were invited to do TS work in America and lectured there for some three and a half years, with tours to Canada, Mexico, and Cuba. In 1949, Betsan Coats and the children returned to England, and John Coats lectured in Australia and New Zealand for about a year. The year 1952 saw a reversal of locations, with Betsan Coats lecturing in Australia while John toured the UK and Europe for the TS. They were apart until the following year, when they met in South Africa to continue TS work there, ending at Adyar for the 1952-3 convention.

Coats’s facility with German and French was especially useful in 1953, when he became secretary to J. E. van Dissel, who was in charge of the European Federation, embracing more than twenty countries. Coats also served as president of the European Federation in 1959-68. TS president N. Sri Ram asked Coats to organize the 1966 World Congress in Salzburg, thirty years after the last previous one (because of the intervening war years).

In 1957 Betsan Coats had embarked on a hotel project in Queensland, Australia, to help war refugees settling in their new country. By 1968, the children having grown up and married, there were few ties left in England for the Coatses, so they sold their English house and began a world-wide lecture tour for the TS.

In 1973 John Coats was elected president of the TS, a fitting consummation of his many decades of work for the Society. As president he tried to modernize the administrative procedures at the Adyar headquarters and published The Theosophist magazine in a new format. It fell to his lot to organize the 1975 Centenary celebrations in New York and Adyar, where Betsan supervised the accommodations and welcome for some 3,000 members arriving from many parts of the world. Unfortunately, John Coats was not able to complete his seven year period of office, dying in India on December 26, 1979.

John Coats was known for his gentleness and humanity. His never failing consideration for others and his flawless manners made him one of the most effective ambassadors in the TS. Standing six feet four inches (193 cm.) in height, he was affectionately known as "the gentle giant." Betsan reported that John believed the key to the door of reality lay in a loving selflessness towards all living things and that the utmost courtesy—in thought, feeling, and action—was critically important in any difference of opinion.