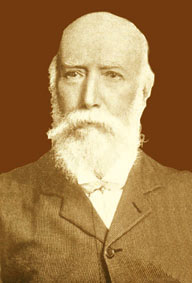 In 1859, Sinnett became assistant subeditor on the staff of the London newspaper The Globe and in 1865 editor of the Hong Kong Daily Press. In 1868, he returned to England, where he became an editorial writer for The Standard. During a short stay in the U.S. on his return trip, he visited the Mormons in Utah and had an interview with Brigham Young. Sinnett married Patience Edensor on April 6, 1870. In 1872, Sinnett became editor of The Pioneer, an Indian English language newspaper, published in Allahabad. The Sinnetts first made personal contact with the Theosophical Society when H. P. Blavatsky and Henry S. Olcott visited them at Allahabad in 1879, and both Sinnetts joined the Society shortly thereafter. As a result of their acquaintance, Sinnett published an account of HPB’s powers in The Occult World (1881), which caused a great stir for its matter-of-fact description of her phenomena.
On October 13, 1880, Sinnett wrote his first letter to the Master Koot Hoomi, followed by a second one two days later. KH replied to the two letters on October 17, and so commenced a correspondence that continued until March 1886. These letters were eventually published in 1923 under the editorship of A. T. Barker (chronological edition by Vicente Hao Chin, 1993). Information in the letters was the basis for Sinnett’s next book, Esoteric Buddhism (1883).

In 1882 Sinnett was terminated as editor of The Pioneer, because of his Indian sympathies and his public espousal of Theosophy. In early 1883, the Sinnetts returned to London, where he joined the London Lodge in 1885 and published a novel entitled Karma. In 1886, Sinnett wrote Incidents in the Life of Madame Blavatsky.

Sinnett was the center of Theosophical activity in England until HPB settled there in 1887. The sometimes stormy relationship between Sinnett and HPB came to a head in 1888 with the publication of The Secret Doctrine. That work contradicted some of the views in his Esoteric Buddhism, a contradiction that Sinnett found unacceptable. When Blavatsky formed the Esoteric Section in 1888, Sinnett refused to join it. But in June 1890 Blavatsky formed a European Section of the Theosophical Society and, in a gesture of reconciliation, appointed Sinnett as one of its advisory council.

Sinnett resigned from the Theosophical Society in March 1909, after Besant succeeded Olcott as international president. Sinnett then formed the Eleusinian Society out of what had previously been the London Lodge. He returned to the Theosophical Society in 1911, however, and Annie Besant invited him to become Vice-President; he accepted and disbanded the Eleusinian Society, forming the London Lodge anew. Shortly before Sinnett died at the age of 81 on June 27, 1921, Besant was instrumental in raising funds to assist him in his declining years, but he did not survive long to enjoy the gift.

Along with Blavatsky, Sinnett was one of the earliest and most influential writers on Theosophy. His books, based mainly on information contained in the Mahatma Letters, were largely responsible for popularizing Theosophy in the English speaking world at the end of the nineteenth century.

We have 605 guests and no members online