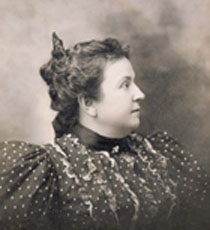 In 1893 or 1894, William Q. Judge called on Tingley at her home. He had been impressed by her efforts for the destitute. She was unsatisfied, she told him; she wanted to get at the root of problems and prevent the degrading situations that imperil too many lives. Judge spoke about reincarnation, karma, and the divine spark within every human being. Tingley was deeply moved and joined the Theosophical Society on October 13, 1894, and, about a fortnight later, the Esoteric Section. She worked closely with Judge, but in March 1896, only eleven months after delegates in convention had declared “entire autonomy” for the American Section and elected him “president for life,” Judge died.

The leadership of the newly independent American Society was in doubt for a time, but Tingley claimed it. Despite her relatively recent entrance into the Society, she was accepted by most of Judge’s followers, with only a few, led by Ernest Temple Hargrove, later forming their own organization in New York City. Tingley sought to shift the independent American Society’s emphasis toward humanitarianism and brotherhood. She announced the founding of a School for the Revival of the Lost Mysteries of Antiquity and plans for a nine-month World Theosophical Crusade.

On June 13, 1896, Tingley and her party sailed for England. At their first public meeting there, they served a “Brotherhood Supper” for more than three hundred of “the very poorest of the poor, each one having been personally invited by the Liverpool Theosophists.” They held public meetings and often brotherhood suppers throughout Britain and Europe. Thence they traveled via Egypt, India, Ceylon, New Zealand, and Australia, to arrive in California on February 13, 1897. Ten days later at Point Loma, Tingley laid the cornerstone of her international school, stating that children would be taught the “laws of physical, moral, and mental health. They will learn to live in harmony with nature. They will become compassionate lovers of all that breathes.”

In New York, the Society’s third annual convention (1897) reported growth in membership and progress in work for prisoners and children. In June, Tingley founded the International Brotherhood League (IBL) to sponsor various benevolent activities, such as homes for unwanted babies, and help for the needy, parolees, and victims of disaster. At the 1898 convention in Chicago, delegates voted to found the Universal Brotherhood organization, with the Theosophical Society in America as its publishing facility and the IBL for practical humanitarian work. Tingley was named Leader and Official Head of all departments, and the organization became known as the Universal Brotherhood and Theosophical Society. (In December 1929, under Gottfried de Purucker, the Society resumed its original name. To distinguish it from the parent Society, it is referred to here as the Theosophical Society, Point Loma or now Pasadena).

On February 13, 1900, Tingley transferred the international headquarters from New York City to the Theosophical community of Lomaland, in Point Loma, California. That year, with five pupils she founded the Raja-Yoga School as a department of the School of Antiquity, followed in 1919 by the Theosophical University. Tingley explained: “The basis of this whole education is the essential divinity of man and the necessity for transmuting everything in his nature which is not divine. To do this, no part can be neglected . . . . The aim of true education is not to acquire a store of facts. . . . True education is the power to live in harmony with our environment and the power to draw out from the recesses of our own nature all the potentialities of character and divine life.” An innovative feature of the Raja Yoga system was the inclusion of music, drama, and the arts as integral parts of the curriculum, starting with three-year-olds. All students played an instrument, sang in the choir, took drawing and painting, and participated in dramatic work, with early exposure to the Greek and Shakespearean dramas per¬formed under Tingley’s personal direction in the open-air Greek Theater she built in 1901.

Tingley’s philanthropies continued until her death. In her schools in California, Cuba, Sweden, and Britain, hundreds of children had their tuition waived. Several contingents of children (many Spanish-American War orphans) were educated gratis at Point Loma, as also in Cuba at three Raja-Yoga academies run by Theosophical volunteers. But the steady drain of the Cuban work on Point Loma’s finances, coupled with health problems of several teachers, forced her eventually to close the Cuban academies.

Work among prisoners was a lifelong concern of Katherine Tingley’s; she fought against capital punishment and for humane treatment of inmates, with re-education and rehabilitation. The New Way (1911-1929), given free to prisoners, explained karma, reincarnation, and our inner divinity in simple, appealing language. Tingley and her staff made regular visits to prisons, sometimes bringing the Raja-Yoga musicians. A lover of animals, she battled also against vivisection.

Alongside her educational and humanitarian achievements must be placed Tingley’s labors for world peace. While acknowledging the constructive efforts of The Hague peace conferences, she believed that the prevailing notion of periodic wars as inevitable was morally twisted. To counter the growing fears in Europe of imminent war, in 1899 Tingley called three Universal Brotherhood Congresses: at Point Loma, Stockholm (a reception attended by King Oscar II), and Brighton, England. Her endeavors culminated in her March 3, 1913, foundation of the Parliament of Peace and Universal Brotherhood. She announced an International Theosophical Peace Congress at Visingsö, Sweden, which was held June 22-29, attended by some 2,000 European Theosophists and admirers of Tingley’s humanitarian work. Twenty-four Raja Yoga College students had accompanied her, and on August 20 they sang at the twentieth World Peace Congress in The Hague, Netherlands.

When World War I started in August 1914, Tingley immediately urged the membership in Germany and other European countries to be “international in spirit . . . . Those attacking and those attacked need our compassionate consideration.” On August 26, as president of the Parliament of Peace and Universal Brotherhood, she called for a “Sacred Peace Day for the Nations” to be observed in San Diego on September 28, 1914. On September 3, she telegraphed an appeal to President Woodrow Wilson to select a day for all people of every religion and race “to meet together on the level of their common humanity . . . and as a loving tribute to the cause of Universal Peace.” She enlisted the support not only of the mayor and city council of San Diego, but also of governors and mayors throughout the land. The Marine Corps from Camp Pendleton led the Peace Day parade.

Throughout the 1920s, Tingley continued her educational and philanthropic activities as part of other Theosophical work. Throughout the US and Europe, Tingley’s theme was “There is no failure, all is tuition.” Since every being is divine in essence, no power in heaven or earth can defeat the indomitable human spirit. She died on July 11, 1929, while on a European lecture tour.

Katherine Tingley’s books include Theosophy: The Path of the Mystic, The Gods Await, The Wine of Life, and the compilation The Wisdom of the Heart.
[This article is a revision of one originally written by Grace F. Knoche, to shorten it somewhat and provide some additional details.]