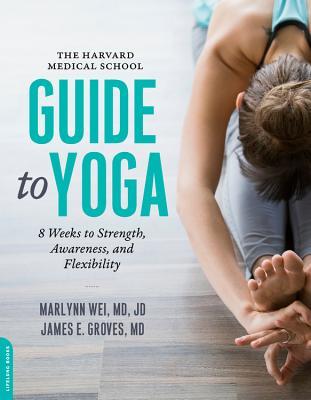 This is an outstanding book on yoga and the approach toward mental and physical health gives it universal appeal. I own and have read a large number of yoga books. Both, Drs. Wei and Groves, have managed to combine the best into one book, and I’m strongly suggesting that this book should be on your bookshelf. If you’re just starting out in a yoga class, or a home practice, this book is all you need. If you are a long-time practitioner, this will become your reference manual. It covers the whole yoga spectrum and is very readable.

As I write this review, I am 76 years. I have been a student of yoga for about twenty years. The eight limbs of yoga is where I started. It was I. K. Taimni’s book: The Science of Yoga (The Yoga sutras of Patanjali) that was my introduction. I have become focused on the first two limbs (Yama and Niyama) with the third limb (Asana or poses) representing what most people think of today when yoga is mentioned. This historical framework is explained quite clearly in the early part of the book.

I practice the poses (asanas) for the mental and physical benefits they bring. Because both authors are medical doctors, they have stated many of the benefits of yoga in the beginning. At the risk of overloading you with benefits, let me list only a few. Yoga: builds strength, balance, flexibility, allows you to pursue a healthier lifestyle, improves your sleep and immune system, is adaptable to help with medical conditions, relieves stress, helps with anxiety, and the list goes on. There is a follow-up in another chapter on ‘The Modern Science of Yoga’. In the Notes section at the end of the book, a large number of references are given to support these claims.

I personally can attest to the modern claim of yoga when I was diagnosed with Atrial Fibrillation (Afib) about four years ago. I found that I could bring my irregular heart beat back to normal by using a yoga breathing technique I had learned in yoga class. The cardiology nurse said she had never seen anyone do that before. It was through this anecdotal story and an article in Psychology Today that Dr. Wei and I made a connection.

Part II starts with the fundamentals. The suggestions are clear and concise. A very important chapter is on preventing yoga injuries. Moving into Part III, we begin to build a yoga practice. This is followed by a plethora of poses; including bandhas and mudras. Finally, we bring this together with another of the eight limbs – Meditation. This is a short chapter, but even a long-time meditator will find something new here.

The illustrations and tables are very well done. Rather than photos of poses, an artist has sketched the pose with commentary as to correct alignment. I found this extremely helpful. Likewise, the tables are clear and easy to follow.

In the closing chapter, we put it all together for an eight-week yoga program that you can do at home. This is where I differ from the authors in that I go to a teacher, lead class 5 days a week (1 hr. plus) and do a light home practice (15 minutes) the other 2 days. This is my routine and you will find you own.

Another valuable section is at the end dealing with specific health conditions. Again, I remind you that two M.D.’s wrote this yoga book and their suggestions are very specific and are to be taken seriously.

Actually, the whole book should be taken seriously for both your health and spiritual growth. I am not familiar with Dr. Groves, but his story is told early in the book. On the other hand, I have communicated with Dr. Wei and know her story better. If you look this book up on Amazon it states: Marlynn Wei, MD, JD, is a board-certified psychiatrist, certified yoga teacher, and writer. She began practicing yoga in 2008 during her residency training at Harvard Medical School and completed her 200-hour Yoga Alliance teacher certification. Dr. Wei integrates principles of yoga into her work with clients with anxiety and depression, using a holistic approach of psychotherapy, meditation, yoga, and mindfulness. I know that she also volunteers her time with an organization from New York City that teaches yoga – ‘Exhale to Inhale’ http://exhaletoinhale.org/ Exhale to Inhale strives to empower women who have experienced intimate partner violence and sexual assault, heal and reclaim their lives. Exhale to Inhale provides weekly yoga classes at domestic violence shelters and community centers. 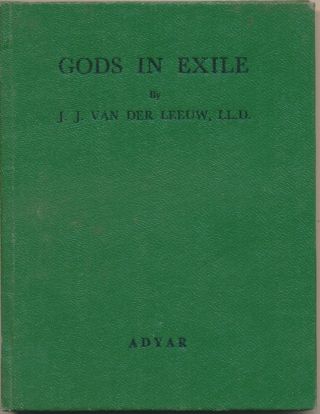 I have in my bookcase a number of Theosophical books that are small; many of which have red, blue, and green covers. Most of them also have ‘Adyar’ on the lower front cover and they look as if they are a set or a series designed to be quick reads. Many are by Annie Besant, which are of her lectures and talks, and HPB. However, I have a favorite that does not seem to be as well-known, and it is this book under review: Gods in Exile by the Dutch born author, J. J. van de Leeuw.

How I came about buying this book is a story that has Theosophical value. I became a card carrying member of the TS just after Dora Kunz became the president of the TS in America, which would have been around 1975. Dora had sent out a query to as many scientists as she could find associated with the Society in her attempt to form a science group. This group eventually became the TRI (Theosophical Research Institute). Having a PhD in chemistry, I answered her call, and I found myself invited to meet with her at the American Headquarters at Olcott in Wheaton, Il. Living only an hour away, I found myself travelling over frequently as our group developed.

One of Dora’s quests was to bring back science into the Theosophical fold as she remembered from the past. Some of this influence was from her late husband, Fritz, but as I discovered, another source was from Dr. J. J. van der Leeuw.

This came about when Dora and I were discussing where not only the hard sciences fit in, but the important area of a softer science: psychology. That was when she suggested that I read this book that is currently under review. According to Kirsten van Gelder Kunz`s biography on Dora, Koos, as J.J. van der Leeuw was often referred to, and Dora knew each other when they were studying under the guidance of C. W. Leadbeater. Kirsten also speculates that Koos had a likely ‘influence’ on Dora.

It should also be noted that van der Leeuw in 1933 was a regular visitor of Sigmund Freud. It seems to me that one can see the influence of Freud, especially the vocabulary, in van der Leeuw’s book under review; especially when he uses the word ‘Ego’. Here, I think ‘Higher Self’ is better. However, Dora preferred ‘Inner Self’ to avoid any directional aspect.

I use this book as a devout Catholic would in practicing the art of Lectio Divina. In essence, I read a short passage and then meditate on what I read. This can be practiced at any location and when you feel the need. The book is small enough that it is handy and very portable.

I’m sure that Dora would approve of my reading it in this manner.