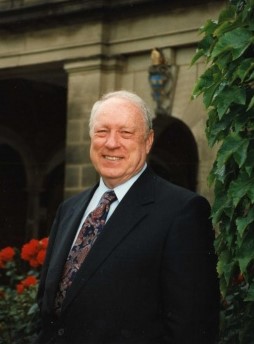 JOHN THOMAS ALGEO passed away on Sunday October 13. He was truly a Theosophical giant, a gifted speaker, a formidable teacher and an excellent author. Although he had a strong personality and was always outspoken, I actually came to know him as a rather shy, sincere and humble man with a profound knowledge of the teachings, always defending what he believed in. His greatest capacity of all capacities was the gift of admitting a mistake! His dear wife Adele, throughout their marriage, was his beacon, and it was touching to see how much he cared for her and looked after her after she had fallen seriously ill. We know that a difficult phase started for John after Adele had left our plane in 2010, but it was clear that also on his own, in the autumn of his life, he tried hard to make the best of things, ever active and always on the vanguard. John told me more than once  that he enjoyed working with me on Theosophy Forward, because, as he  jokingly said: "it keeps me from the streets." Occasionally when we were in touch and Adele's name came up he would say: “Yes, I do miss her, but I often talk with her in my dreams.” As editor-in-chief of Theosophy Forward I owe John a lot and I have learned much from him over the years. Our collaboration started in 2008 and lasted until; 2016; eight rich years.

Why do we honor John? What is it that moves us to give credit and show admiration, while he is no longer on our plane? Each one of us might have a particular reason to do so, or not, but it is axiomatic that if we want to know who and where we are, we need to know where we’re from. Only thus will it be clear to us which direction our future lies. John, but also others who left us their legacies such as their thoughts, music, paintings, sculptures or any other art form, like poetry and literature, help remind us who we are. With that awareness we are able to move forward. It is about what John left behind and it is our privilege to benefit and be inspired by valuing that unique heritage.

Ever since its inception Theosophy Forward published countless articles written by John. The complete series of his Commentaries on The Voice of the Silence appeared in 20 chapters, but also the series entitled  The Ancient Wisdom of Harry Potter, and the one on L. Frank Baum found their way to the readers of this e-Magazine. At the time wonderful e-Books of several works by John were produced by Anton Rozman from Slovenia, which still can be viewed in PDF format.

In this special Newsletter you will find links to some of John's books, articles and series which Theosophy Forward (i.e. TF) had the honor of publishing.

Frank Baum and Theosophy - part one

The Principle, Not The Person

Obviously there is much more, but this Newsletter would become far too long if all titles were to be mentioned here. If you are interested in reading more of John's works, type his name or a title in TF`s  search bar and you will be directed to his oeuvre available on Theosophy Forward.