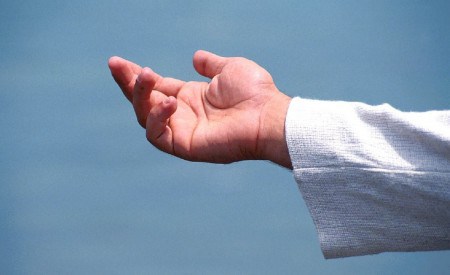 Wishing to encourage her young son’s progress on the piano, a mother took the small boy to a concert of the famous pianist, Paderewski. After they were seated, the mother spotted a friend in the audience and walked down the aisle to greet her. Seizing the opportunity to explore the wonders of the concert hall, the little boy rose and eventually explored his way through a door marked “No Admittance.”

When the house lights dimmed and the concert was about to begin, the mother returned to her seat and discovered that her son was missing. Suddenly, the curtains parted and the spotlights focused on the impressive Steinway piano on stage.

In horror, the mother saw her little boy sitting at the keyboard. Innocently, he then began to play "Chopsticks".  The crowd reacted with anger, some shouts were heard, "Take the boy away!", "Who is bringing a little boy to a concert?!".

When Paderewski heard the uproar backstage, he grabbed his coat and rushed to the stage. Realizing what was going on, he went to the piano, Reaching around the little boy from behind, the master began to improvise a countermelody to “chopsticks.” As the two of them played together, Paderewski kept whispering in the boy's ear, “Keep going. Don't quit, son... don't stop... don't stop.”

Together, the old master and the little boy transformed an embarrassing situation into a wonderfully creative experience. The audience was mesmerized.