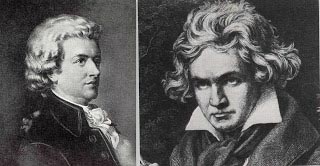 Beethoven arrived in Vienna in the spring of 1787 as a youth of great promise and was taken to play before Mozart. Assuming that his music was a showpiece specially prepared for the occasion, Mozart responded coolly. Beethoven begged him to state a theme on which he could improvise and began playing as if inspired by the Master’s presence, Mozart became engrossed. Finally he rejoined his friends in the next room and pronounced emphatically, “Keep your eyes on that young man. Some day he will give the world something to talk about.”