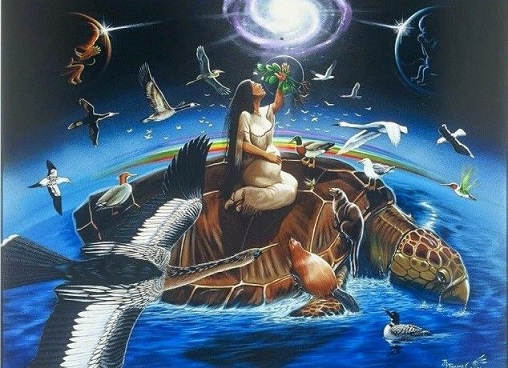 This past summer, I was (again) introduced to the book Braiding Sweetgrass by Robin Wall Kimmerer. The book was gifted to me in a roundabout fashion after many people mentioned that I needed to read it. (If we only realized the ways in which the universe speaks to us!) Dr. Kimmerer starts her book with a North American creation story about Skywoman. “In the beginning was Skyworld. . .” Skywoman descends from Skyworld to help create Turtle Island or what we now call North America. The story is so rich in symbolism. For Skywoman to fulfill what she needs to do, she requires mud to plant the seeds she brings. Many water creatures try to swim to the bottom of the sea without success. It is the muskrat, small, unseen, and in today’s mainstream thinking inconsequential, who dives to the bottom and whose lifeless body surfaces, clutching the mud in his little hand. Turtle offers his back as the solidity needed for the mud to plant the seeds and Skywoman sings a thanksgiving song. As she dances, she plants her seeds with every step. I haven’t done justice to this story. But what stays with me again and again is the beauty, generosity, gratitude, harmony, and abundance of the story. Nothing is without purpose, no one is inconsequential. And nothing is done for oneself. Every action is done for the evolution of the Creator and for all the beings that come after. Great Spirit is in every thing. Even the mud. (And that folks, is Theosophy in Native American form!)

Creation stories can play a major role in how we view the world around us as well as ourselves. Several creation stories of the indigenous in the US often talk about a woman who comes with a gift or a lesson to teach the people of that tradition. In turn, women in many indigenous populations hold a special status in their community. Granted, it does not always seem like it to outsiders, but among their own people it is understood that men and women each have their own roles to play in the community. Yet, because of their ability to give life it is believed that women have a stronger connection to the earth and all that surrounds them. The “woman’s way of knowing” is not something taken for granted or jested. It is believed that during a woman’s moon time (her menstrual cycle), her intuitive abilities are more powerful. A woman’s blood is like the water of Mother Earth. Therefore, a woman’s dreams, visions, or anything she hears or feels during this time is important and requires attention. Sometimes messages or visions are for the people and sometimes they are for one’s own growth. Either way, such things are respected and listened to as it is understood that because of her connection, Great Spirit speaks through her.

As in the creation story, one of the beautiful things about the indigenous is that song is a form of prayer. Skywoman sings and dances as she plants the seeds to create the earth needed to grow food and give life to other beings. Her feet bless the land. In the Pottawatomie tradition, there is an Anishanabe song called the “first woman song” or “Okemah We” that is sung to honor the women in sweatlodge and other types of ceremony. For Native Americans, life is ceremony. It is the Great Breath and we are all part of it no matter where we come from. But the first woman song talks about the woman who is “Okemah” or “higher up” because she holds great wisdom. “Higher up” does not signify importance or position as it is often thought of in the Eurocentric way, but more of something sacred and full of depth. The teaching, as I understand it, is to see beyond the form of the woman and to connect with the wisdom. “We” (pronounced “way”) in Anishnabe means to “pay attention.” Stepping back from the literal words, we must pay attention to see the wisdom in everyone and everything. Often our greatest teachers are the ones we don’t see because they draw very little attention to themselves.

I often wonder what life would be like if we were all raised on such creation stories or teachings that centered on respect, selflessness, generosity, connection and so on. Many alternative schools are teaching these qualities in every aspect of a child’s education and the outcomes have proven that while academics are important, the character building of a child is even more important and aids the child in their academics. Children from such schools tend to be more mature in their decision making, express a positivity when facing difficult social situations, and have an all-round better outlook about who they are. I am sure there are many of us who would love to relive our childhood just to attend a Montessori, Walfdorf, or Theosophical school.

One question creation stories bring to mind is: What is the story that we, as individuals, personally carry about who we are? Many of us, women and men alike, are often handed a story from our parents or from what society teaches us. We rarely question the outline of our life. We tend to just fill it in the best we can and get on with what we think is life. But what we think our life is and what it actually is requires deep reflection.

We all have come across people who continue to complain about the same thing over and over again. Or perhaps we ourselves fill stuck in situation that never seems to change. The difficulty for many isn’t not knowing what the problem is, the difficulty is knowing what the problem is, but being fearful of stepping out of the story. Many people feel a great comfort in their story and create an identity for themselves based on their story: the abused child, the victim of a bad marriage, and so on. This is not to say that there is not validity in the person’s experience, but when we define who we are based on an experience and create a story around it, we limit ourselves from our true potential. If we stick to the story, we never move forward.

One of the ways to understand the story you carry with you is by writing it. The important part of this exercise is not to change what you are writing. Just start writing and see what happens. What you write does not need to be shown to anyone so there is no need to feel embarrassed or fearful. Just write. If you don’t know how to start, begin by writing about a childhood experience or about someone in your family. The goal is to allow yourself to explore and to not be afraid to do it. Once you are finished, read it and see what calls your attention and examine it. This exercise can be done in many forms. I know a woman who does not consider herself a painter, but uses paint as the medium to connect with herself based on the colors she uses, the designs she draws and so on. The important thing is to be open to what may or may not surface.

While creation stories have an impact on our life, the reality is they are stories and the endings or stories themselves can always be changed. One of the beautiful themes of the Skywoman story is the constant renewal in perspective. Skywoman leaves her domain of the sky, but doesn’t lose her expansive, giving abilities. Muskrat is shown as significant and strong and despite his sacrifice, the act is joyous and full of gratitude. There is positivity through the story. The renewal in perspective is key to our own lives, leaving one to ask: What is needed in my own story?