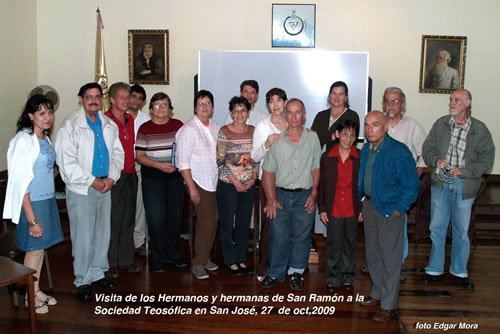 Seven new members joined The Theosophical Society on February 5 this year. They are part of a study group that has been meeting for about one and a half years in the city of San Ramón, under the leadership of Bro. Carlos Orlich. San Ramón is located at about 74 Km (46 miles) from San José, which is the capital of Costa Rica. Many years ago, in the mid-twentieth century, a Theosophical Lodge called "Star of the East" functioned in that city, but for several reasons, it had ceased to function.

The new members at San Ramón have requested authorization to form a new Lodge under the same name. This request is now being processed at the international headquarters, and we hope that very soon we will have a new nucleus of the Theosophical Society, taking part in its mission of shedding more light upon humanity.

For the Good News from Krotona, click under More Articles - S. T. Adelante