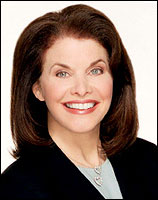 In 1980, Sherry Lansing became the first woman in history to run a major studio (20th Century Fox). Later, as Chairwoman of Paramount Pictures, Lansing encouraged employees to volunteer at Edwards Air Force Base. Their mission? To assist the Pentagon - by gardening and painting "nose art" on military aircraft.