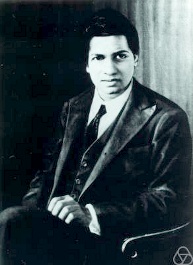 I remember once going to see him when he was lying ill at Putney," the mathematician G. H. Hardy once remarked. "I had ridden in taxicab number 1729, and remarked that the number seemed to me rather a dull one, and that I hoped it was not an unfavorable omen. "'No,' he replied, 'it is a very interesting number; it is the smallest number expressible as the sum of two cubes in two different ways.'"