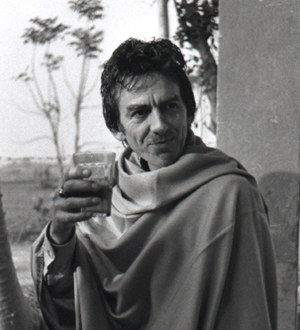 In 1966, George Harrison (the quiet, spiritual Beatle) began to study the teachings of A. C. Bhaktivedanta Swami Prabhupada, the founder of the International Society for Krishna Consciousness. One day, the "quiet one" drove from France to Portugal chanting "Hare Krishna, Hare Krishna" for 23 consecutive hours - and claimed to have been transcendentally guided to his destination after foregoing the use of road directions.

Some time later, Harrison found himself passing through a nasty storm aboard a turbulent flight. He promptly pressed his feet into the seat before him and started shouting, "Hare Krishna! Hare Krishna!"

"I know for me," Harrison declared after the plane touched down, "the difference between making it and not making it was chanting the mantra."