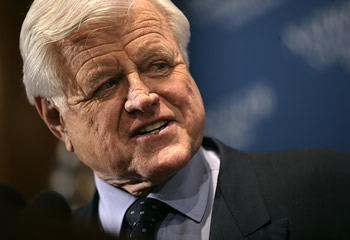 Joseph Califano, the former Secretary of Health, Education, and Welfare, tells a story about Ted Kennedy’s sense of humor: “In the Carter Administration, Senator Kennedy was proposing a nationalization of health insurance. We were proposing a lesser bill that would simply mandate employer coverage and when I announced our bill to the Administration, and then the next day Kennedy announced his, and I went on television…and said ‘Senator Kennedy’s bill has about as much chance of passing as putting an elephant through a keyhole.’ The next morning when I arrived in my office, there was a huge board with a keyhole cut in the middle of it and a baby stuffed elephant hanging from a string, swinging back and forth, and a note on the top: ‘Joe-it looks like it fits.’