The Relationship between Humor and Zen 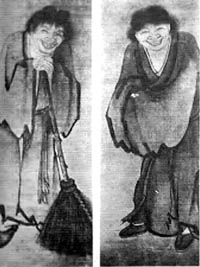 One of the main functions of humor in Zen is in trying to allow one to understand the absurdity in attempting to classify reality into categories. Thus, the boundaries formed between logical issues are broken down, revealing the frustration that Zen has with logic and reasoning.

We see here a serious message wrapped up in a humorous package. The absurdity of classifying things into little boxes is revealed here: Truth is and is not like a river; it transcends classification.

We have 548 guests and no members online