Thoughts on Music and Vedanta 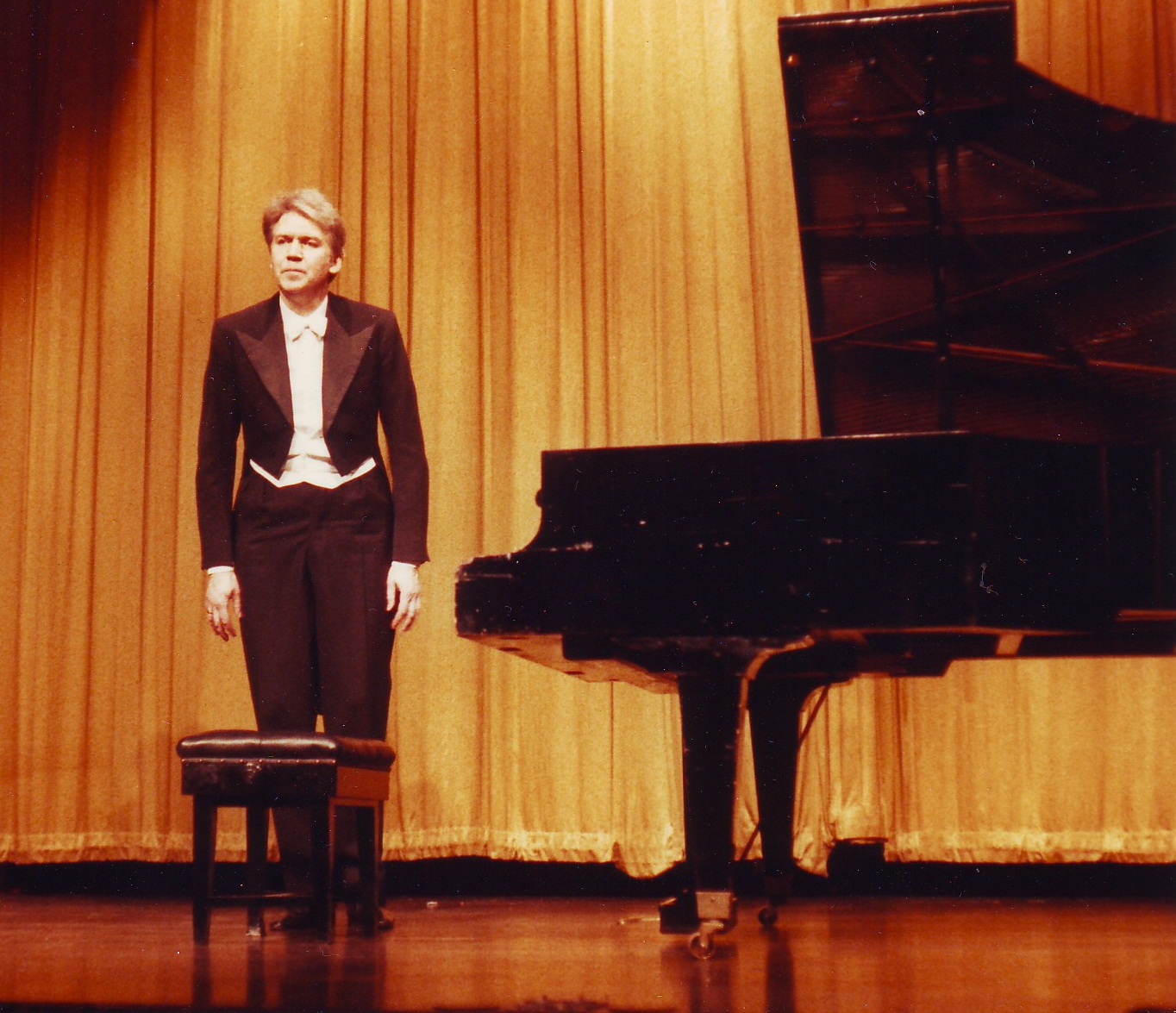 The author as concert pianist

During my career as a pianist, both as a teacher and a performer, I have often noticed how much music has in common with Vedanta philosophy. Those who have pursued one branch of art or another for some time soon notice how many things are similar to other branches – only the outer form of expression is different. Whether or not we find such correspondences, there is no doubt that finding them can deepen our understanding of our particular art and open our eyes to various important things that would otherwise have been hidden from us.

The Vedanta philosophy is defined as Monism or rather Non-Dualism (Advaita): “Truth is one – sages call it by various names”.  The whole of reality is one unified wholeness, multiplicity is our illusory perception of it, “Maya”. The rope is taken to be a snake. This reminds one undeniably of musicians at different levels, from the perceptions of the beginner to those of the mature master in music.  The beginner is involved in countless things, both theoretically and practically. The beginner takes the rope for a snake.  Besides all the large and small factors that form a whole movement of a sonata or a symphony, a close relationship also exists between the themes of all the movements in the case of a mature master composer, as if they had their origin in one single idea.  It is e.g. a widely held opinion that Mozart had some access to deeper layers of consciousness. He seemed to have been able to “see” a whole movement of a sonata or a symphony as if in an instant. Without the work taking its normal time, like “looking at a sculpture in sound”. This sense of unity is also to be found in the renderings of great performing artists.

Another similarity between music and Vedanta can be found in the various “schools of technique” and teachings. The various “schools” of piano playing, for instance, in the 19th century and at the beginning of the last one, were identified with some famous pianist, a method, the name of a city or a country, the French or the Russian School etc. Then in the second and third decades of the 20th century a scientific approach was beginning to emerge, i.e. the idea that some truth is to be found in all the various schools and that they all lead to the goal just as the various paths of Yoga, Karma, Jnana, Bhakti or Raja lead to the same goal.  But whether in Yoga or in the art of piano playing, narrow-mindedness has now been superseded by this kind of broadmindedness and common sense, in which the best of the various methods are selected and used.

We can also see practical correspondences in the eight steps of Patanjali’s Raja Yoga and the steps in the training of the pianist. Yama and Niyama could be the pianist’s truthfulness to his art; Asana the practical posture at the instrument; Pranayama a natural way of breathing and directing the life-force; Pratyahara, turning the mind and senses inwards; Dharana, concentration on the piece at hand; Dhyana, keeping the concentration steady on the piece; and Samadhi, becoming one with the music.  On rare occasions the pianist may become so united with the piece of music he is interpreting that he loses all sense of time and place and even reaches a higher state of consciousness.

In Yoga the aspirant has to go through various practices in concentration and meditation, practising the repetition of various mantras (japa) or visualizing the Chakras, to being aware of the breath, sensations, sounds etc. All this reminds one of the practices adopted by pianists. In the beginning the pianist learns small pieces by heart, then gradually longer and more difficult ones, until he can attempt larger forms like sonatas and other large- scale works. During this process he has to overcome technical difficulties, rhythmic problems, articulation, to form the notes into phrases, gain control over dynamics, mould melodic lines in an artistic way, control the tempo, accelerate or slow down or keep it steady, build up the work as a whole, its structure, respect its style, what period it belongs to and finally to give it life, so that when it is performed for an audience it will be convincing and the “artistic image” the pianist has conceived will “get through” to the listener. All this is mentioned here to show how many things have to be taken into account in order to bring all these parts into a convincing unity of interpretation.

When small parts are practised over and over again it is not very far from the phrases or images repeated in meditation. It undeniably reminds us of Ramanuja’s definition of meditation (Dhyana) namely like “pouring oil from one vessel into another”. This is of great interest to the musician who knows that Mozart said that when music sounds at its best “it flows like oil”.

In all the training and instruction that is involved in the art of piano-playing, the guidance of a teacher is most important. Without a good teacher there is the danger that the student will lack a sense of self-criticism and think he is actually more advanced than he is and on the other hand he may make things unnecessarily difficult for himself because of the lack of practical guidance. Not all knowledge is gained from books. This applies just as much to the student of Yoga-Vedanta, in which a spiritual guide can help the student solve various problems which cannot be solved from books. Here we come to a point which must be emphasized most strongly.  There are teachers both in music and in spiritual training who make the student into a kind of replica of themselves. Genuine spiritual teachers point out the way and the student learns. In a similar manner the student of the piano learns, but the criticism his teachers provide support him, encourages him and prevents sloppy workmanship.

After the first stages in spiritual development, psychic powers may awaken in the student. All the great spiritual teachers warn against their abuse, as it is not only that they have bad consequences but they often strengthen and enlarge the personal ego, contrary to the aim of spiritual training. In the case of the pianist, a comparable thing could be the technical ability the student sometimes acquires at a certain stage. Then it is very tempting for him to “show off” this acquired “power” by technical wizardry and cheap tricks that have nothing to do with true art, but look and sound like real magic to naïve listeners. 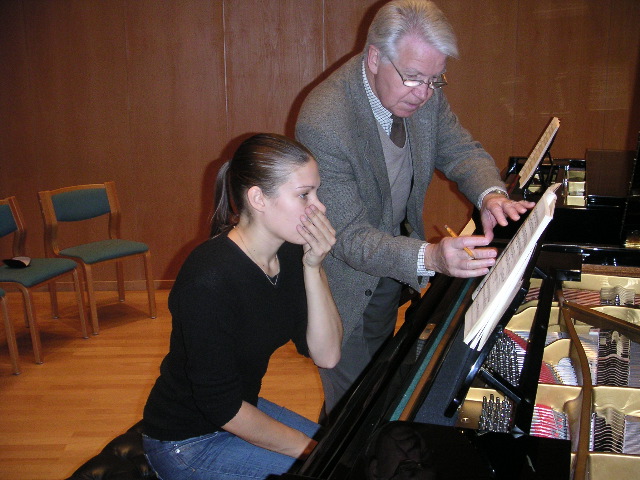 When the piano student has reached a certain stage he can start performing for an audience with considerable accuracy and assurance, and when he is even more established he can appear in public. It is a tremendous effort for a student to face an audience in a public recital for the first time. There are so many things that can go wrong. Then it is a question of having courage or losing it. It is a matter of “do or die”. This moment has always reminded me of the scene at the beginning of the Bhagavad Gita, in which two armies are face to face, ready for battle. In front of them Arjuna, the hero, is sitting in his chariot. This comparison is very fitting if we have a piano concerto in mind.  The pianist is sitting at his concert grand piano in the centre of the stage with the symphony orchestra on his left and the audience on his right. When facing this situation Arjuna is about to lose courage, but Krishna, his charioteer, tries to encourage him. He tells him that he is a warrior and that it is his duty to fight. This is not fitting only in the case of the pianist, but also in the case of the spiritual aspirant who faces his internal enemies in his meditation.

It is only natural in human nature that students of music and Vedanta are often impatient to get to the top as soon as possible. All those teaching music know that it is impossible to go to the next stage before you have mastered the level you are now on. Two things  seem to take the longest time to realise: to know how to really LISTEN and to RELAX. So many just want to go fast and try to pass by the vital points, and so they in fact take longer, because they are always trying to avoid the real issue. Do we not sometimes seek some mysterious methods in order to get quick results? There is also another viewpoint for the impatient aspirants: Somebody once said that “it is not the goal that is vital to one’s existence, but the quality of the journey! Why should we not relax and enjoy the view and listen with alert attention and have courage to face the journey and everything that happens on it? Bon voyage!