Youth can di it 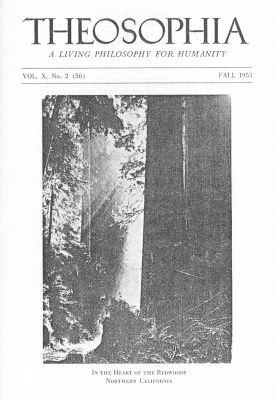 [Original over photo: In the heart of the Redwoods, Northern California.]

Universal Life, in all its multimyriad forms and aspects, is in constant flux. Unalterable in its underlying essence, it is in perpetual outward change. As soon as any one of its temporary manifestations becomes rigid, decay sets in, which is but another aspect of Life, breaking up the outworn form, in order to build a new and more adequate one.

Wherever there is flexibility, optimism, dynamic interest, vision, the search for the Unknown, the urge to grow and to become, the enthusiasm which scales new heights and attempts the seemingly impossible - there is youth and hope and the broad highway 'o all future yet unborn.

Wherever there is rigidity, pessimism, indifference, fear of the Unknown, frustration and mental fatigue, doubt, anxiety and lack of vision, attachment to established routines and well-worn grooves of thought, crystallization of methods, and cherished traditions obscuring the distant horizons of the future - there is old age, decay, senility, and the loss of the vital fires which are essential to all becoming and all growth.

It is so with the Theosophical Movement as well. Its essential Life must constantly rebuild its temporary forms, brush aside useless traditions, revitalize its manifold channels, keep flexible its vehicles and molds, seek out new ways of manifestation, untried methods of growth, unplumbed depths of experience, and reach out constantly towards greater and broader horizons where are marshalled in letters of fire the noblest hopes and dreams of the human race. Unless these conditions are fulfilled, at least in part, the Theosophical Movement in its present form will have to yield to other currents, other movements of consciousness, emanating from the same ageless source of all Life on this planet, the fountain of its perennial youth, whence issue the life-giving streams of the Spirit nourishing the spiritual organism of Humanity.

In the work we are engaged in the world over, we need the help of those who are young - young in body as well as in heart and mind. Without them, the Movement becomes moribund, set, sectarian and crystallized. With them, it keeps its resiliency, its flexibility, its required momentum of thought and emotion. Let us never forget that when the present-day Theosophical Society was launched by the original Founders, H.P. Blavatsky was 44, Col. Henry Steel Olcott was 43, and William Quan Judge was a mere 24 years of age!

The younger generation of the present day is vitally interested in the developments of Science. The latter, in many of its departments, moves with every day closer and closer to the viewpoint of the Ancient Wisdom. Everywhere bridges are built between the two. Young people interested in Science and having leanings toward a more spiritual outlook on life are a bridge in themselves. But their minds cannot be attracted to Theosophy unless they realize that the Ancient Wisdom teachings are strictly scientific and explain those domains of natural fact which Science has failed as yet to [4] explore. The young generation will not investigate the principles and precepts of Theosophy if it finds them to be church-like, sanctimonious or hopelessly abstruse, bearing no vital relation to the surrounding facts of existence. Therefore Theosophy should be made practical, dynamic, scientific in presentation, ethically sound, simple in wording but profound in implications, usable yet idealistic, applicable to the daily problems of a very complex era, yet with objectives and goals far reaching and distant, suggesting endless fields of growth and research.

The world-era now in formation is being built by the youth of the day. The older generation has had its chance and, very obviously, has almost wrecked its own historical era. The example to behold is not very encouraging, and the lessons learned are mainly negative ones: how not to do things, and how not to behave. It is high time that the youth of the day should be given a greater chance and a more important part in the world-drama! They have untried ideas in their minds, and untapped resources in their hearts. To be sure, they are neither saints nor exemplars nor paragons of virtue, and frankly, would we need such at all? They are eager to experiment and to venture; they are not afraid to make mistakes and to learn thereby. And a genius, according to Leibnitz, is a man who is not afraid of making a mistake, and, curiously enough, makes fewer than those whose potential actions are shackled by the ever-present fear of possible consequences. The latter end in the grave of cynicism and ice-cold frustration, choked by their own fears and buried under the ashes of their own decay. The former, young in spirit and fearless, eventually bring to birth the hidden potentialities of a nobler era, with brighter flames upon the altars and warmer winds upon the restless deeps of the Ocean of Life.

[The wditor wishes to thank Anton Rozman in Slovenia]