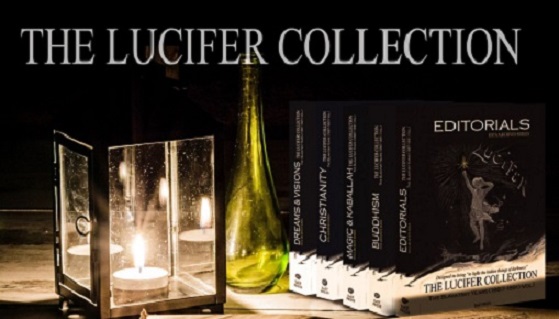 September 1887. China’s Yellow River floods killing up to two million people in one of the world’s worst natural disasters. In England almost two hundred people perish in a blaze at Exeter’s Theatre Royal. And Emile Berliner patents the Gramophone. Unknown to most people at the time, alongside these newsworthy events another significant development unfolds which will leave its permanent imprint on the world.

Inexplicably to some, controversially to many, the co-founder of the Theosophical Society and esotericist-in-chief H. P. Blavatsky chooses the name Lucifer for her new magazine designed to open the doors of occult knowledge to a wider audience. This name is almost universally perceived as a Satanic character, but Blavatsky passionately explains in her opening editorial that this is a wholly mistaken and deeply distorted interpretation of this key figure. Far from being the devil incarnate, Lucifer is no less than the light-bringer destined to bring truth to the world and illuminate ‘the hidden things of darkness’. The magazine’s chief mission, she asserts, is to ‘fight prejudice, hypocrisy and shams in every nation, in every class of Society, as in every department of life.’

She adds: ‘No fitter symbol exists for the proposed work – that of throwing a ray of truth on everything hidden by the darkness of prejudice, by social or religious misconceptions; especially by that idiotic routine in life, which, once that a certain action, a thing, a name, has been branded by slanderous inventions, however unjust, makes respectable people, so called, turn away shiveringly, refusing to even look at it from any other aspect than the one sanctioned by public opinion. Such an endeavour then, to force the weak-hearted to look truth straight in the face, is helped most efficaciously by a title belonging to the category of branded names.’

Initially co-edited with Mabel Collins, Lucifer strikes an instant chord among many prominent thinkers of the day. The public has never witnessed such a ground-breaking magazine. However, not everyone is enamoured. Predictably, some are enraged by what they regard as strident anti-Christian propaganda or an act of unparalleled sacrilege. The editors are entirely unconcerned.

Issued monthly by the international Theosophical Publication Society, it continues successfully after Blavatsky’s death in May 1891 by which time Annie Besant is co-editor. Subsequently G. R. S. Mead as co-editor assists Besant in compiling the magazine. In September 1897 its title changes to The Theosophical Review.

During its decade of continuous publication, it covers a vast spectrum of esoteric subject matter and occult wisdom almost wholly unknown in Western circles at the time. In ten years, 120 issues featuring 2,800 articles are published. Original copies are now highly prized.

Although consistently influential, never forgotten and still frequently mentioned within and beyond the theosophical movement, a rejuvenated version of Lucifer is now enjoying a new incarnation in a fresh body.

In a bid to make this historically important publication more accessible to esotericists, researchers, academics and others, the European School of Theosophy’s EuST Press has undertaken the near-Herculean task of re-issuing Lucifer in its entirety. This project is not simply about re-republishing the original issues but offering this fascinating material in a reorganised format separating the magazine’s encyclopaedic content into distinct subject areas.

The new version has been divided in two distinct streams – the Blavatsky and post-Blavatsky years. The former consists of twenty-two volumes including Poetry, Aphorisms & Proverbs, Dreams, Visions & Tales Of Wonder and Esoteric & Exoteric Christ & Church. A further twenty plus volumes cover the editions issued after Blavatsky’s death. The entire new set extending to a monumental 20,000 pages will be finalized in 2022.

The new reorganised format has been designed specifically to make it easier to identify specific topics and make some of the less well-known material more readily available. Few publications before or since have featured such a diverse spectrum of esoteric material extending from alchemy to zoology and virtually everything in between.

What emerges clearly is the astonishing energy and spirit of inquiry displayed by first generation theosophists. These early pioneers were as enthusiastic about analysing the minutiae of mainstream religions such as Hinduism, Buddhism and Christianity as they were about the spiritual practices of the lesser-known and the sometimes obscure traditions of Asia, Africa, South America and Arabia. Analysis of Sufism sits alongside analysis of Mayan traditions, ancient Greek philosophy, Rosicrucianism and Zoroastrianism.

Alongside the factual material is a fascinating mélange of ghost stories, strange tales of wonder and mysterious encounters, reflecting Blavatsky’s personal love of fiction especially the offbeat variety. Poetry, too, occupies a central role in many issues.

Among the other fascinating gems to be mined from this historic seam are the unpublished letters of the prominent 19th Century French esotericist Eliphas Lévi, intriguing insights into the Kabbalah, Mesmerism and detailed accounts of the magical arts of antiquity.

Contributors to Lucifer read like a comprehensive Who’s Who of late 19th Century occultism. Alongside material from Blavatsky, Besant and Meade are insightful articles from W. Wynn Westcott, Franz Hartman, Gerald Massey, Anna Kingsford, A. P. Sinnett, Mathers MacGregor and Archibald Keightley as well as many others.

And throughout the volumes there are many penetrative comparisons of how late Victorian science complemented or conflicted with the key principles of esoteric philosophy.

This major project has not only resurrected ground-breaking and influential material of the past, it will no doubt prove to be an invaluable legacy for those now and in the future wishing to look beyond the veil which Blavatsky finally lifted during her decades of brave exploration.

The books are available from Amazon. For further information go to: