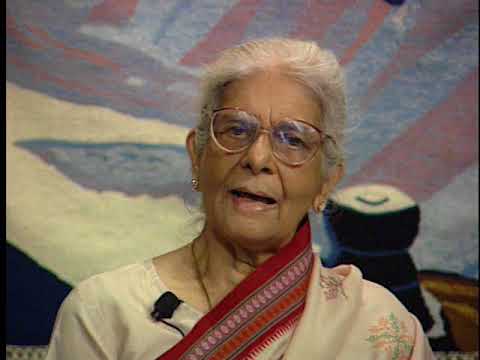 Radha gving a talk at Olcott in Wheaton in 2003

Sometimes T.S. members with their own views, who do not follow the prevalent line, are regarded as not theosophical, What are the criteria in this? Can personal views, however i irritating they may be, harm the T.S.? Or can they even help to keep the T.S. alert and alive, free of dogmatism?

EA: The T.S. is a very special institution, a strong institution. The President can close down a lodge or a section, if it does not work. It is a strong building, but has no dogma. Politicians use ideals to hold together their organization, but it is difficult to be a good theosophist if we do not have clear guidelines. We must be very alert about our aims, so that we do not become dogmatic.

CB: We should be very tolerant, very liberal in accepting all sorts of personal views, for they are essential to the life of the T.S. There is one point to which we must pay attention; that is, if someone talks against brotherhood or in racist terms. Even then we should be tolerant to quite a great extent. Only if it is very persistent and serious should some action be taken. We should, first of all, have a dialogue and discuss things, before anything is done. Personal views should normally be very welcome.

WK: It would be very nice if everybody in the lodges agreed with each other, but agreeing may make us fall asleep. Therefore it might be good to regularly encounter people with different views.

AR: There are several criteria to guide the work. Brotherhood is important, but as individuals we should try to understand life. Everything that adds to the deepening of consciousness is acceptable. And I think these two things — brotherhood and working for unity, and also the development of individual intelligence, and working together as people with individual responsibility — are important, and should be the basis of our life. They provide the criteria in that sense.

AB: In principle we have to consider the ideas of other people. But when we have members in lodges whose behavior contradicts brotherhood, we should draw their attention to the fact that they should try and change their behavior, at least during the meetings of the lodge. We may succeed in doing it without telling them directly, for otherwise we cause a lot of disharmony in the lodge, We should find some means to make these people realize that we have to practice our principles. The aims should not be somewhere up in the air, or down in the books.

LR: We must always accept different opinions and fry to be tolerant; in this we agree. But if consistently and repeatedly we find that one or more people become irrational, simply in order to be considered interesting or special, then we have to be careful for this can become destructive and create disharmony. Nevertheless, different approaches to the same problem are positive, They become harmful if they go too far. Then we should draw attention to brotherhood and to the theosophical principles.

IJ: Many lodges and sections rapidly get into problems when their presidents or general secretaries are too tolerant. In our section we have many problems, although we try to be tolerant. But the problems continually increase. It is difficult to know what approach to take towards tolerance. We need to take some action to reduce the divisions that some members create, or else they will destroy the section or the lodge. The general secretary or the president of the lodge should define the limits of tolerance, the balance between tolerance and the action necessary to end the problems.

HS: Most of those who have spoken about this have spoken in general terms. But the individual case can be very illuminating. An individual was brought by a friend to a meeting, and he fought his way into the T.S. You could not refer him to a book, because he was blind. We had dialectical battles which lasted an hour at a time. He forced people to define what they were trying to say, and the people gave him long, bumbling explanations. He would reply: 'I do not believe a word of it.' He did much good to that lodge and finally became its president. He died a couple of years ago, surrounded by the affections of all. If you deal with these individual cases in the right way, if you respond honorably to what they demand of you, often they do much good. I have noticed that when somebody comes to the T.S. and makes trouble of some sort, people will say: 'That is disturbing the group and the atmosphere.' There is far more disturbance from the disapproval which people direct at that individual than from the individual himself. When an individual keeps asking questions or attacking something, he wants to be convinced, I have come to lodges and people take me aside and say: 'There is a man who generally sits in the back row, and he always asks the same question.' Usually he is not really a nuisance, he is trying to get the answer. Often the reason why he does not get it is because the answer cannot be given in words.

RB: Generally everyone here sees the need to be tolerant, to allow freedom to other people to have their own views. Even if their views go somewhat against the principle of brotherhood, we must accept them as members unless there is a consistent racial or personal hostility, a continuous attitude of unbrotherliness. We must help such persons and with patience we may enable them to see that it is not right to be unbrotherly.

The General Council once discussed at great length the case of a lady who had suffered much in a concentration camp and all of whose family had been killed under horrible circumstances, She said that she could not like Germans. So the presidential agent in that place removed her from T.S. membership, which incidentally he did not have the constitutional right to do. The General Council decided that her feelings of unbrotherliness were understandable in the circumstances. Time should be given for feelings to die down in such a case. We must not quickly conclude that somebody is not a good member, At the same time, every one of us must exercise discrimination to see what is theosophical and what is not in ourselves as well as everywhere. Slander is untheosophical.

We cannot abandon our discriminatory powers and say that everything is all right Certain views are definitely untheosophical. If somebody fries to set up an authority in the T.S. we are bound to say that it is not in accordance with the theosophical way of working. Similarly, when a thought arises in the mind, one must see whether it is theosophical or not.

Discrimination is essential in the work of the Society. A member who is a devotee of Sai Baba is at liberty to have his pictures at home and sing his praises. But we cannot allow that in a T.S. lodge. It would be still less appropriate to appoint that person a lecturer in the section. So when it comes to the work of the Society, we have to discriminate between what creates confusion and what will help to retain the character of the Society. The T.S. stands for universal brotherhood; it has a policy of maintaining the principle of freedom. There is no authority within the Society to say 'This is the truth and you shall believe it'; there are no dogmas to be followed. It is important that this character should be maintained everywhere. We cannot have anyone in a position where what he says and thinks might mislead others about the Society, which does not mean that we disapprove of him. From the individual point of view there might be something in the experience that a person needs at a particular time. So we must not condemn anyone. Every person goes through experiences in order to mature, Who are we to say what is necessary for another? But carrying on the work of the T.S. in the right way is a different matter.