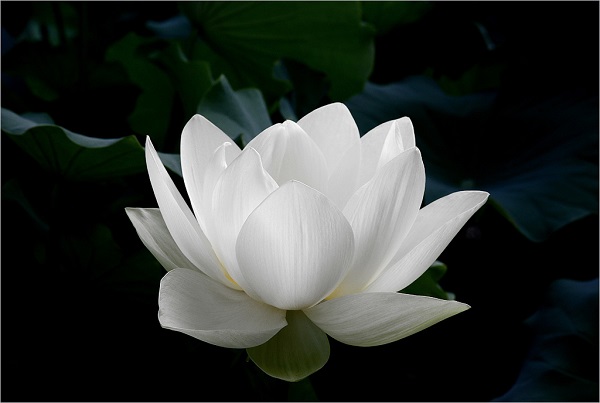 [From The Jewel in the Lotus, edited by Raghavan Iyer].

Spiritual Teachers always point upwards for each and every man and woman alive, not for just a few. They work not only in the visible realm for those immediately before them, but, as John reminds us, they come from above and work for all. They continually think of and love every being that lives and breathes, mirroring "the One that breathes breathless" in ceaseless contemplation, overbrooding the Golden Egg of the universe, the Hiranyagarbha. Such beautiful ideas enshrined in magnificent myths are provocative to the ratiocinative mind and suggestive to the latent divine discernment of Buddhic intuition. The only way anyone can come closer to the Father in Heaven let alone come closer to Him on earth Who is as He is in Heaven – is by that light to which John refers in the first chapter of the Gospel.

It is the light that lighteth every man who cometh into the world, which the darkness comprehendeth not. Human beings are involved in the darkness of illusion, of self-forgetfulness, and forgetfulness of their divine ancestry. The whole of humanity may be regarded as a garden of gods but all men and women are fallen angels or gods tarnished by forgetfulness of their true, essential and universal mission. Each man or woman is born for a purpose. Every person has a divine destiny. Every individual has a unique contribution to make, to enrich the lives of others, but no one can say this is for anyone else. Each one has to find it, first by arousing and kindling and then by sustaining and nourishing the little lamp within the heart. There alone may be lit the true Akashic fire upon the altar in the hidden temple of the god which lives and breathes within. This is the sacred fire of true awareness which enables a man to come closer to the one universal divine consciousness which, in its very brooding upon manifestation, is the father-spirit. In the realm of matter it may be compared to the wind that bloweth where it listeth. Any human being could become a self-conscious and living instrument of that universal divine consciousness of which he, as much as every other man or woman, is an effulgent ray.

Origen spoke of the constant crucifixion of Jesus, declaring that there is not a day on earth when he is not reviled. But equally there is not a time when others do not speak of him with awe. He came with a divine protection provided by a secret bond which he never revealed except by indirect intonation. Whenever the Logos becomes flesh, there is sacred testimony to the Great Sacrifice and the Great Renunciation – of all Avatars, all Divine Incarnations. The Brotherhood of Blessed Teachers is ever behind every attempt to enlighten human minds, to summon the latent love in human hearts for all humanity, to fan the sparks of true compassion in human souls into the fires of Initiation. The mark of the Avatar is that in him the Paraclete, the Spirit of Eternal Truth, manifests so that even the blind may see, the deaf may hear, the lame may walk, the unregenerate may gain confidence in the possibility and the promise of self-redemption.