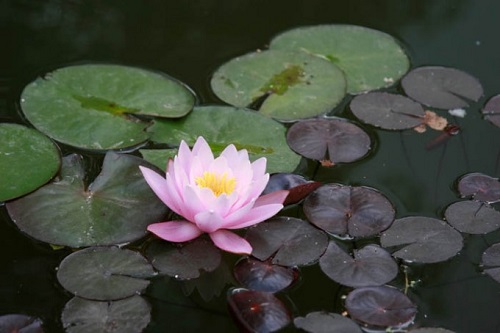 Adepts, Mahatmas, and Universal Beings are not here to consolidate anyone's pet ideas, pet likes and dislikes, but watch over those who can appreciate and enjoy what is involved in the gait of a noble elephant, who will accept it like children, who will cling to nothing. Yet many people, because of fears that are understandable enough, want to save something and therefore there is sectarianism. Coleridge put the problem very well in regard to Christianity, but it is true equally in regard to Theosophy. He who loves Christianity more than every other religion will love his own sect more than every other sect, and in the end love himself best of all. There is a logical and psychological connection between egocentricity and claims on behalf of the uniqueness of institutions or of formulations. This much is by now clear in relation to each other's orthodoxies and isms, and every man is desperately wanting to get out of the problem within himself in some way. But there is no technique. Authentic solutions involve a redefinition of self, a breakthrough – from the realm of kama manas, the psychic self, with its elaborate and boring history of likes and dislikes, fears and personal memories – to the sphere of the noetic with its golden moments of freedom of awareness, which every human soul has and which may be threaded together on a single strand.

So the problem again becomes one of sifting and of recovering continuity of consciousness. When a person is able to do these things, he can rise to those planes of consciousness where the great universal archetypal ideas are ever-present. He will also have a due wisdom in rendering them into the language and the form that is best suited to meet human need and to serve the circumstances of people's space and time. Since he would see every human being as a mirror of the whole of humanity, he would not think statistically about humanity, but know that each individual is infinitely important. He would, in other words, become an apprentice in the art of the dialectic so magnificently exemplified by the Buddha, who said different things to different individuals because he knew that the Teaching was multi-dimensional. Something of what he did under trees and on the great dusty pathways of a vast, teeming, and torrid country, of which we have images in fables, myths and legends that as much conceal as reveal what really happened, could well be true now in another form. In the old days wisdom was veiled by various devices – cryptic devices, codes, cyphers, glyphs, symbols – but also by saying too little. In our time wisdom is veiled by seeming to say too much. There is a luminous nature in The Secret Doctrine enabling an incredible concealment which the Intuitive student can gradually learn to enjoy. The most ineluctable forms of priceless magic and incantatory mantramic teaching reside within the foliage of references that connect at many points with the complicated and many-sided story of the soul of man.

That, then, is our heritage. It is universal not merely in an abstract sense. It has amazing diversity, and the variety is infinite, as is the wonderment of the Theosophical enterprise. But the point is not whether a person goes this far or adopts that way, but whether at any level he is able to develop the fruit of his study and meditation into an authentic capacity to draw the larger circle. We should truly try to put ourselves in a proper mental relationship – for some of us this may come naturally, for others this may be a strain, but every man could attempt it – to the Brotherhood, to the Mahatmas, to Beings like H. P. Blavatsky. We should see her in a long lineage of Teachers and do the same in regard to one or all the Teachers. We may choose any as our particular Ishtaguru. If we could really do this, then it would truly be possible to become capable of negating those thought-forms that become divisive sources of human suspicion. It would become possible to make that extraordinarily elusive linkage between the eternal and the momentary but timely, the appropriate and the relevant, the abstract and the concrete – the dynamic relationship implicit in the divine dialectic.

This is challenging because synonymous with living. But when a person does it with the help of the knowledge that he gains from Theosophical Teachers, it is living dangerously. It is living with a new self-consciousness, living with increased pain and anguish on behalf of human beings, living with great heightening of joy that may make one manic at times with regard to the Divine Dance of the whole of life and of history. That is why people today and in the future are really going to make Theosophia important in their lives, especially the young, the lost and the rootless. It is a whole way of life. It is too late for the equivalent of going to churches on Sundays, synagogues on Saturdays, mosques on Fridays, temples on Mondays, and so on. It is too late to find the equivalent of all the elaborate complexities of human attitudes towards the Vedas or the Bible in our attitudes towards Theosophical texts. It is the all or nothing attitude that could be dangerous on the plane of the mind but is, for many, part of the historical compulsion of our time.

Therefore, as the Maha Chohan stated in his letter, unless Theosophy can be shown to be relevant to the most crucial problems that affect mankind as a whole, and involve ultimate questions in regard to the very struggle for existence and the meaning of life, Theosophy will not be relevant. The Fraternity will have nothing to do with it. Perish the thought, says He, rather than that They should have anything to do with anything that evades the crucial issue – the full demands of universal brotherhood in thought, feeling, word and deed. So They have spoken. They have spoken in terms of the immensity of the challenge. The Theosophical Movement of the nineteenth century, like the Constitution of the United States, is an educational phenomenon where the invisible Founding Fathers knew that it might take a hundred years for people both to see that it is not easy and that while it looks irrelevant, it had better be made relevant. This may take the coming hundred years for those individuals who really are alive to the problems of our time and worthy of the enormous privilege of the inheritance that they have as students of Theosophy. They must at the same time have the proper posture in regard to the Fraternity of Teachers who are invisible, but who could become more real than anything else, according to a person's degree of development. Anyone could come to see in the future a new relevance, a new magic, a new significance to the work of H. P. Blavatsky and her predecessors.

Therefore, as the 1975 cycle unfolds, we must become less apologetic in every sense on behalf of, or about, any aspect of the Teachings, and we need be less concerned with claims. But at the same time we have to be immensely and actively concerned with the effective embodiment and translation of Theosophical ideas and principles that can be seeds for meditation, because the pioneers of the future want to learn about meditation. If they cannot learn it under a banyan tree, they are willing to learn it in a cafe. But they seriously want to learn about it. Of course, there are many mistakes that they could make. How could we be of any help unless we ourselves have attempted it enough to be humble about ourselves, while at the same time remaining proud about the undertaking. One might say that the Theosophist of the coming cycle will be the kind of person who will show himself not merely by his acts, but by the whole of his mental attitude to other beings, from the most exalted to the most wretched. He will show that it is more important to travel than to arrive; that there is a difference between perfection and perfectibility; that it is true, as Samuel Butler wrote, that everything matters more than we think it does, and at the same time nothing matters so much as we think. It is true that to become a Buddha is impossibly difficult, but it is equally true that it could be said of every man “Look inward: thou art Buddha.”

Theosophy must be both as elusive as the empyrean of the most universal kinds of space, time, motion and matter, and as close to home and as real as our daily breathing. It must be relevant to our every problem. This will be eternally enigmatic. In a Platonic sense this could never be taught, could never be learned, but could only be developed by a series of intimations – efforts at living by these ideas – so that the whole world becomes for every one of us, as it became for Arjuna, a Kurukshetra, a theatre of trial, a tremendous drama in which the stakes are high. But the stakes are not high for us as separate beings who are going to be individually saved or damned. They are high for us all collectively, even at a time in which there is a great deal of absurdity. We must learn to become the psychological equivalents of those who can ascend and descend into the depths like divers, adapting ourselves to different altitudes and perspectives, becoming flexible and multi-dimensional. And we must do this with a certain panache, but in every case as the result of honest striving, and with compassion, with laughter and love. This is existentially to show what it means in our time to be a true Theosophist, and anyone who wishes to do this might well reflect upon the timeless injunction of Mahatma K.H.: “If you wish to know us, study our philosophy. If you wish to serve us, serve our Humanity.”