The Imperative Need of Ethics 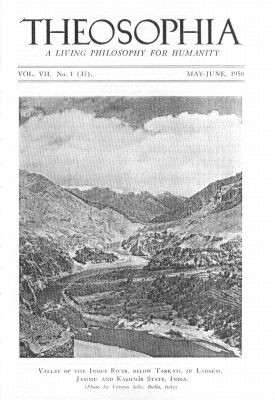 As we pass the seventy-fifth milestone of the modern Theosophical Movement, many thoughts come up for consideration, and many ideas suggest themselves.

We see today an entirely different world from the one which was familiar at the time when H.P.B. laid down the age-old principles of the Ancient Wisdom in terms adequate to the present age.

A great number of her prophetic statements, particularly those relating to the development of modern Science, have become actualities. Yet we witness at the present moment that same Science, proud of its mechanical and at times philosophical achievements, meekly subordinating itself to the authority of military cliques, and falling prey to the selfish schemes of power-politics, those two infernal broods of man's lower mind, begotten of his lust for power and coercion of other men.

Freedom of scientific research and of intellectual intercourse among scientific men the world over is shackled today by forces which are nurtured by fear, desire for exploitation, and the selfish passion for separateness and division - in a world which is gradually realizing its complete and irrevocable Unity, its spiritual, intellectual, and physical solidarity and integration. And the only way by which Science - that veritable goddess in the estimation of millions - can ever regain the freedom so essential to its growth and unfoldment, is through the instrumentality of men and women who have enough courage, boldness, and self-sacrificing love for Truth, to wrench both scientific knowledge and the Means of scientific research from all parochial, nationalistic, and sectarian domination, for the sake, and in the name of, Humanity as a whole. Where are these men and women? Let them come forth and make themselves known before it is too late!

Nevertheless, it would be a grievous mistake to picture modern Science as a beautiful and meek goddess that fell into the hands of scheming leaders bent upon its subjugation. Science, as such, and men of science individually, are themselves greatly to blame for this state of affairs. Most of them have extolled for a generation or two the marvel of mechanical inventions, and the wonder of theories and speculations which were supposed to explain the nature and structure of matter itself; and this they have done in utter disregard of the ethical implications which were and are inherent to their own scientific research and accomplishment.

Science, as research and as occupation, either freighted with discoveries already made, or fraught with potential discoveries of the yet unknown but not unknowable, should be in the very nature of things firmly rooted upon a foundation of Ethics, all of its achievements should be projected, as it were, against the background of those foundation-principles of human conduct which alone can safeguard humanity as a whole from the misuse of scientific knowledge by others, for purposes of human destruction or exploitation or enslavement. Unless Science becomes, and rapidly and universally so becomes, imbued with the realization of the ethical implications connected with its work, it will progressively become a more and more dangerous weapon with which one portion of the human race will be scheming the annihilation of the other, and vice versa. How far from that are we today?

Do we need, therefore, less science than we already have? Not exactly. But we do need less emphasis upon certain aspects of science, those conducive to further misuse and misapplication; and we do need a great deal more science and research along such lines as are concerned with human behavior, individually and collectively, and the welfare of mankind on the global scale. The Science of the Atom could very well wait, until the Science of Man has been given a chance to bring up the rear!

We are reminded of the wise words of Sir Alfred Ewing, one-time President of the British Association for the Advancement of Science (The Literary Digest, Oct. 15, 1932.):

“It is impossible not to ask, whither does this tremendous procession tend? What, after all, is its goal? What is the probable influence on the future of the human race?

“The scientists and engineers have dowered us with previously unpossessed and unimagined capacities and powers.

“Beyond question many of these gifts are benefits to man, making life fuller, wider, healthier, richer in comforts and interests and in such happiness as material things can promote.

“But we are acutely aware that the engineer's gifts have been and may be grievously abused. In some - there is potential tragedy as well as present burden.

“Man was ethically unprepared for so great a bounty. In the slow evolution of morals he is still unfit for the tremendous responsibility it entails. The command of nature has been put into his hands before he knows how to command himself.”

Some years of world-agony followed this statement. Sir Alfred Ewing was right. What would he say in 1950?

Nor was he the only one to feel the way he did. Another man of genuine greatness of both mind and heart, Pierre Lecomte du Nouy, delivered himself of a statement which is of equal moment and even greater urgency. He wrote (Human Destiny, p. 139. Longman, Green and Co., N. Y., 1947):

“Man must be made to understand that the mechanical transformations he has introduced in his environment and his adaptation to them will mean either progress or ruin according to whether or not they are accompanied by a correlative improvement in his moral attitude.

“The duty of man, therefore, is to rout out this false symbol of civilization and to replace it by the true one: the development of human dignity. Not by combating mechanical progress which would actually be impossible, and might be disastrous because of the progress which must still be made in the realm of pure science and of medicine - but by instructing mankind and raising its moral standard.”

Such pronouncements as these should become the everyday concern of all scientists the world over. If backed with moral courage, determination and the will to action along the highest lines of ethical conduct, such realizations and convictions might well liberate all scientific endeavor of the present generation from its shameful subservience to the selfish interests of the few.

It has often been said by students of Theosophy that Science and the Ancient Wisdom are allies in the Cause of Truth. This is true only if we look upon Science as including the vast domain of human psychology, ethics, behavior and morals. As long as modern Science has its center of gravity in the realm of the “intangible,” which, oddly enough, has a tendency to become fully “tangible” in terms of bombs, missiles, rockets, and the like, the Ancient Wisdom can hardly be called its ally. It may be so if only scientific laboratory speculations are taken into consideration, prior to the time when they become transfigured into weapons of destruction. But the real and only genuine integration of Theosophy and Science can take place exclusively along such lines where the ethical and spiritual background of the age-old teachings blends with the ethical realization of scientific researchers in their endeavor to build the foundations of a good life for mankind as a whole, and to dedicate their entire effort to the betterment of man's nature and the integration of the human race into one Brotherhood.