A Legacy of Wisdom 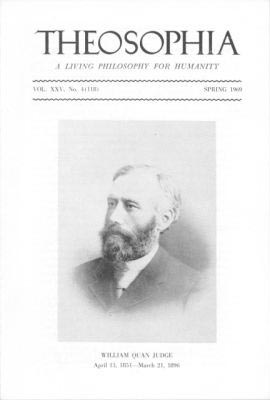 This lesser known article by Joy Mills appeared in Theosophia in the spring of 1969. Boris de Zirkoff was the initiator and editor-in-chief of this periodical.

Those whose lives have been touched in whatever manner by the theosophical philosophy have become heirs of a great tradition of an immortal wisdom. Knowledge of that tradition can be gained by study, by contemplation, even by discussion of the principles of the wisdom with others. But wisdom itself derives from a total knowing in which understanding is constantly expressed in all the modes of living. The legacy of wisdom to which we are heirs today is of such a nature that unless we are transformed by its vital quality, it can remain a sterile possession, locked in books and inaccessible to experience. A fundamental premise, presented in The Secret Doctrine, suggests the existence of an accumulated wisdom of the ages, today verifiable by experience and, capable of being tested by scientific premises. This knowledge, attested to by generations of seers and sages, can be said to constitute a pentagram of law, which finds its ultimate summation in man.

In the hands of its Guardians, who are the Adepts of the Wisdom, this knowledge is much more than a mere collection of doctrines; it is an evolving, living whole, as alive as the universe which is its visible expression. To assemble facts is not to encounter wisdom; to lay on a table all the component parts of a clock is not to experience the action of a watch nor is it to understand time. The legacy of wisdom to which we today are heirs is a total wisdom, each principle of which is but an aspect of the whole, and the whole is the expression of the all-embracing Consciousness that is the universe. As transmitted to us by that remarkable messenger, H. P. Blavatsky, the wisdom unfolds in a natural sequence of understanding, forming, as has just been suggested, a pentagram of law.

Primary among the principles is the fundamental premise that there is a Universal Reality, in which all is grounded, whose essence is Absolute Unconditioned Consciousness. The real is wholly non-material, as science today is discovering and demonstrating; Reality is, no matter what happens in the universal force field of infinite potentiality. We are embedded in that one Reality, and all transient “realities” obey the laws of the universal, impartible Reality. Its primal quality is awareness, consciousness (Chit), and so the universe is through and through conscious and alive; in and of itself, that Reality is timeless being (Sat), and its essential nature is harmonic in quality (Ananda), permitting by its very nature the beauty and bliss of order to arise in natural sequence.

So the second premise arises from the first: the universe and all phenomenal forms are the periodical manifestation of the primal Reality. Matter is an excrescence, an ejection of Reality, a device of Reality, operative from within outwards. Matter is then the precipitation of energy, never divorced from its source but appearing externally as the transient demonstration of the One Reality; the universe of being projects the universe of process. That projection is periodic, in accord with the inherent rhythm of consciousness. Everywhere occurs the pulse-beat of Reality, sometimes quickened to self-awareness as in man, sometimes slowed down to nearly immeasurable cycles as in the geologic ages. (Not very long ago, a scientist reported: “The pulse-beat of planet Earth has not yet been counted. But a pulse is there ... A rhythmic throbbing in the magnetic shell enclosing the planet arises from the solar wind ... Within the magnetic sheath, Earth’s atmosphere expands and contracts ...”) The throbbing pulse-beat of Reality unfolds upon itself to reveal its own privations, to define itself in boundaries, for there is within the primal Reality the dynamism of its own nature. The word Fohat has been assigned to that dynamism which is yet undiscovered by science, except in its effects.

The universal field is non-operational existence. The activation within the universal field of Reality of that which is known to the occultist as Fohat results in operational universes, which are transient and temporal, and constitute shadows across the Real. So the third premise: the universe is called Maya because all is temporary therein, although it is real enough to the conscious beings who move within it. That which was infolded in simultaneity within the universal Real is now unfolded sequentially, in the processes of time and evolution; hence, it is termed Maya, for it is subject to measurement. Man, as a self-conscious being, learns to utilize time, to work through it and with it, to achieve the processes of evolution. Man is, in consequence, the measure of all things, as well as the measurer of all processes, manipulating both time and process.

The fourth point of the pentagram is the basic premise that everything in the universe, throughout all the kingdoms of nature, is conscious, endowed with a consciousness of its own kind and on its own plane of perception. Since the fundamental Reality, non-partable and non-material, is through and through conscious, even though the phenomenal constitutes a shadow upon that Reality, it is still rooted in primordial consciousness and must therefore participate in consciousness. All is embedded in the Real, revealing itself in the sequences of time, and consequently, in accordance with the fifth premise, the universe is worked and guided from within outwards. Design, pattern, form, are emergent.

So we may visualize the five essential points of a timeless wisdom, a pentagram of law to which all nature conforms and which finds its ultimate expression in man; who is the localization of all that is present everywhere in the universe. Traditionally, the symbol of man has been the five-pointed star; each point may represent a universal law which man, by his very nature, embodies. His task, then, is to become the law he represents.

Man, however wide his reach, however tall he grows, must still stand upon the earth; his feet must be planted somewhere, for there must always be some base upon which he stands, and his vision proceeds from where he is. So standing here, with vision what it is - limited and defined by our present state - we may still grow upwards, until consciousness expands to the five-fold points of wisdom, and we realize what has been true from the beginning, that we are deathlessly rooted in the Self-Existent]

The attainment of that realization is a scientific process, to which may be given the name “the Path.” For doctrine, however noble, is not enough. Principles, however lofty, do not suffice. As the Pseudo-Dionysius put it: “Man must not only learn the truth; he must suffer it.” There is a Way to be found and trodden, though there are a thousand approaches to the entrance of that Way. The Way itself is one and the pupil is self-chosen. The legacy of Wisdom which is ours reveals the nature of the Way; one finds the ultimate reality by living it out. By our own efforts we develop the tremendous potential of consciousness, by meditation and “right mindfulness,” we “recollect,” as Plato described it, that which we truly are. Learning to forget the claims and desires of the transient self in a purpose of living which is now rediscovered, we learn to apply, with deep compassion, all that we are and have to the service of mankind. For man is self-committed to further, in a self-conscious manner, the entire process of which he is a part.

But this commitment demands a radical departure from the normal evolutionary pattern; it calls for a new mode of growth - no longer growth in the linear sense of sequence, but a self-transformation that takes place from within. The most useful analogy is the process of metamorphosis. A caterpillar does not become a butterfly through any process of linear growth, becoming merely a larger and larger caterpillar; the process is achieved only when the caterpillar winds itself in its own cocoon, isolates itself from the outer environment on which it has fed and depends solely upon its own resources for an amazing transformation. There inside the cocoon occurs a nearly miraculous process: all the larval organs disappear, reduced to an amorphous, formless, viscous emulsion, having no discernible structure. By some miracle of reorganization, which biology cannot explain, directed by a mysterious dynamism which science has not yet named, energized by a force unknown to physics, this formless and apparently dead emulsion transforms itself into the butterfly. That which was once the caterpillar is now a thing of wings and beauty, adapted to a wholly different environment, the air, and fitted for a totally different mode of life.

So man, self-consciously and by self-devised effort, may achieve a transformation comparable in scope, equally magnificent at another level of realization, emerging from his caterpillar existence as a thing of earth, experiencing linear growth through successive incarnations to the freer life of spiritual regeneration.

Here, then, is our legacy of wisdom: we are heirs of the ages, holding in trust a sacred pledge. But it is more than knowledge that has been given to us, and more than knowledge that we must pursue if the legacy which has been bequeathed to us is to be transmitted in its magnificence to those who come after us. We must encounter truth in so intimate a manner that it takes hold of us and possesses us; we must transmute the universal principles in the fiery furnace of life’s experience into the gold of wisdom, becoming the self-transformed and the self-transforming. The eternal principles of the wisdom are not without us, external to us, acting upon us; they  are the essence of our very nature: we are the pentagram of law. To know this is to see life whole, to perceive the uncompounded vision of Reality, and so to live and act that the legacy of wisdom to which we today are heir can never be lost to mankind.