[This article appeared in the February 2018 issue of The Theosophical Movement. For more articles published in this excellent magazine follow this link: http://www.ultindia.org/previous_issues.html ] 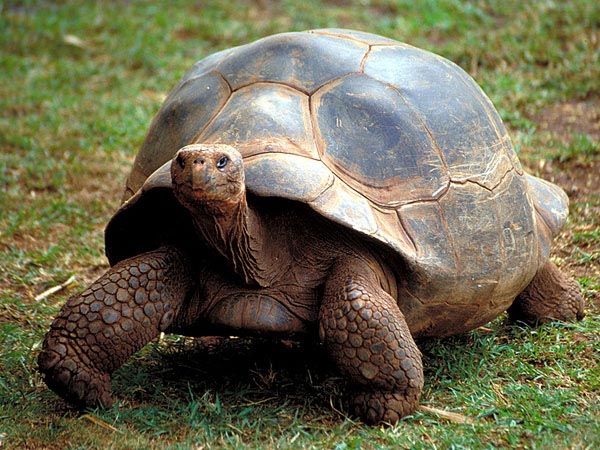 Giant tortoises are rare today but once roamed four continents. According to a new theory, tortoises evolved into giants on at least seven occasions and four continents, undermining the long-standing idea that tortoises become enormous only if they are stranded on remote islands. For instance, giant tortoises are found on the Galapagos Islands in the Pacific Ocean, and Seychelles islands in the Indian Ocean, having shells more than 120 centimeters long. It is amazing that though these islands cover an area of only a few thousand square kilometers, as contrasted with the Earth’s continents which cover around 150 million square kilometers, they are home to just one truly large tortoise, namely, the African spurred tortoise. This implies that tortoises are most likely to become huge when they live on islands, which is in line with a famous but controversial concept, the “island rule.” According to this rule, on islands, small animals tend to evolve larger bodies, while large animals evolve to be smaller.

However, fossils show that giant tortoises once roamed Africa, Eurasia and the Americas, suggesting that tortoises do not need islands to evolve to be larger. According to Yuval Itescu at Tel Aviv University, Israel, there are two competing hypotheses that seek to explain the presence of giant tortoises on remote oceanic islands: Either they were giants when they reached these islands, or they became giants on the islands. It is crucial to know what their ancestors were like.

Researchers have drawn tortoise family tree using data from extinct and living species. The tree suggests that the first giant tortoises, with shells at least 80 centimeters long, evolved 37 million years ago in Africa and Europe, which gave rise to continental giants. According to Evangelos Vlachos at the Museum of Paleontology Egidio Feruglio in Argentina, tortoises tended to become giants on continents, so that giant tortoises found today on remote islands were already big before they arrived. In other words, gigantism evolved on continents, ruling out island origin for gigantism. However, “it is now even less clear why tortoises sometimes evolve into giants. Gigantism seems to have evolved on different continents at widely different times,” writes Colin Barras. (New Scientist, December 16, 2017)

Theosophy teaches that giants are not fiction. In remote antiquity both man and animals were of gigantic stature, but in astral form, and that is why man could co-exist in the same place with huge birds and reptiles without fear. Then man’s body began solidifying, or becoming dense, and as he thickened the animals grew smaller. In the section, “Are Giants a Fiction?” (S.D., II, 277) which mainly seeks to prove that men were gigantic in stature in early antiquity, H.P.B. quotes the argument put forward by Charles Darwin that the species of animals which result from cross breeding “always betray a tendency to revert to the original type,” and she says that scientists should apply this law to men, because had there been no giants in the ancient days, there would be none now. The same argument holds good for animals. At more than one place in her writings it is made clear that in the remote past, both in astral and physical form, there were giant men and animals. Giant men and animals flourished on the Lemurian and Atlantean continents. Some of the islands today, with gigantic animals on them are remnants of these two continents which have been submerged and have disappeared millions of years ago.

Mention is also made of monstrous Sivatherium in the Himalayas, the four-horned stag, as large as an elephant, and exceeding the latter in height; of the gigantic Megatherium: of colossal flying lizards, Pterodactyli, with crocodile jaws on a duck’s head. H.P.B. points out that “the few remaining giant animals, such as elephants, themselves smaller than their ancestors the Mastodons, and Hippopotami, are the only surviving relics, and tend to disappear more entirely with every day. Even they have already had a few pioneers of their future genus and have decreased in size in the same proportion as men did.” (S.D., II, 218-19)