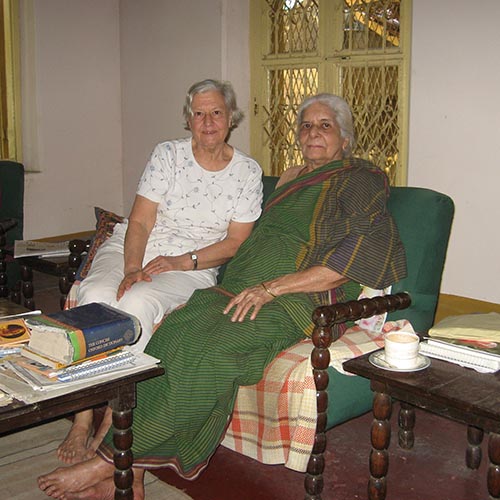 Radha Burnier at her quarters in Adyar with Elisabeth Trumpler, who was the Head Librarian of the Henry S. Olcott Memorial Library, in Wheation

How can one simultaneously perceive oneself and forget one­self?

CB-W: Maybe when one perceives oneself one cannot forget oneself.

CB: Perhaps if we can see ourselves and the things we do as part of the play of life, as an example of how Life expresses itself, then we see that it is of no importance that we are here. What we see is something that is happening in the universe and is part of the universe.

GH: Maybe if we could perceive ourselves in the same way as we perceive everything else in this world, there would be no division and no special need to forget ourselves.

RB: I wonder what we mean by 'ourselves'. How can one perceive oneself and forget oneself? Who i8 the one who perceives, the one to be perceived, and the one to be forgotten? Perhaps we have to examine the whole question rather than answer it here.

If we observe carefully, we wonder what is oneself. There is one part which says ‘1 am going to the next room,' another part says ‘The body is going there.’ Most of us realize from time to time ‘The body is not myself.’ One can then put aside the idea of the body' s being oneself, at least intheory. We realize that things like hunger and pain belong to the body. Then we perceive that there are emotions and thoughts, but they fluctuate. One day there is elation, another day there is dejection. Is the elation myself, or is the dejection myself, or is the ‘myself’ a fluctuating thing? Perhaps we will get a feeling that this changing psychological condition is not myself. Then what is the self that one is observing? If one goes on quietly looking and looking, then one may see that 'oneself' does not amount to anything at all.

Then what is myself? It is a kind of non-existent entity, but we have got accustomed to thinking that it actually exists. We have imagined that there is myself, from which the fluctuations and the distractions come, to which knowledge and enjoyment belong. But the more you look, the less you find Words are wrong, but there is no other way of communicating. When one says ‘the more you look’, who is the ‘you’ who looks? So, the more looking there is, the less there is to find, and it becomes clear that there is really nothing there. That is the self which has been forgotten, because what we imagined to be ‘myself’, the centre, is discovered not to exist.

Perhaps this sounds a little metaphysical. But it may be simple and practical in daily life to watch and see the self in action. We can see it only when it moves; if there are even a few moments when the mind does not move, and there is absolute quietness, there is no self to see. The self is seen to exist only in relation to the ‘other’. I say: ‘I like the rose’; this means I observe the rose, become conscious of myself and the rose. This happens also in relation to images in the mind. We observe all this and realize that from a centre inside, movements of struggling, grasping, liking etc. take place. Reflection shows that a lot of it is futile, unnecessary, harmful, and then it quietens down.

If we are looking or listening attentively, in the moment of attention there is no self. When there is a deep sense of beauty, a real sense of love, not what we usually call1ove, the self does not exist, it is ‘forgotten’. The perceiving and the forgetting may not take place all the time, simultaneously. As we move along, sometimes we may be perceiving, and little by little erasing the self, sometimes we may be watching and listening quietly, and there are the moments when we are not so aware of ourselves, and there is peace. But to perceive the self as nothing – it was only imagined to exist – which is not exactly forgetting it, is really to transcend it. None of us has done it, so there is nobody who can give a really good answer.

Why is it that we cannot or will not take the last step, and let go of everything?

WE: We must first take the first step, every day, every minute. A time may come when we can say: there is also a last step. I don' t know. For us, taking the first step now is important.

RB: We should start with the first step, and not with the last.1f we imagine ourselves as taking the last step, it seems grand. We picture ourselves as heroes who accomplish something extraordinary. Why don't we begin to let go of all the things to which we are attached? It does not mean that one should throwaway one's things, or anything like that.

The Yoga-Vasistha is an ancient text held to contain profound truths, although much is presented in the form of stories. The Indian Section has published a special issue of its journal containing some teachings found in the book. There it is told that a certain king sought the way to liberation. He meditated for long periods, but nothing happened. Then he gave up his vast possessions, and went to the forest. There he meditated again for years, but nothing happened. Then he discarded the few things that hermits are allowed to have. Still nothing happened. Finally, a holy Brahmin appeared before him, and the king realized that he was attached to the idea of liberation. Only then did he become free. He returned to his kingdom and lived happily ever after.

This story teaches that letting go is not a question of just giving up material objects. Acquisition can be a symptom of attachment, but the main thing is to see the attitude of mind. Is it inwardly attached? If the letting go is painful, it means it is attached. We may be attached to ideas, to our own image, and so on. We must find out how we are attached, to what we are attached, and what is the nature of attachment.

Why do we cling to things which we know to be temporal?

Death at one stroke removes everything from us, and tells us that this is what must happen. But we do not learn to let go, to prepare for death as Socrates and others have advised. We cannot hold on to anything. In one of his books, CWL says that if there is one thing of which every person can be certain in life, that is death. Our own death and everybody e1se's death is certain, but we behave as if it is the most unexpected and unfor­tunate of things. Why don’t we see that we have to part all the time, and learn to part wisely and cheerfully? If we begin to let go, become less and less attached, then the last step may come.