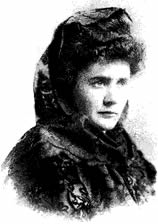 Esther Bright, a pioneer in Co-Freemasonry in Britain in 1902, was a helper and close friend of Annie Besant. She was born on February 19, 1868, daughter of Rt. Hon. Jacob Bright, British member of Parliament and Ursula M. Bright. She joined the Theosophical Society on September 7, 1891, and was an active worker for many humanitarian movements. Her publications include The Ancient One (1927) and Old Memories and Letters of Annie Besant (1936).