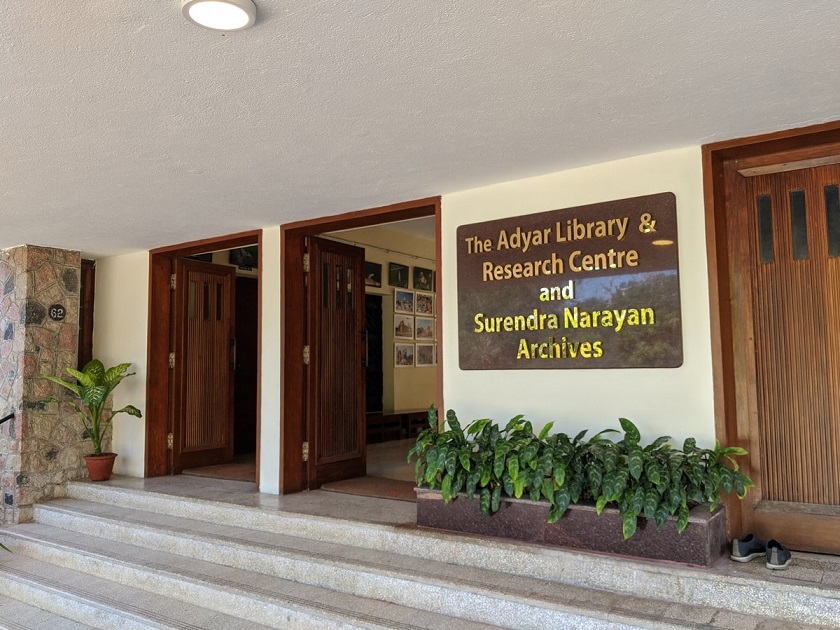 Radha was a third-generation Theosophist. Her grandfather, A. Nilakanta Sastri, was an early member of the Society, much inspired by the Founders of the Society when they came to India and Madras.

As a child, she had the opportunity to make the acquaintance of Annie Besant, then president of the Theosophical Society, of which she kept some memories as an adult.

She was educated in the National Girls’ High School, which was founded by Theosophists. Later on she went to the Banaras Hindu University from which she obtained a B.A. with distinction and a M.A. on Sanskrit, standing first in that University.

Early in 1951 Radha Sri Ram married Raymond Burnier, a Swiss photographer, who helped her begin a brief film career. He had come to India in 1932 to photograph temple art, and met young Radha at Hindu University in Benares. They were soon divorced.

From 1938 to 1944 she studied classical Indian dance with her aunt Rukmini Devi Arundale at Kalakshetra, the Arts Academy that worked in the campus of the Theosophical Society. She was the first student to graduate in Bharata Natya from Kalakshetra and gave dance recitals in many cities in India and abroad.

The American Theosophist in May, 1942 reported this account from a member who visited Adyar:

We recently had the great privilege of attending a recital given by her [Rukmini Devi's] very best pupil, Shrimati Radha, Sri Ram's daughter. It was a most perfect display of vital power, a thing only possible, I think, as a manifestation of inner possibilities and capacities. I myself have seen much of Oriental art, especially of dancing in Java, but never have I witnessed anything like this. A great future seems to lie in this work

Cover for the Movie The River featuring young Radha Burnier

Mrs. Burnier played a major role in the well-known director Jean Renoir’s classical film The River (Le Fleuve), based on Rumer Godden’s novel. The film was made in only five months, and was released in 1951. The producer, Kenneth McEldowney, made four trips to India in a year and a half, trying to cast the role of Melanie, because most Indian women were not permitted by their families to perform in a film, especially in a role that involved a kiss. When he met Radha, he was skeptical until he saw her dance. He said, “She was magnificent. She is like a goddess.” His wife Melvina wrote, “I never knew a goddess could have such a delightful sense of humor, such honest intelligence, such understanding of people and still be so young.” Her family’s broad-minded view of culture permitted Radha to accept the film role.

Shortly after her marriage, the Burniers travelled to Beverly Hills, and then to New York with the Renoirs. She wrote in a letter to James S. Perkins,

You must have read in the papers about my marriage with Raymond Burnier whom you met in our house at Adyar. This, and other business connected with the film, have forced me to change my plans. We and the Renoirs and some other people are going to New York where we will see the color-print of the film. . . I am extremely sorry that I will not be able to be present at the Convention.

The film was well received and was influential to several Indian and American filmmakers.

During this time she met some famous people such us Charles Chaplin, with whom she shared a meal. Radhaji was offered to participate in movies produced by Hollywood but declined the offer.

Radha Burnier joined the Theosophical Society in 1935, when she was still 12 years old, and from 1945 onwards became actively involved with its various activities.

She was also the president of several Theosophical centers such as the Krotona Institute of Theosophy in Ojai, California, USA, The Manor Centre in Sydney, Australia, and the International Theosophical Centre in Naarden, Holland.

President of the Theosophical Society

Mrs. Burnier was elected international president of the Theosophical Society (Adyar) on July 4 1980, and took office on July 17. She was eventually re-elected five times in that office. She was the seventh person to hold this office in the Society since it was founded in 1875, and was the longest standing President (33 years).

She presided over four World Congresses of the Theosophical Society: 1982 in Nairobi, Kenya; 1993 in Brasilia, Brazil, 2001 in Sydney, Australia; and 2010 in Rome, Italy.

While president, she frequently lectured all over the world. On three occasions she was asked to present the prestigious Blavatsky Lectures at the Theosophical Society in England. In 1979, her topic was "Self-Knowledge in the Light of Theosophy", published as "The Way of Self-Knowledge." In 1988 she spoke on "The Universal Yoga Tradition", and in 2005 it was " Living Truth: The Future of the Theosophical Society."

Radhaji's approach to  was that it should not be taken merely as a conceptual spiritual philosophy, but as a tool to produce a human regeneration. The wide and deep perspective of life and human beings that Theosophy offers is meant to give individuals the right perspective so that their actions can be wise and have a transformative effect.

Although she was actively engaged in movements that worked on an external level to palliate the effects of suffering on human beings, animals, and the environment, she viewed the role of the Theosophical Society as having to do primarily with the inner, rather than the outer, challenge:

I think the work of the Theosophical Society is to point to the challenge within, because it is of much greater importance to see it and deal with it than to go on dealing with what is outside. If we do not look at the source of the problem, but only at the effects, then temporary, partial, and superficial solutions are found.

To me it is clear that the main work of the T.S. is to point to the internal change and to help the world to deal radically with its problems. We must not become a group of people who are only interested in altering structures, systems, and methods. I am not saying that we should not participate in bringing about changes externally. But that cannot be the fundamental work of the Society.

She frequently spoke about the need to produce a radical or fundamental change in the human being:

The fundamental change is therefore from selfishness, which is also self-centredness, self-preoccupation, and so forth, to a state of sympathy, harmony, and unity, where other people's well-being is realized to be of as much, if not more, importance than one's own.

This change has to happen on an individual basis, but with an eye on the whole humanity. She stated that "Human society cannot change unless the individuals change, and the change must be in the direction of universality of outlook".

On the morning of October 31, 2013, Radhaji woke feeling uncomfortable and unable to breathe. She was attended to by two doctors and given oxygen. She rested most of the day as she did not feel well. She was visited in the evening by the Vice-President Mahendra Singhal and his wife Shashi who, before leaving for Bali to attend the Indo-Pacific Conference in Radhaji's stead, had come for her blessing. She stated she was very happy they were going and wished them safe travels.

She seemed to know she was near the end of her life as she told the vice-president that she was going to have her overnight help sleep near her bed in case she passed. Around 9 p.m. she had an acute myocardial infarction (heart attack) and died peacefully at home.

After her body was prepared, she laid in state at Headquarters Hall in Adyar through the rest of the night until her cremation at 2 pm on November 1. Over 500 people (including the vice-president who cancelled travel plans) came to pay their respects as the news of her death became public. Radhaji's ashes were consigned to the Garden of Remembrance on the evening of November 1, as is tradition with Theosophical presidents, and to the Bay of Bengal.

For much more on Radha Burnier go to: https://theosophy.wiki/en/Radha_Burnier

The rare and historical photos which now follow, were taken long before the digital era; they had to be resized and edited in order to prepare them for publication. Although some of them are not 100% quality-wise, they certainly transmit very clearly the work of an amazing woman who dedicated her entire life nobly to Theosophy, serving mankind.The collection is not chronological or complete; it offers moments in the life of Radha Burnier, All the images were carefully selected by the officer in charge of the Surendra Narayan Archives, JAISHREE KANNAN. Special thanks to JANET KERSCHNER, archivist at Olcott in Wheaton, whose unswerving work for Theosophy Wiki deserves our respect. Theosophy Forward’s editor is grateful for their wonderful cooperation. 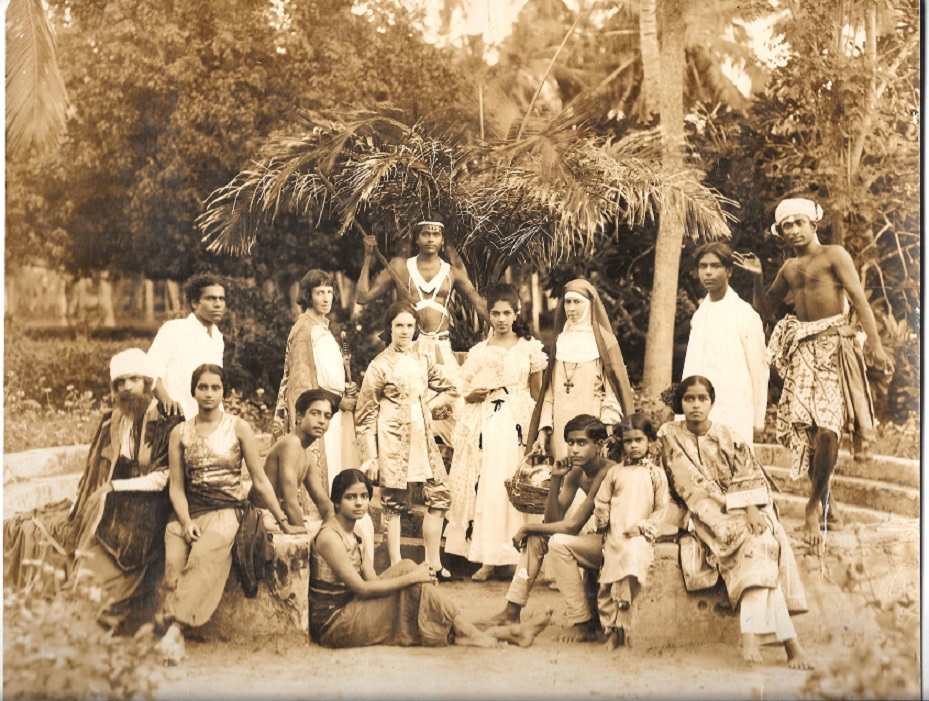 Radha as a very young girl, sitting second from the right, with the cast of a play perfiormed at Adyar. Around 1927/1928 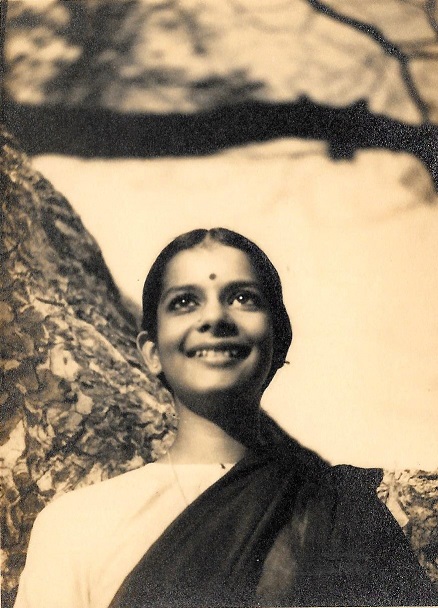 Radha, with this heartwarming smile of hers as a teenager 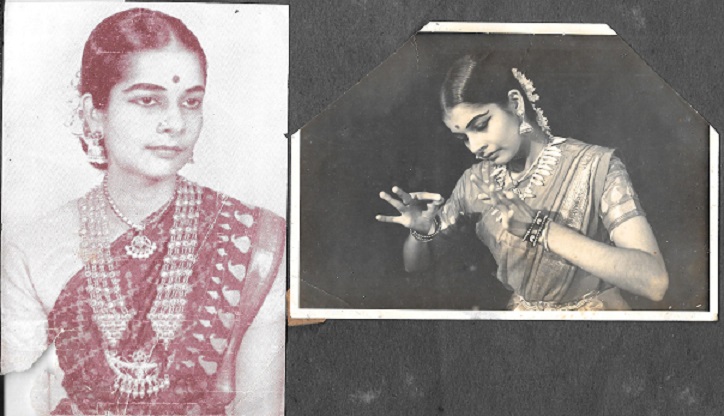 Radha as a dancer 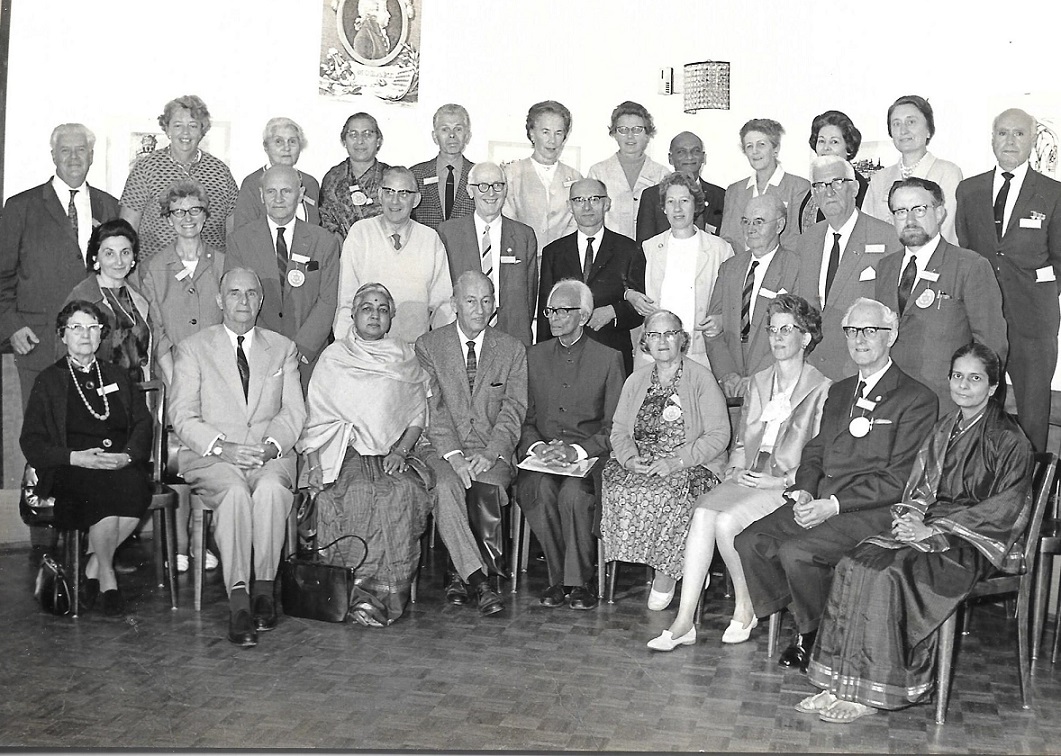 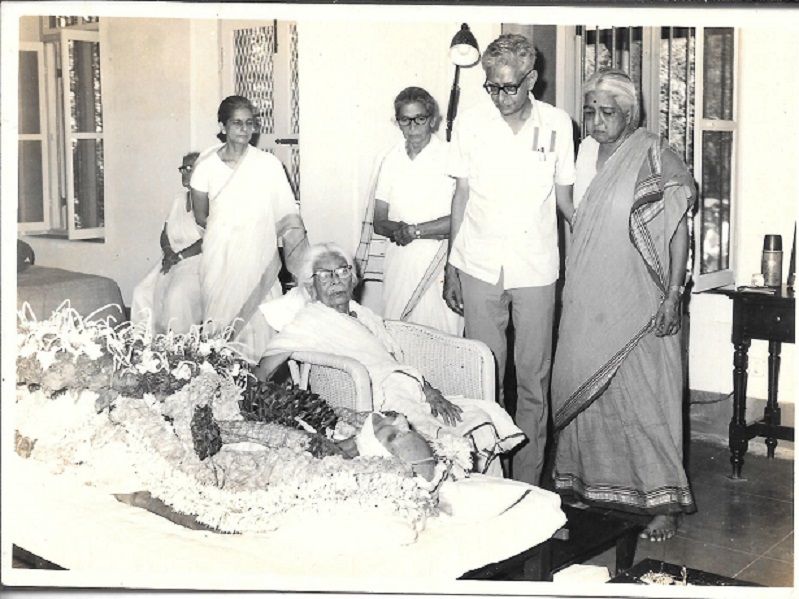 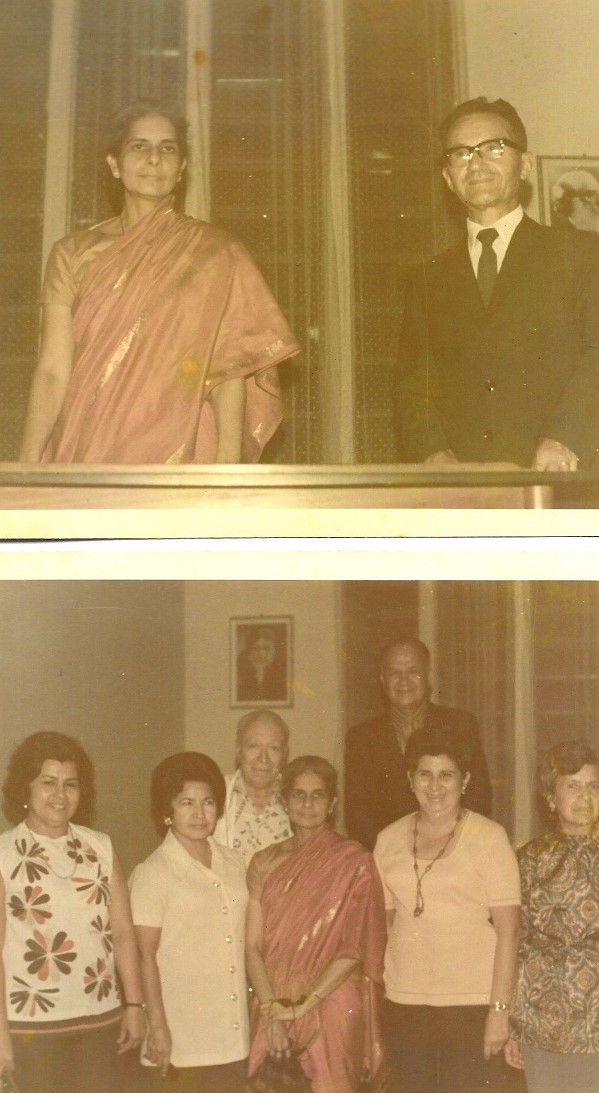 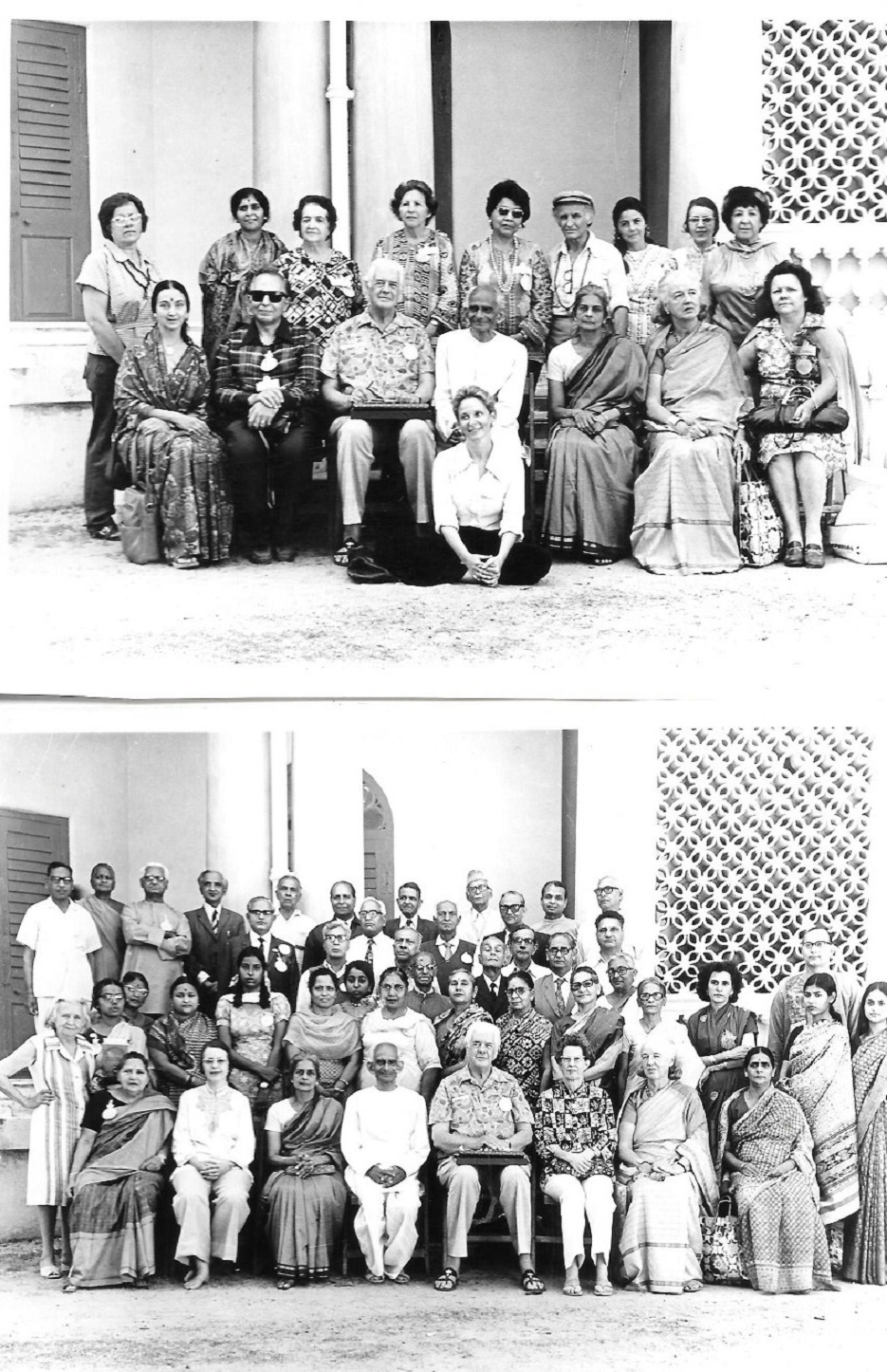 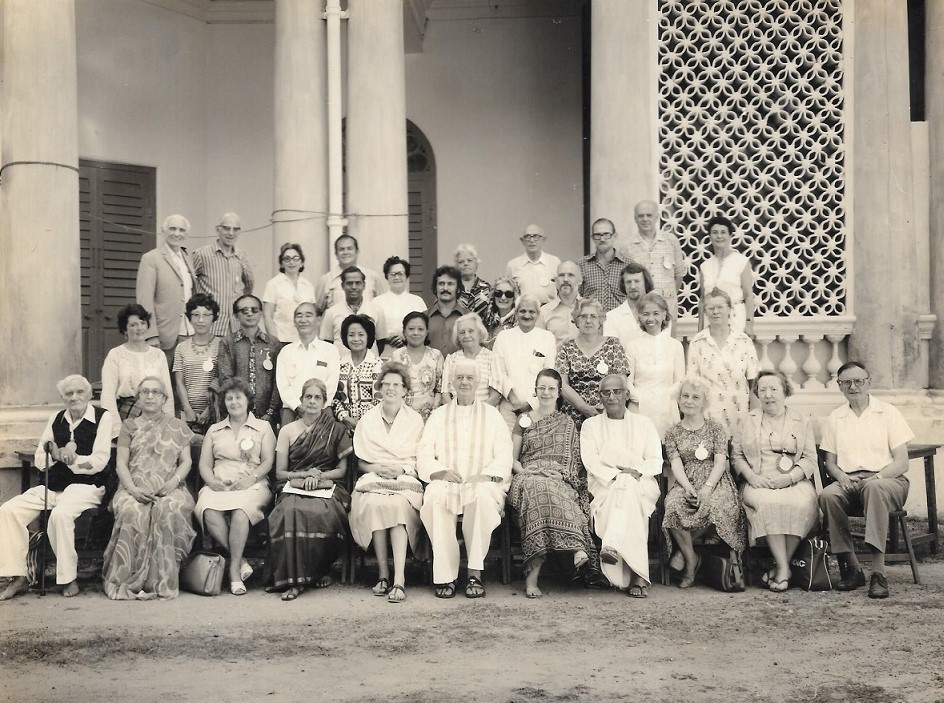 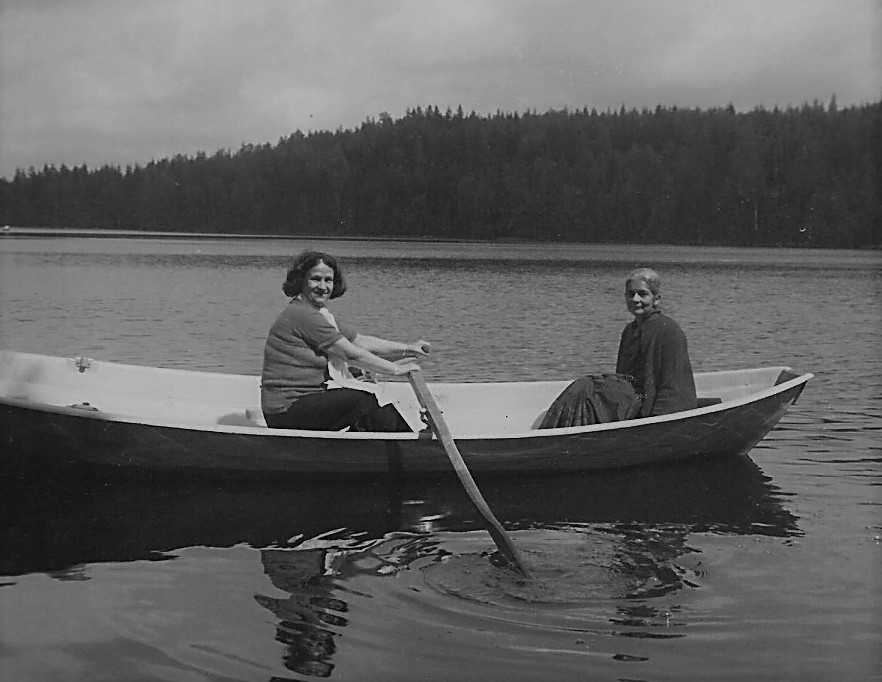 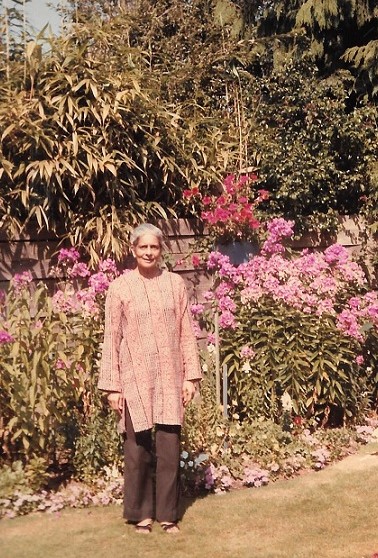 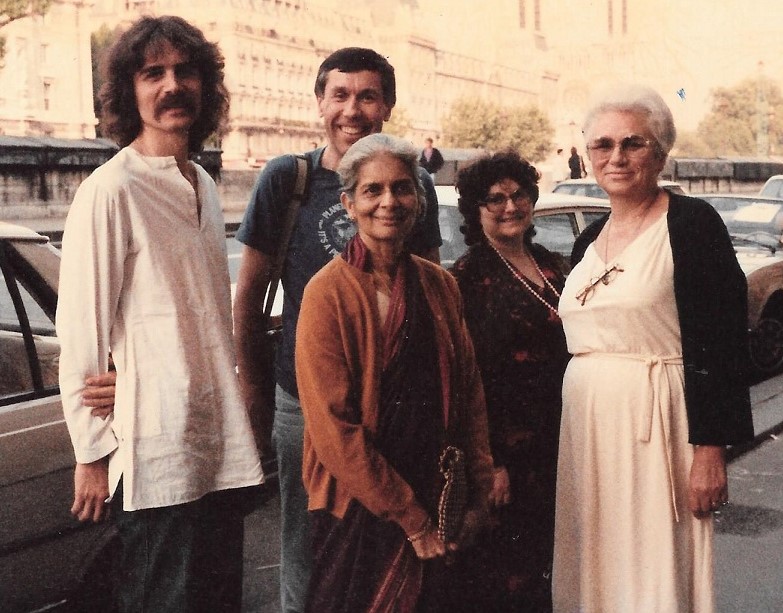 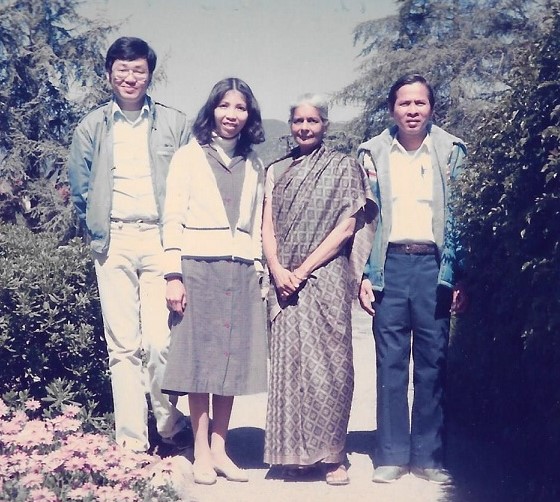 Unique photo: Radha with  members of the TS Vietnam at Krotona, Ojai. End of March 1985 .The couple on the left (photo) are, Chanh Cong Huynh and his wife: Bach Nhan Phan ,the gentleman on the right is Nghia Nguyen, who still works at Krotona as a gardner 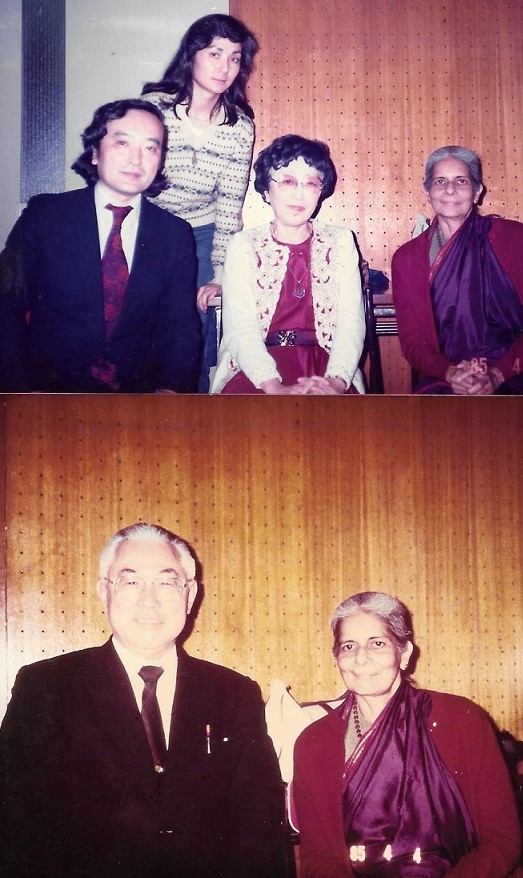 On top: In Tokyo Radha with Tomako, Emiko & Sakurabayashi 4th April 1985. Bottom: in Tokyo with Kavemura

Radha with a group of students from Spain at Olcott in Wheaton. Next to her Miguel  Charneco from Puerto Rico, The year:1986 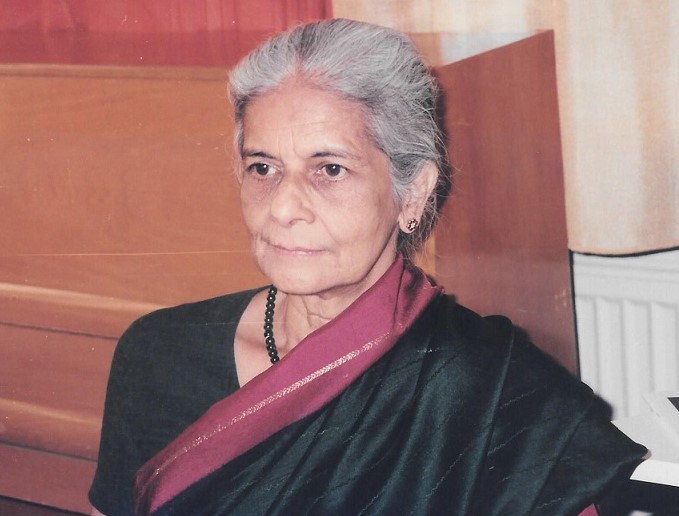 A compemplative Radha in Germany, The year: 1990 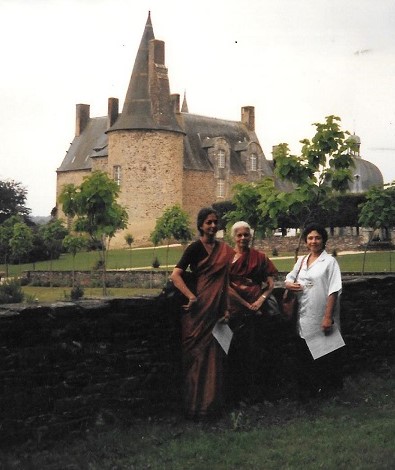 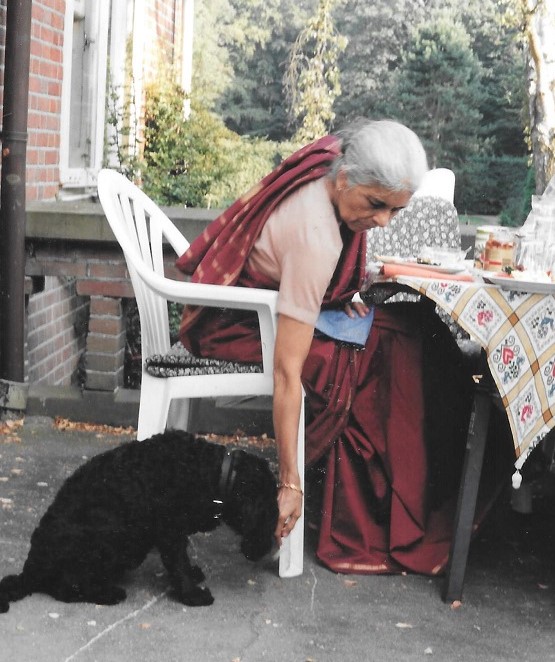 Radha and a dog having lunch at the International Theosophical Centre in Naarden the Netherlands. August 1995 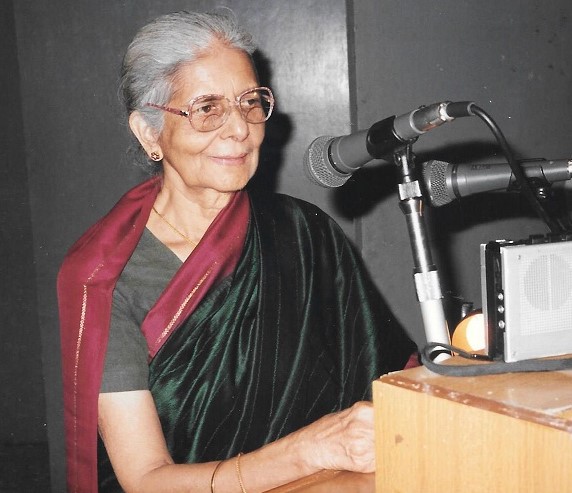 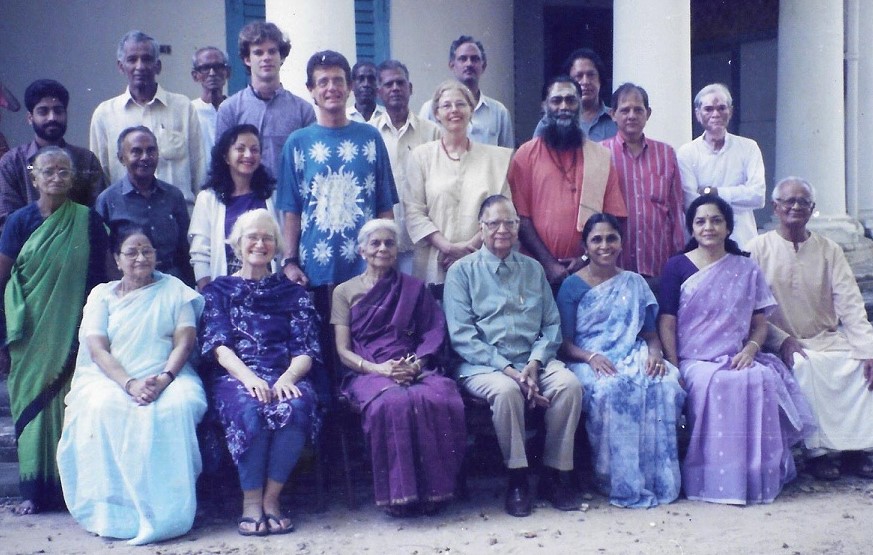 Many folks here: The School of the Wisdom, session January, February 1999. At the front we see from left to the right: Saraswati Narayan,Mary Anderson (who conducted the School) Radha Burnier, Surendra Narayan, Radha Muthaiah, Kusum Galada and  A Kannan. Furthermore your editor stands there too, next to his wife Terezinha in the second row 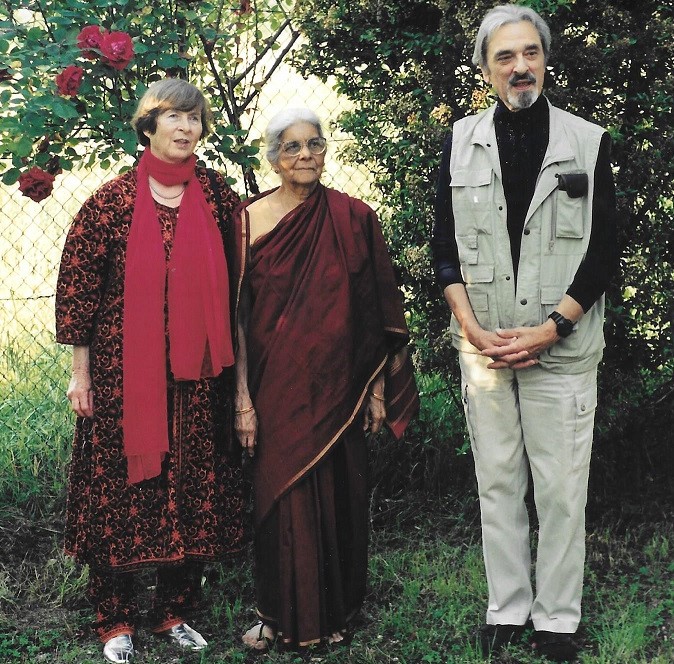 At the International Center of the Theosophical Studies & Research with its President, Adriana Volpato & its founder, Renato de Grandis, in Cervignano, Italy. May 2002 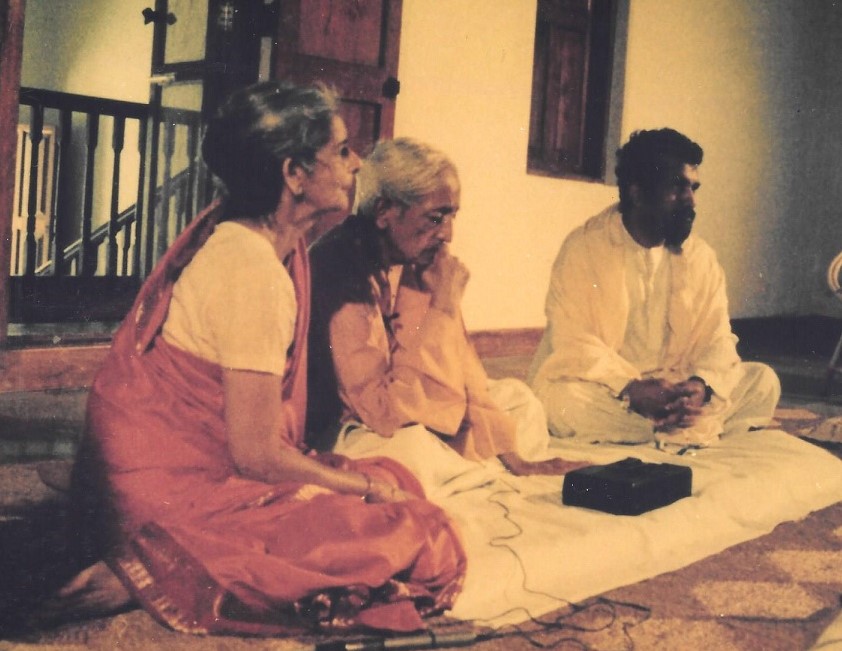 J. Krishnamurti and Radha at the lecture hall in Vasanta Vihar 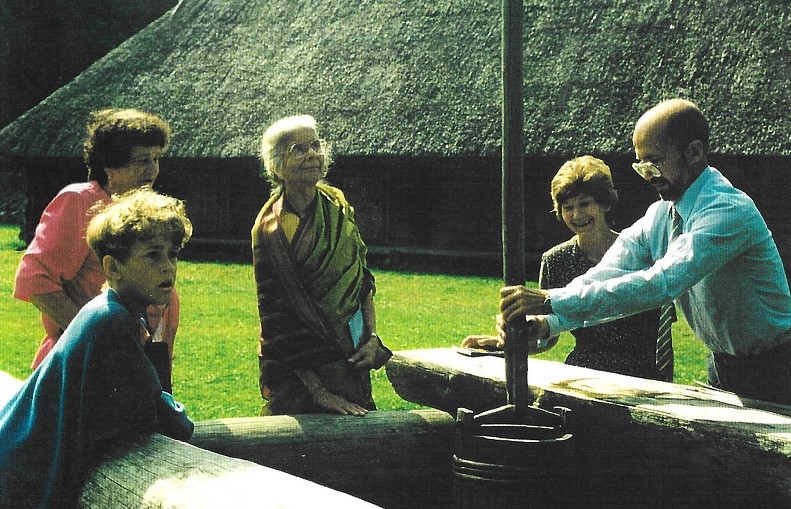 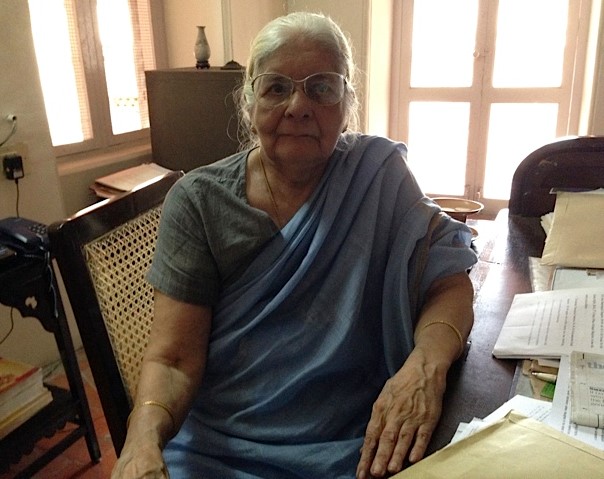 Probably the last photo of Radha, taken by Dr. Eugene Jennings from New York, while visiting Adyar in the beginning of October 2013. Every picture tells a story. Radha worked tirelessly until the very last moment. Just look at her hands and the pile of papers on her desk: larger fonts, so it would be easier for her to read drafts for The Theosophist. Thanks so very much and bless you Radha!