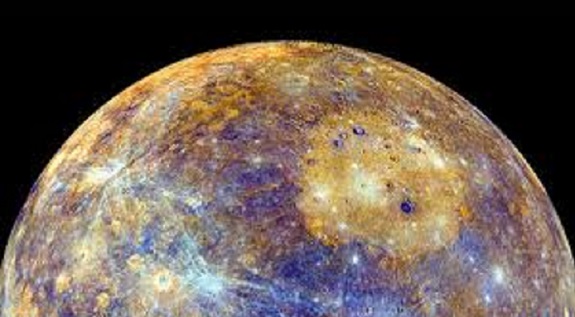 Intra-Mercurial Planets. The Mahatma Letters state that there are planets inside the orbit of Mercury. “We know that such exist and where they exist; and that there are innumerable planets “burnt out” they say, — in obscuration, we say; — planets in formation and not yet luminous, etc” (ML, p. 325).

Mythology. In Roman mythology, Mercury is the messenger of the gods, equivalent of Hermes in Greek mythology. He is depicted as a god with winged hat and winged feet, and carrying the Caduceus. He is the son of Jupiter and Maia. Mercury corresponds to Budha (son of Soma in Hindu mythology), whose mother was also Maya, as well as to Thoth of the Egyptians, Astaphai of the Gnostics, Hermod of Norse mythology and Mithra of the Mazdeans.

Esoterically, Mercury is one of the three planets representing the initiators, together with Venus, and the Moon. This is said to be the origin of the three Magis or wise men associated with the birth of Jesus. Mercury is also one of the three important substances in alchemy, the other two being sulphur and salt. They represent the soul, spirit and body. In astrological symbolism, Mercury represents the mind or intellect, and is the planet that governs Gemini and Virgo.