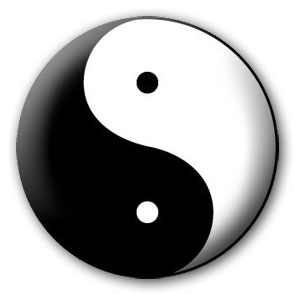 An ancient Chinese doctrine which teaches that all things in the cosmos are the products of two elements, principles, or forces. Yin is the female principle and a negative energy which includes earth, moon, water and winter; yang is the positive male energy which includes heaven, sun, fire and summer. These should not be likened to the Pythagorean duality of opposites – evil and good, forever in conflict – but are complementary parts of a single cosmic harmony which merge and interact with one another.

The idea of two complementary forces in nature is a very old one in China, since it is mentioned in the Tao Te Ching (ch. 42) and is integral to Chinese medicine, which is said to date back to the Yellow Emperor whose traditional dates are 2697-2597 BCE. But these two forces are also said to be complementary aspects of ch’i, which some feel is the Chinese equivalent of the Indian prāṇa. One of the formulators of the doctrine was Tsou Yen who lived from about 340 to 260 BCE, but most scholars feel he was just passing on ideas which he had received from others. His ideas, however, were very influential and his theory that things and history move in cycles, a very common Chinese idea, to some extent echoes one of the central teachings of theosophy.