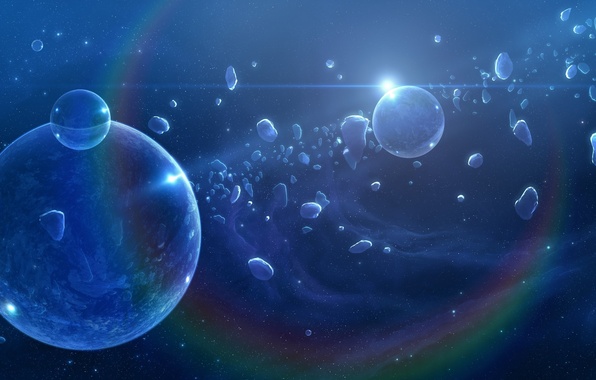 A term used in Theosophical literature to describe how matter is created by “digging holes” into space by Fohat. The Secret Doctrine states that “the great Breath digs through Space seven holes into Laya to cause them to circumgyrate during Manvantara” (SD I:147).

These holes have subsequently been described in later Theosophical writings as the “bubbles of koilon” (Annie Besant and Charles W. Leadbeater) which are seven on the Ādi plane, 49 bubbles on the Anupadaka plane, 2,401 on the Ātmic plane, and so on until it becomes about 14 billion bubbles on the physical plane (496), representing the bubbles of an ultimate physical atom (aṇu). Koilon is the term used in Occult Chemistry to describe the finer aether of Space. Hence the bubbles, which constitute matter, are really the absence of koilon. Koilon is originally a Greek term meaning “heaven.”

The term “bubble” was also used by Helena P. Blavarsky to describe the mathematical point or primordial cosmic seed that contained the entire universe, identical to the Monad of Leibnitz. “This is the first bubble on the surface of boundless homogeneous Substance, or Space, the bubble of differentiation in its incipient stage” (CW XII:523).