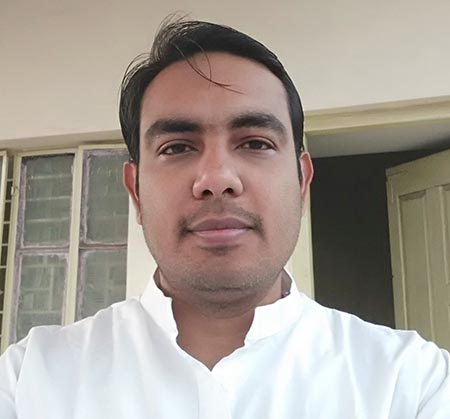 I try to do, within my capacities, whatever is needed to propagate and popularize Theosophy. In course of this journey, I have been involved in the following efforts:

i) Founder Member & former secretary of Pragya Lodge, Lucknow.
ii) Founder Member & secretary of Maitri TOS Group, Lucknow.
iii) Started a Charitable Homeopathic Clinic under Maitri TOS group.
iv) Given the duty of National Lecturer/Speaker by the Indian Section of the TS. Conduct Lectures/Study classes/Seminars/School-College visits in various parts of India.
v) Have written articles for The Theosophist, the Indian Theosophist, Dharmpath (Hindi Quarterly Magazine) & Wake-up India.
vi) Have been conducting and assisting in the Youth camps around India and especially at Bhowali, the Himalayan center of the TS.

I first came in contact with Theosophy through my mother. She has been a long standing member of the TS. She opened a TS lodge in the early nineties, while she was still working for the government, and she used to conduct weekly meetings at our home. So, that was the first time I came in contact with the Theosophical Society. I used to accompany my mother during her visits to various study camps and I became a member in 2008.

Theosophy is the key to live a holistic life. The teachings and principles of Theosophy are ALL INCLUSIVE. And only that which is all inclusive could offer a solution to any possible situation which is called a problem in any aspect of the life of an individual, society, country or the planet. Be it the problem of climate change, of terrorism, of religious intolerance and sectarian violence, violence against children, women and elderly etc. So, when we work for Theosophy and the TS we are actually performing our universal responsibility. Theosophy is the alchemy that transforms the poison of selfishness into the nectar of selflessness.

That is a very difficult question because each and every Theosophical book has something precious to offer. But still, if I have to name one book, that would be Practical Occultism by HPB (H. P. Blavatsky). The reason for that is very obvious from the title of the book. There are so many books full of marvelous concepts about Karma, Reincarnation, Planes of Nature, Bodies of (Hu)Man, detailed explanations of the origin of the Cosmos and (Hu)Man but Practical Occultism is one book that gives a very clear indication about daily life, from moment to moment, about everything one must be aware of and the pitfalls on the Path etc. And also because Theosophy can help an individual and the world only when it is practiced and Practical Occultism very clearly shows how to implement Theosophy in daily life.

I think there are many challenges that the TS is facing at the moment but most of them I see rooted in the fact that the TS has become quite invisible to the general public. Even through this is an interdependent cycle very few individuals, out of the 7 billion, have heard the name of the TS and there are even fewer members and still fewer are those motivated volunteers who are willing to take time to work for the TS. And all this with the fact that the Theosophical literature is so valuable and life changing.

But I also feel that there are alternating cycles of crest & trough and that another cycle of the crest is just around the corner, bearing in mind the all-round effort (at National and International level) in the direction of allowing the TS to register its presence by emphasizing its utmost relevance in the present world scenario.

I would like to answer this question through someone else's words whom I met a couple of weeks ago, in relation to some government work. He is also a seeker and he had heard about the book At the feet of the Master and it became a common talking platform between us. So, we offered him the book Talks on the Path of Occultism - I which is a commentary on At the feet of the Master by AB and CWL (Annie Besant and C.W. Leadbeater). He finished reading that book in 4-5 days and then he said those words which I would like to emphasize i.e., “This knowledge is so precious. It should have been dispersed to each and every corner of the world by now.”

That is my wish for the Theosophical movement that this treasure of knowledge and wisdom spread and permeate each and every corner of the world, that it finds a doorway to each and every brain of humanity.