This interview was first published in March 2012 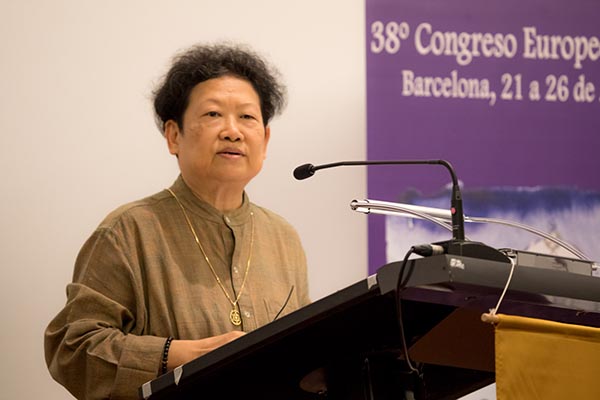 My name is Tran Thi Kim-Diêu; Kim-Diêu is the first name. I was born in South Vietnam in a Mahayana Buddhist family. I am now a French citizen. I have been a TS member since 1972.

I worked in Joan of Arc Lodge in Orleans, France, in various functions since 1976, first as librarian then as chairperson, also in HQ in Paris since early 1980s. I am the current President of the TS France and the Chairperson of the European Federation of the TS (EFTS). Functions and responsibilities basically indicate work on different levels. From 1991 till 1999 I was travelling to Eastern European countries, particularly Russia and the Ukraine, to share my understanding of the teachings of Theosophy and to make the TS Adyar known. Since then a core of TS members has developed – in Russia, in the Ukraine, but not only there. Several countries that have been parts of the Communist block have now encountered Theosophy and TS Adyar. The purpose of the EFTS is to promote cooperation between different sections, and its action consists of travels of the Chairperson and Executive members to strengthen the link. Nevertheless, TS work basically concerns acting at the local area. This means stimulating Theosophical studies in lodges and making Theosophical thinking known to the public. Recently, I have revived St John Lodge in Paris – which has a Christian background of study and reflection – and handed over the charge to one of its members. My plan of action inside the Section is to visit lodges in the provinces and settle or/and consolidate the bonds between members of the country, apart from organizing programs and conducting a monthly course at HQ in Paris. Really, I cannot answer exhaustively this question.

Difficult to say in a specific way. I think my family background, complemented with some study and research, has facilitated my encounter with Theosophical doctrine. Indeed, Mahayana Buddhist philosophy based on the concept of emptiness can be considered as one main pillar of Theosophy. Southeast Asia had basically been influenced by Taoism before the import of Buddhist philosophy. Taoism acquainted the mind with the concept of the inconceivable nature of the Supreme. I benefited from Taoist-Buddhist thinking before reading Krishnamurti’s writings during my first years of university time. Amongst these, The Flight of the Eagle particularly impressed my mind because it gave it what I may call “a taste of infinity.” All these have in one way or another influenced my approach towards something wider than any conventional religion. Contact with the Society came in due time with the encounter of the small book At the Feet of the Master, which is a shortened chapter of Viveka-chudamani, the Crest-Jewel of Discrimination. Perhaps it would be too long here to come to the whole story.

To live a right life, inwardly beautiful, while trying to share with the maximum of human beings what one has understood and applied to oneself: ethically, intellectually, and also beyond the realm of the visible; then to leave one’s action behind as nothing in order to go further in the depth of consciousness. To make a résumé, I would say (NB: here is a request to those who want to quote: when you quote, tell from where and quote this whole paragraph in red and not chop it into segments) that there are three types of LSD: one is a toxic chemical substance with hallucinogen effect, the two others are all Theosophical.  The first Theosophical LSD is composed of “to look, to see, and to drop”; it prepares genuine students of Theosophy to learn awareness in looking, integrity in seeing, and letting go in dropping. The second Theosophical LSD is made of “to love, to serve, and to die”; this would train the workers to learn to forget oneself, to do service, and to lead the personal ego to complete disappearance.

I don’t have any. Any writing that brings understanding, inspiration toward insight, and “not chewing over” is good and useful.

Challenge is the defining factor of life. In fact, life itself is a challenge. Every individual has to face diverse challenges: illness of several types related with different ages, circumstances, events, etc. The Society is a collective body which also has to face different challenges. From the founders up till now, every epoch of its existence has its own challenges.  In HPB’s time, the challenge was the Coulombs and the Hodson Report. At the time of the first President, Colonel Olcott, the challenge was the schism of the then American Section breaking away with William Quan Judge’s followers. During Annie Besant’s presidency, her proclamation of Jiddu Krishnamurti as the Messiah was a big blow to many members. George Arundale seemed to testify for the breaking off with Krishnamurti. The fourth President, Jinarajadasa, was the only one who wisely handed over the presidential charge to Sri Ram, knowing that he would not survive a second term.  Under N. Sri Ram’s presidency things went quite smoothly; was it not because he acted wisely with detachment? John Coats didn’t live long enough to have his challenge. A challenge is always an unexpected situation – provoked by unexpected events – that demands an exceptional attention and an utterly creative mind. In any challenging situation, members were expected and supposed to act according to their understanding and not according to their interests or expecting interests. This idea is neither fully idealistic nor merely wishful. It is Theosophical and ethical. Acting according to one’s understanding is acting with integrity, even though this understanding might be wrong or insufficient. Acting according to one’s interests or expected interests is acting like politicians. The challenge of all times lies in this inner attitude. This is also the challenge of the Society today.

I am convinced that the future of the Society does not lie in the number of the members. So I do not wish it to be enormous; though the current size is far from being satisfactory. Its future lies on the true deep sense of responsibility of each of its members to study Theosophical teachings, to understand them, and necessarily to realize them in one’s life. The members can study and learn how to present the teachings to the public; this goes without saying because, however ignorant one may be, one can still teach someone who knows less. Similarly, however knowledgeable one may be, one can learn from those who are more knowledgeable and above all wiser. Everyone can learn to be humble, sensitive, and intelligent. But your question concerns the Theosophical movement and not specifically the Society. I have been serving the TS Adyar and do not know much about the other Societies. Yet, taking the word “movement” as the whole stream of Theosophical thinking inside the evolution of human consciousness, I think that the movement would survive if those who are in the lead would favor the harmonious balance of the eclectic aspect and the zetetic* aspect. Indeed, mere intellectual knowledge is not enough however extensive it may be; intellectual knowledge – in order to earn its value – ought to be confirmed by a profound understanding, a deep inquiry, and a genuine experience in the depth of consciousness. Therefore, if the eclectic is overwhelming, the Theosophical movement would become another discursive intellectual current in the history of our civilization, and if only the zetetic is favored, the movement would turn out to be another kind of contemplative order.  Theosophy must be the “corner stone for all future religions.” Therefore, the Theosophical movement, and particularly the TS, has the duty (dharma) of hosting and nurturing Theosophy so that the future religions could properly emerge from its holistic philosophy in its width and depth. Thus, the balance of eclectic and zetetic is essential and vital for the survival of the whole movement. What applies to the whole movement naturally applies equally to the Society. So I wish and hope that all the leaders would endeavor to realize this balance for the movement and the Society.

[*Zetetic as an adjective means "inquiring, investigating" and "proceeding by inquiry or investigation," or, as a noun, "inquirer." It is used in Mahatma Letter 65 (earlier, 11), where it contrasts with “Eclectic,” referring to the Simla Eclectic Theosophical Society.]