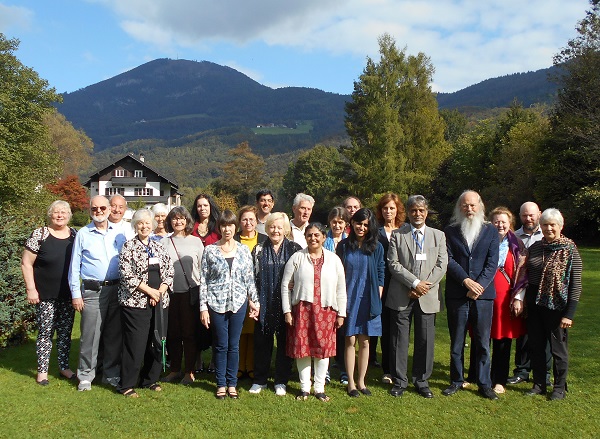 Report on the European School of Theosophy held from 6th – 11th  October 2016 in Salzburg, Austria

This year the EST was organized at an excellent family hotel in Salzburg, Austria, the birthplace of the famous composer, Wolfgang Amadeus Mozart. The hotel was situated at the outskirts of the town, so one could easily go for a little walk in nature between the sessions of the school program. The five-day program, which started with an evening devoted to classical Indian music, had ten lectures, seven study sessions and a movie of Mozart’s opera “The Magic Flute”.

The South Indian classical music from the Karaikudi tradition founded by Brhaddhvani was performed by a pupil of Dr. Subramaniam on a traditional string instrument, called the Vina.
The artist also gave a talk about how this instrument was played in ancient times, when the Brahmin priests and mystics were singing the Veda’s.

The different subjects treated by the six teachers of the school were:

“The Road that Leads to the Heart of the Universe”, “Spirituality and Comics”, “Reflections on our Mortality: The Ancient Art of Good Life”, “The Magic Flute Unveiled”, “H. P. Blavatsky on Karma, Reincarnation and The Doctrine of the Heart”, “H. P. B. The example of a true Philanthropist”, and “Healing by Tapping, An Eastern Form of Medicine”.

The lectures and study sessions were of good quality and the exchanges of views often were lively and entertaining. The items of study chosen were about the most difficult Theosophical concepts contained in The Secret Doctrine and other writings by H. P. Blavatsky.

Total number of participants was 22 with 10 different nationalities. During the first days there was a kind of segregation along language lines at the restaurant, but in the second part of the school the group had become so dynamic, that all languages mixed. A very rich experience indeed. The organizers have to be congratulated with the success of the school, which has been able to continue the tradition of high quality theosophical teaching with a strong musical inclination.

Sunday afternoon was free and one could take the bus into town to see the city of Salzburg with the birth house of Mozart and other interesting sights.