Note from the editor: this message was distributed my Mr. Vic Hao Chin from The Philippines not so long ago. I find this initiative of his so special and significant, that I have decided to print the message in full.

In line with the government's implementation of Senior High School grades, Golden Link has opened Grade 11 class, with about 40 students in the class, mostly transferees from public schools. Due to the addition of Grade 11, there were no high school graduates in almost all schools, hence the GLC College Department did not open first year college for this year. Thus, our college students this year consists of 2nd, 3rd and 4th year students. Next year, Grade 12 class will be opened, thus no graduation again for high school.

The TS International Headquarters has issued a charter creating the Golden Link Theosophical Lodge. It was formerly a study group composed of teachers, staff and students of Golden Link. The Lodge meets twice a month every Saturday at 5pm. The members take turns in being the discussant on specific topics, such as the Existence of the Masters, Karma, Reincarnation, Existence of God. The photo below shows a lodge meeting with a guest speaker, Gerard Brennan of Australia, who is now the President of the Indo-Pacific Federation of the TS. Gerard came to Golden Link College to volunteer to teach English for two weeks. He has been coming to GLC almost every year for the past six years as a volunteer teacher. 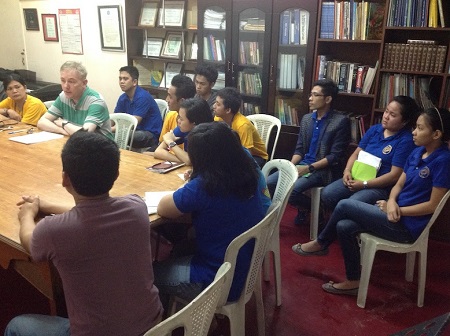 The photo above shows a lodge meeting with a guest speaker, Gerard Brennan of Australia, who is now the President of the Indo-Pacific Federation of the TS. Gerard came to Golden Link College to volunteer to teach English for two weeks. He has been coming to GLC almost every year for the past six years as a volunteer teacher

This school year, the population of our five schools has increased to a total of 941.

This year, GLC again received a substantial grant from the Theosophical Order of Service (USA) and the Kern Foundation about US$40,000 as their support for the operations of GLC. This is the fifth year where the TOS USA and Kern Foundation has been assisting GLC. The fund is used for scholarships, faculty development such as in sponsoring them to pursue M.A. and Ph.D. degrees, upgrading of computer and science laboratories, additional collection for the library, etc. Golden Link has been very grateful for this generous support because it received.

The Philippine Commission on Higher Education (CHED) has approved scholarships for five of the faculty members of Golden Link to avail of government scholarship for higher studies. Four of them are pursuing their Masters degrees and one for Ph.D. in Education.

In addition to the above, Golden Link itself sponsors its faculty members to pursue Master degrees in education among its teachers in the Basic Education Department.

Twelve schools from various states in India sent more than 40 representatives for two days. They reported on their school status, and a planning session was made on their visions and plans for the next three years. The conference discussed three objectives: 1. approaches in making the existing schools into theosophically-oriented schools, 2. upgrading the academic standards of the schools, and 3. how to sustain the schools in the long run. Vic presented the characteristics of a theosophical school, including approaches in upgrading standards and making it an English-medium school 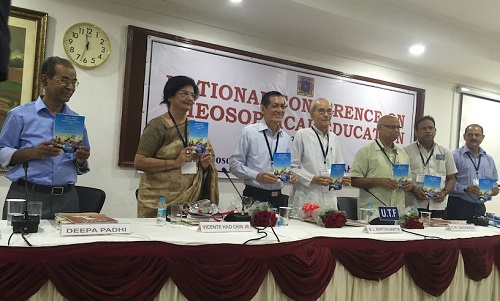 The guests of the National Conference on Theosophical Education holding copies of the translation of the booklet "Establishing Theosophical Education" released during the conference. Deepa Padhi, second from left, is the organizer and Chairman of the event. To the right are Vic Hao Chin, B. L. Bhattacharya, head of the TOS in India, and Dr. Chittaranjan Sathapathy, International Vice President of the TS

Immediately after the conference, Vic was also invited to be the Chief Guest of the TOS Regional Conference of Odisha in Bhubaneswar on September 25, 2016, where the theme was “Education for Human Transformation.”

A group photo of the members and volunteers of the TOS Group in Odisha, India

About 150 students participated in the 4-day youth camp of Golden Link held at the campus. The camp featured learning activities that were designed to lessen fear of the students, increase the capacity to love, especially to members of one's family, learn how to have effective relationship with others, learn meditation and other themes. 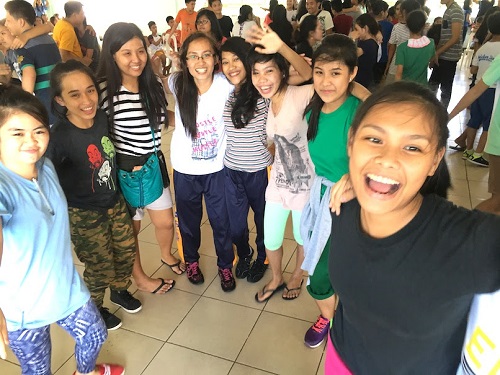 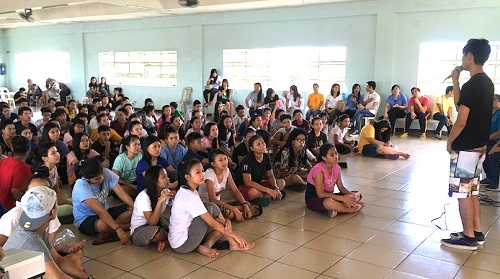 Last October, 2016, Golden Link College had two special visitors from Bangladesh: Shikha Nahar and Shuchi Musharrat. Shikha is the sister of Rekha Nahar, the Administrator of GLC who had lived in the Philippines for 27 years as a TOS volunteer. Shuchi is the daughter of Shikha. 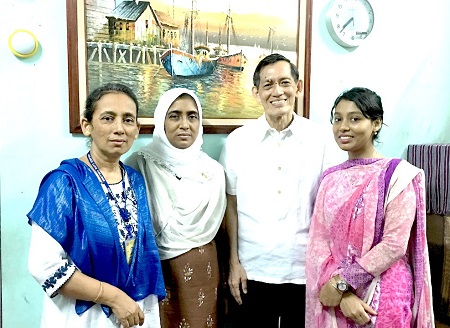 The Personal Development Class of Grade 11 held a closing program where each one of them spoke about how they were changed by the class. Many spoke about how they lost their fears, improved their relationship with the family, became less stressed, and became happier individuals. They made a video of their efforts to individual say "I love you" to their parents, something that most of them had never done before.

During the program, three visitors arrived, Mr. and Mrs. Kenneth Chua of Chicago and Willison Yu. They had heard of Golden Link College and wanted to see things for themselves. After the program Kenneth spoke of how impressed he was with the students and the school curriculum. After the meeting, he proposed to fund an entrepreneurial activity where he will personally guide the students on how to start and run a business. 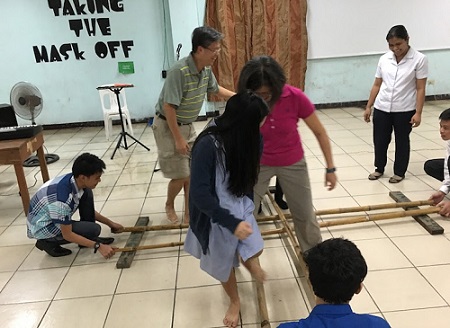 Mr. and Mrs. Kenneth Chua trying it out with the Tinikling bamboo dance

GLC again held its annual free Summer Class for the community for one month last April and May, 2016, focusing on English Proficiency and Personality Development. More than 600 students enrolled in the free classes, mostly coming from students in public schools. On the last weekend of the classes, all the students delivered speeches one by one in front of a large audience consisting of parents and members of their family. 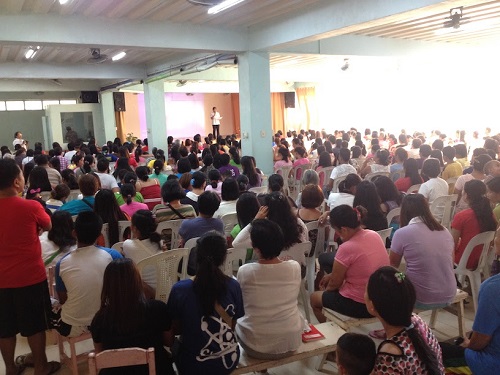 Orientation session for parents during the summer class 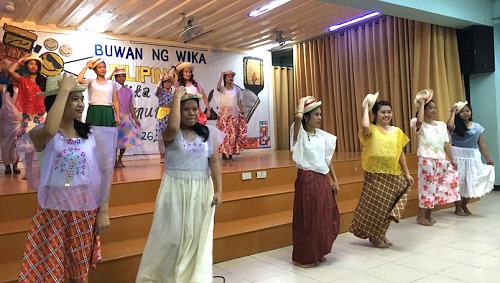 March is the month of graduation of Golden Link, with graduates on four levels: College, High School, Elementary and Preschool. 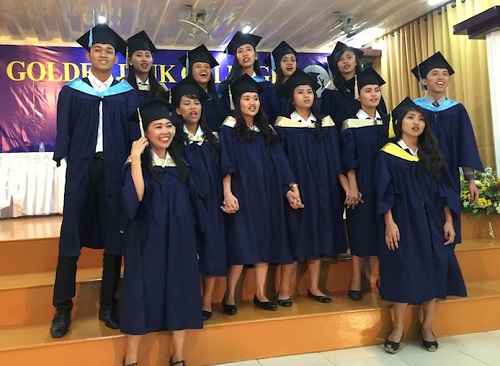 Thirteen graduates of the college department. Four of them became new teachers of the elementary and high school departments of Golden Link College 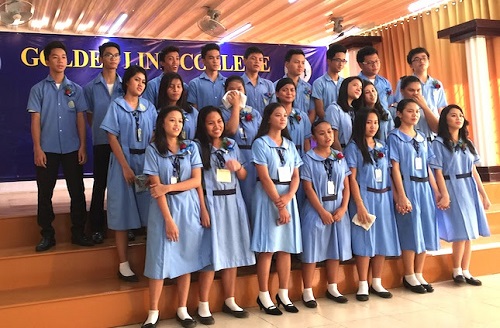 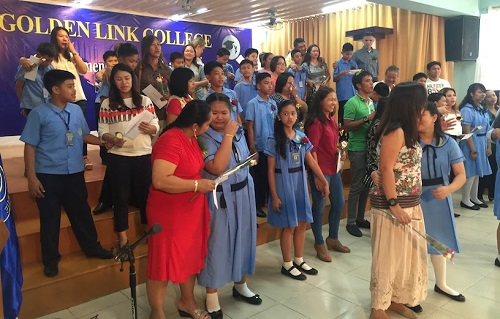 Graduates of Grade 6 honoring their parents

GLC held the annual series of Declamation Programs on all levels from preschool to college, where all students go to the stage to deliver a poem, a story, a speech or a dramatic presentation. All of the more than 500 students of the school participated with the parents invited to witness the program. The programs took more than two days to complete. 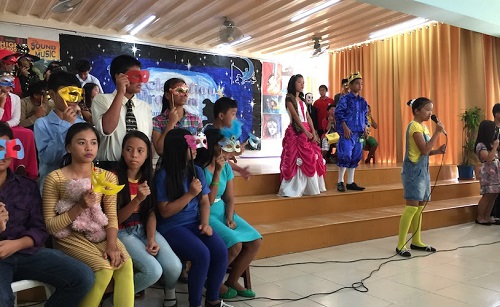 This year's Declamation Program featured episodes from famous musicals and movies such as Les Miserables, Sound of Music and Disney movies\

Buddhist monks from the Plum Village Hong Kong came to Golden Link College to conduct mindfulness training to students. This was the second time that they have conducted it. The Plum Village community was founded by Zen Master Thich Nhat Hanh of France. 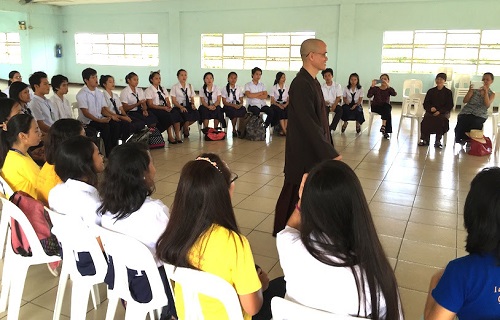 In addition to Gerard Brennan, GLC also had many visitors from foreign countries in the past one year. Last March, 2016, GLC had two visitors: Sonna Bellapia from India and Beverly Parker of Australia. Sonna was introduced to GLC by TS President Tim Boyd. He helps the Olcott Memorial High School on English training of teachers. He came to get to know GLC education better.

Last February, 2016, a theosophist from New Zealand, Lara Sell, also came and attended the classes of the college department. She is the daughter of Richard and Renee Sell, two theosophical leaders in New Zealand.

A family from China, Alex and Jane Wang and their son, Rain, from Ningbo, China, came also to GLC to attend classes for a brief period. They have heard about how GLC teaches English and they came to improve their English as well as to experience the school culture of GLC.

Last November, 2015, Mr. and Mrs. Mahendra Singhal in India came to GLC and gave a talk to college students. Bro. Mahendra was formerly the international Vice President of the TS.

Another visitor from Spain was Salome Chica Arnau, who came to the Philippines to learn more about theosophical education as well as attend the Self-Transformation Seminar. 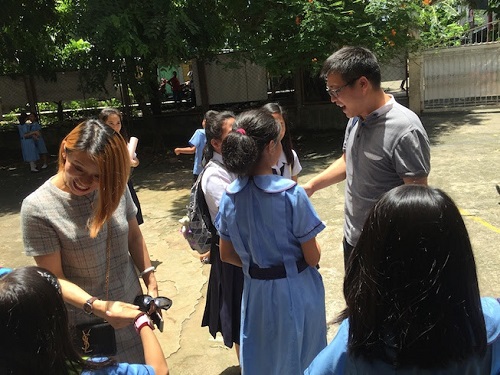 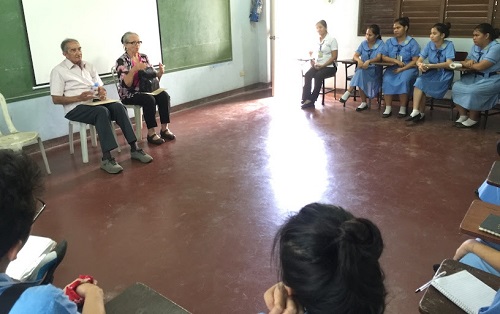 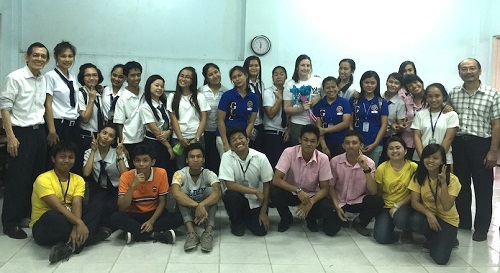 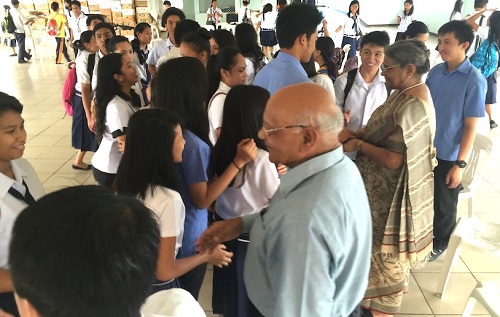 Bro. Mahendra Singhal and his wife interacting with the college students of GLC during the circle time where Bro. Mahendra spoke to them about guidelines in living

Salome Chica Arnau (seated, eighth from right) of Barcelona, Spain, attended classes of GLC and is here in the group photo with college students

GLC-TOS External Scholars Increase to More Than 100
The number of scholars sponsored by GLC and TOS among students of nearby public schools has increased to more than 100. These students are provided with their needs such as shoes, bags, school supplies. They are also tutored by GLC college students during Sundays. Once a year, they are also trained in public speaking and they deliver their pieces in front of their parents and members of the family.

Students from public scholars sponsored by GLC and TOS hold their annual Declamation Program where they individually deliver their pieces. They were trained and coached by college students of GLC

College students of Golden Link arranged for a weekly vegetarian soup kitchen for poor families at the San Vicente Ferrer TOS building. There is a high population of very poor people in the area who are unable to have daily meals. The GLC students cooked and served the food. This is an offshoot of the one-semester Self-Transformation class they had in GLC. 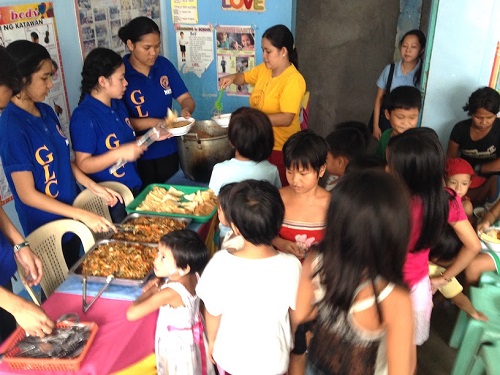